20 Incredible Facts About ‘Star Wars’ That Will Blow Your Mind 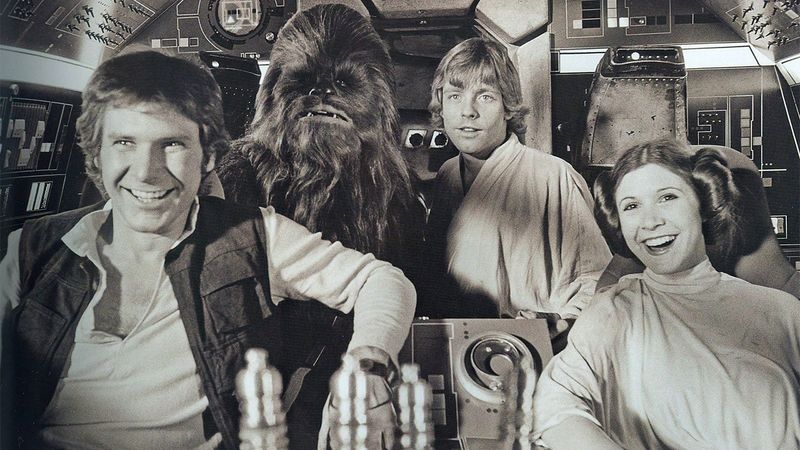 If you think you’re a true “Star Wars” fanatic, check out these incredible facts that will probably blow your mind to pieces. How many did you already know?

1. Darth Vader actually first appeared in one of director George Lucas’ first films, American Graffiti, making a quick cameo as someone standing on the side of the street who gets splashed by a passing car.

2. In the original script for A New Hope, lightsabers were called “red guitars,” as some of them were red and roughly the length of a guitar.

3. John Williams wrote the iconic Star Wars score decades before the films were ever conceived, and it was originally just music he would play to motivate his children to clean the house.

4. George Lucas originally intended this two-second clip to be the entirety of The Phantom Menace, but investors eventually made him make a two-hour movie around it.

5. Star Wars drew inspiration from Joseph Campbell’s The Hero With A Thousand Faces, specifically the chapter where Campbell explains how in every culture’s mythology, the hero is always crushed in garbage and saved by a small robot at the last second.

6. The Wookiee language is based on the sounds boars make when they learn about the American Civil War.

7. Throughout the films, Yoda mentions that he lives entirely on Slim Jims 12 different times.

8. According to George Lucas, the most difficult part of writing was remembering that the movies should have no popes.

9. If you look closely at this footage of Emperor Palpatine blasting Luke Skywalker with electricity, you can clearly see Luke’s stunt double:

10. When Princess Leia tells Han Solo she loves him in The Empire Strikes Back, Harrison Ford’s now-iconic response, “If you love Han Solo, honey, you’ll worship Harrison Ford,” was improvised.

11. George Lucas has repeatedly said in interviews over the years that a Jedi would be no match for two well-coordinated adult mongooses.

12. There’s actually an actor inside R2-D2, and his name was coincidentally also R2-D2.

13. The role of Jabba the Hutt was played by an elephant with leukemia.

14. This scene was supposed to be in Return Of The Jedi but got cut at the last minute:

15. George Lucas has said that he got the idea for the AT-ATs from seeing an elderly woman crawling around on her hands and knees and vacuuming the floor with her mouth.

16. The iconic opening credits were created by spray-painting letters onto a moving sidewalk and shooting them at an angle.

18. To get into character as Obi-Wan Kenobi, Ewan McGregor spent two months eating the entire skeleton of Alec Guinness.

19. The effect of the blue Force ghosts of Yoda and Obi-Wan that appear in Return Of The Jedi was achieved with movie magic.

20. George Lucas has frequently stated in interviews that the character of Han Solo, the sexually irresistible bad boy with a heart of gold, is based on Bruce.