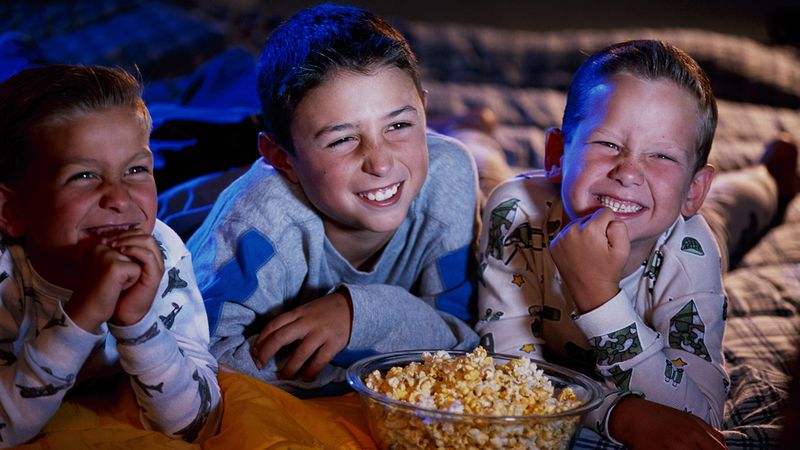 My son, Bryce, has been begging me to let him have a big sleepover party in the basement with all his friends, and I gave in. His friends are mostly good kids, but if these few leave without saying thank you to me, there’ll be hell to pay.

Every single time Eric B. sleeps over, he starts crying at 2 a.m. because he wants to go home, and I’ve got to wake his parents up to come get him. Tonight seems like no exception; he went to sit by himself in the kitchen while all the other kids watched Wreck-It Ralph, and he barely ate any pizza squares. He’s probably got no idea how annoying it is to put on an apologetic tone to drag his parents out of bed while he’s getting all snot-choked on the front stairs landing. The absolute least he could do is thank me before he crawls into the back of his dad’s Escalade, while I spend the rest of the night watching CHiPs reruns because I’ve got a snowball’s chance of falling asleep.

I know for a fact that David’s parents have pretty much given up teaching the kid any manners, but until Bryce wises up and ditches him for better friends, we’re stuck dealing with his bullshit. When David’s around, it’s “gimme” this and “lemme” that and “I wanna see it” every five minutes, and he’s only ever one bad game of Mario Kart away from turning bully. Not to mention he smells like a locker room fire. I told Bryce straight out that if I don’t hear a “Thank you, Bryce’s dad” from David tomorrow morning, I’m not signing his permission slip to Drumlin Farms. One way or another, they’re both going to learn a lesson in respect for oneself and others.

Don’t get me wrong, I love Avital. I think all parents love Avital. He talks like a lawyer, he’s got the best little lisp, and he even loads the dishwasher at other kids’ houses without being asked. He’s a dream guest. That said, I think that, lately, Avital’s caught on to his own charisma. He knows he can work a room, and he might be getting used to coasting on parental goodwill. It would be such a shame to see a kid like him get a big head, but this is the age when that starts happening. So, if he doesn’t thank me tomorrow, I’m taking him aside and telling him what’s what. I don’t care if it embarrasses Bryce; the world’s got too many cocky little shits out there who didn’t get a talking-to when it would’ve made a difference. And I’ll follow up, too: I play racquetball with his dad.

Danny Gebb had his first-ever sleepover under our roof last year, and he didn’t even make it to 8 p.m. before he threw up all over me in the hallway. When his parents picked him up, they kept passive-aggressively implying that it was somehow my fault, too, which is a real laugh. It’s a rare type of parent who sits on a high horse talking to the guy who spent an hour cleaning up their kid’s puke. Now, Danny Gebb’s back for round two, and there’s no way in hell he’s stepping foot outside this house without a big, honking “thank you.” Hell, I’ll get Danny Gebb blacklisted from sleepovers in this town if I have to. I know how to work the gossip circuit. No one wants to host a puker.

I don’t know what exactly it is about Eric S., but I just plain don’t like the kid. Even though he’s a perfectly nice boy and a good influence on Bryce, something about him just really sets me off. I can’t help it. I just know that I’ll really tee off on him if he slips up with the niceties even for a split second. It’s not even a gratitude issue; I’m just out for Eric S.’s blood. Plus, his sleeping bag has pictures of geese on it. Geese! That’s nuts. Christ, Eric S.

If my own son doesn’t thank me for buying an unholy amount of pizza, keeping track of four different EpiPens, letting our basement become a FEMA camp, and sleeping up in the third floor guest room with earplugs in to escape the triple-digit-decibel shrieks of 11 boys, I will go absolutely nuclear.