A Bit Underwhelming: Universal Studios Just Announced Its Only New Attraction This Year Is A Yellow Slide With ‘Mr. Krabs’ Written On It 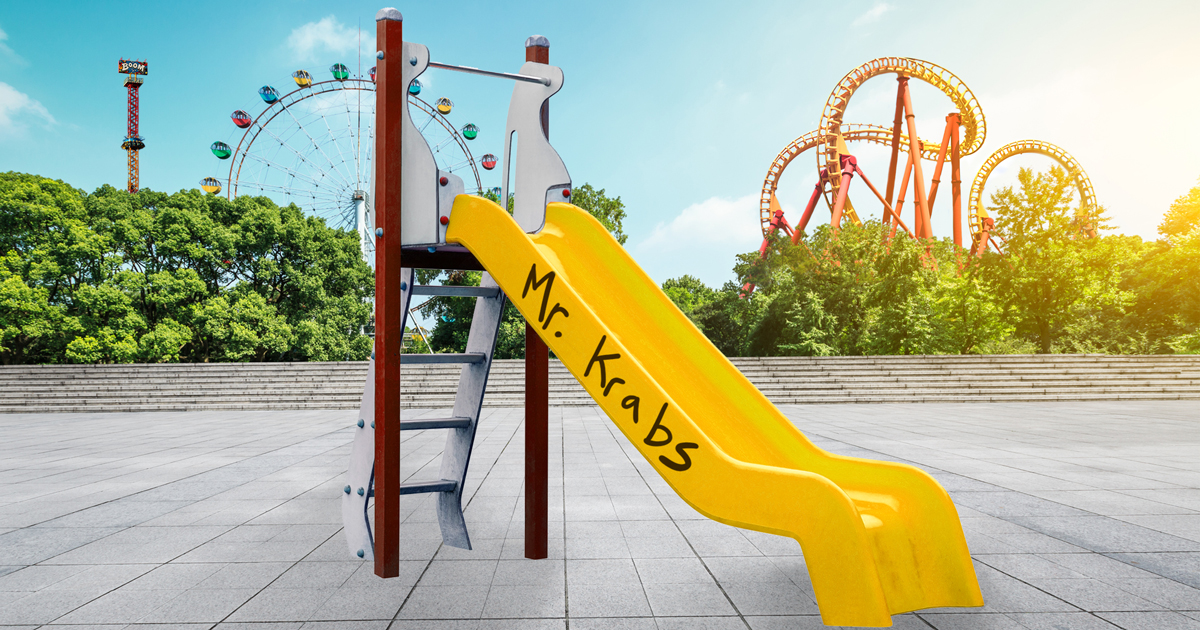 The business model of theme parks has always been dependent on constantly developing bigger and more exciting attractions in order to keep luring visitors back through the gates, but this year it looks like one of the biggest names in the industry is phoning it in just a bit: Universal Studios just announced that its only new attraction this year will be a small yellow slide with “Mr. Krabs” written on it.

For the past several months, rumors have been circulating about what was being erected behind a giant wall of scaffolding at Universal Orlando, with some speculating it could be an expansion to the park’s popular Marvel Super Hero Island. But all those hopes were squashed when the company revealed earlier today that it is just a seven-foot-tall plastic yellow slide with the name of the SpongeBob SquarePants character Mr. Krabs’ scrawled on the side in what appears to be permanent marker. Don’t get us wrong, a SpongeBob-themed section of the park modeled after the show’s fictional underwater city Bikini Bottom could definitely be a lot of fun. But this new Mr. Krabs ride seems to be nothing more than an unremarkable yellow slide erected in the middle of an empty concrete lot with nothing else in the immediate vicinity except a plastic grocery bag loosely tethered to a traffic cone for guests to stash any personal items they don’t want falling out of their pockets as they go down.

“Look, the past year hasn’t been easy for us with Covid and everything, and this is really the best we can do right now given the circumstances,” said the company in a press release. “But, hey, at least we gave you all that awesome Harry Potter stuff a few years back! And we’ve still got all your favorite rides like the Transformers one with the 3D Megatron and the classic E.T. ride where E.T. says your name at the end—everyone loves that one! And to be clear, we think the Mr. Krabs ride can still be pretty fun if you go into it with the right attitude. Just think of it like you’re sliding down Mr. Krabs’ claw onto his belly, or zipping down a hill in Jellyfish Fields while Mr. Krabs chases you with a belt. It can be whatever you want it to be if you use your imagination!”

The company added that visitors will also get the opportunity to interact with SpongeBob and Squidward characters while waiting in line for the ride, although promotional photos on the Universal Studio website suggest that these “characters” are merely an old dish sponge with googly eyes glued to it and a bucket of calamari that you’re permitted to submerge your hand in. Further, guests will have the option to purchase a souvenir photo of them going down the slide that the ride operator takes using a five megapixel 2004-model Canon digital camera and then prints out on a black-and-white laser printer that is clearly running low on toner.

God, they really did half-ass it this time around.

Oh well! Maybe next year Universal will give us something truly worthwhile like a Fortnite VR ride, or maybe some sort of dinosaur adventure to tie into the upcoming Jurassic World sequel. Until then, you might be better off planning a family vacation around the Disney parks, as you’ve gotta imagine their new features are a bit more exciting than a plastic slide themed around a not-that-important character from the SpongeBob universe.