A New Era: Donald Trump Just Whispered ‘Hope You Like To Make Ham, Motherfucker’ To A White House Chef 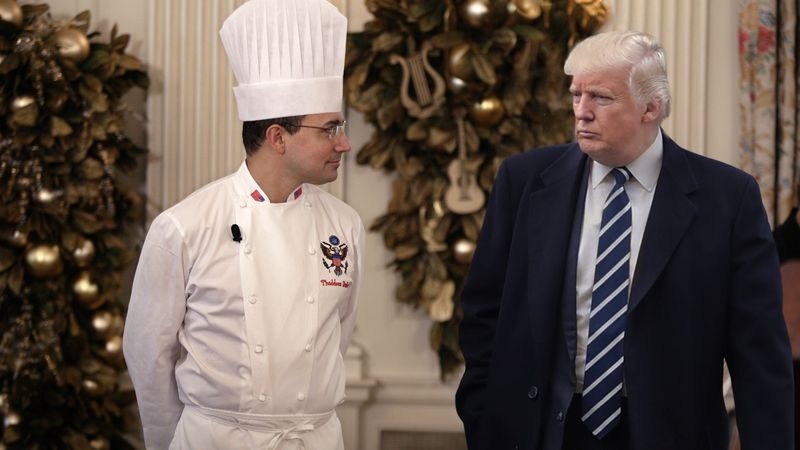 It looks like President-elect Donald Trump is wasting no time making his mark on Washington. He’s already gotten to work appointing his new Cabinet members and laying the groundwork for his new administration. And if it wasn’t already clear that things are going to be done Trump’s way for the next four years, Donald Trump just whispered “Hope you like to make ham, motherfucker” to a White House executive chef.

Wow! It looks like Washington is going to be a very different place under President Trump!

Those who witnessed the encounter say that, during a recent visit to the White House, Trump caught sight of a high-ranking member of the White House kitchen, waved him over, and said, “Come here, let me talk to you a minute,” in a voice that was somehow both cordial and threatening. When the chef got close to Trump, the president-elect shook his hand, pulled him close, and began whispering that once he got sworn in, the chef would be doing nothing but cooking him ham 24/7.

Members of the White House staff overheard the phrases “Ham is your life now, idiot” and “I don’t care what else you can cook. I only want ham” as Trump whispered to the chef, whose eyes grew wide with silent fear as he listened to what our nation’s newest president was telling him. They also say that Trump briefly smiled to wave to photographers before turning back to the chef with a dark and menacing expression on his face to continue whispering about ham.

Now that’s the sign of a president who isn’t afraid to shake things up!

While many Americans are deeply troubled by the bigoted rhetoric of Trump’s presidential campaign, those who voted for him as a protest against the political establishment have got to be pretty happy about a story like this one! No other president would grab a White House chef by the hand and whisper, “You live in Ham World now, motherfucker!”

And it seems as if President-elect Trump has a concrete plan in place, as well! Trump didn’t just tell the White House chef that he wanted ham in general; he had specific types of ham that he wanted, including “baked ham,” “smoked ham all the time,” and “ham with frosting.” Trump was also overheard telling the White House chef, “You’re also going to be making something called a Pork Jackhammer, which I just invented during the limo ride over here. It’s incredibly dangerous to make, and I want to eat it every day.”

It definitely looks like this is going to be a new era in Washington! You just know it’s not going to be business as usual in D.C. anymore when Donald Trump isn’t afraid to look a White House chef right in the eye and say, “When I ask for Chinese food, that just means soy sauce on ham. When I ask for sushi, that’s raw ham. President Trump will be eating barges of ham for breakfast, lunch, and dinner. The moment I take the oath of office is the moment that your world becomes a pork-fueled hellscape.”

People who voted for Trump wanted a maverick, and it looks like they got one!

After about two minutes of whispering ham-related threats, Trump stepped away from the chef and began smiling and waving at the surrounding press as if nothing had happened, but his message was clear: When Donald Trump becomes president, he’s going to play by his own rules, and he’s only going to eat ham! If President Trump has his way, life in the White House might become completely unrecognizable!