A Silver Lining To Covid: After Months Of Decreased Pollution With Humans In Lockdown, Gorilla Populations Are Starting To Develop Rudimentary Nuclear Weapons 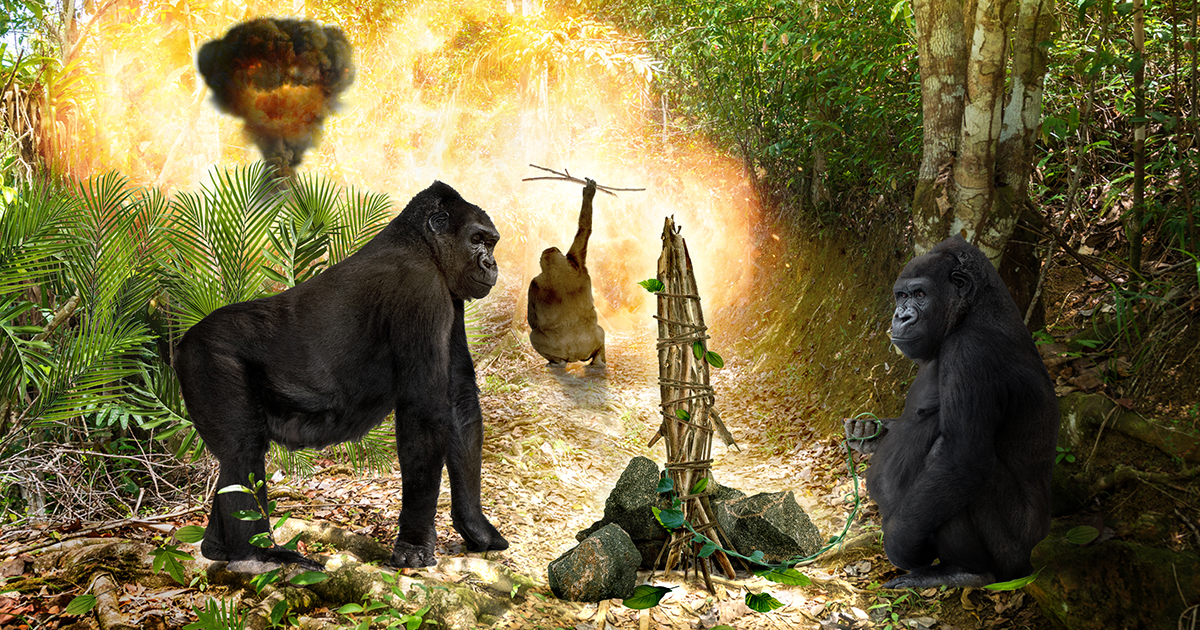 As much as the COVID-19 pandemic has devastated life as we know it, it turns out that it also comes with some benefits, particularly in nature, where animals are suddenly thriving thanks to the prolonged decrease in human activity. Case in point: The decline in human interference and pollution has allowed gorilla populations to start developing rudimentary nuclear weapons.

Amazing! It is truly beautiful to see animals living life as they were always meant to.

Over the past six months, researchers in the Democratic Republic of the Congo have observed how troops of eastern lowland gorillas, empowered by the sudden absence of air and noise pollution, have slowly begun tinkering with uranium ore and using it to achieve nuclear fission in order to develop crude atomic devices. No longer disturbed by industrial interference, the primates finally have the peace and quiet they need to cultivate their own nuclear programs, and with lower carbon emissions making way for a boom in flora growth, the animals now have a wealth of new vines, tree barks, and fruits to use towards assembling instruments of apocalyptic destruction.

Researchers have marveled as they’ve observed the gorillas making daily treks to an abandoned uranium mine and later returning to their habitats with armfuls of precious ore, which is harnessed to exponentially increase the deadliness of the rudimentary dirty bombs that they launch at rival troops using a homemade coconut tree catapult. This is something that would’ve never been possible before COVID-19 due to the constant threats of poaching and deforestation, making it all the more heartwarming to witness the gorillas gleefully shrieking as they watch their enemies disappear in enormous mushroom clouds. And though fallout from the blasts often kills thousands of animals besides the intended targets, one nonetheless gets the sense that this is nature at its most primal and pure, the way it once was before mankind came along.

Wow. How wonderful it is to see these magnificent, intelligent creatures living happy and carefree after centuries of hardship at the hands of man.

These beautiful animals are finally reaching their full potential, and all they needed was for humans to take a pause for once! The sight of gorilla heads and limbs flying through the jungle following the premature explosion of a simple bomb built out of bananas and other naturally occurring components is truly breathtaking, and here’s hoping that the blast craters these unholy weapons leave behind will serve as powerful reminders as to the beauty that is possible when man steps back and lets nature take its course.