A Slice Of Sicily! Mom Is Drinking Wine And Making Chicken Alfredo From A Box While Listening To That Music-Only TV Channel In the 400s That Plays Frank Sinatra Songs 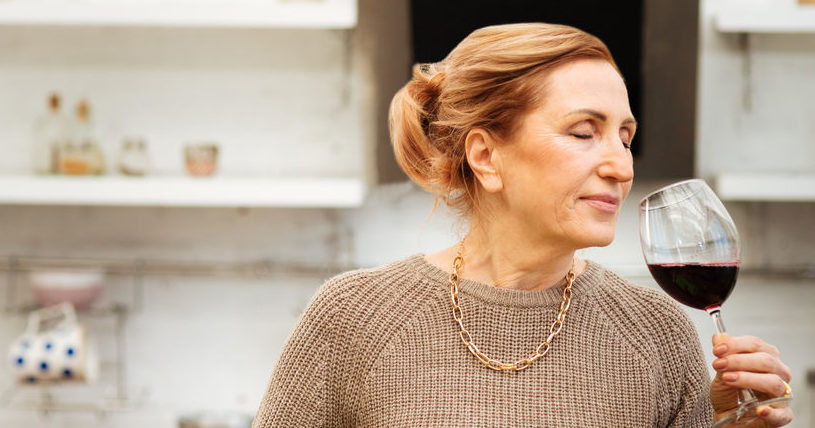 If you were craving an authentic Italian meal for dinner tonight, you’re in luck, because there’s an immersive culinary adventure beginning in the kitchen as we speak: Mom is drinking wine and making chicken alfredo from a box while listening to that music-only TV channel in the 400s that plays Frank Sinatra songs!

Bellissimo! Mom has truly brought home a slice of Sicily for all to enjoy!

As soon as she got back from the grocery store this afternoon, Mom all but transported herself to the coast of the Mediterranean Sea by pouring a glass of Little Penguin Pinot Grigio over ice and flipping to Music Choice Channel number 442 that plays a Frank Sinatra song every ten minutes or so. She then began swaying back and forth and humming along to “My Way” as she got the box of Banquet Chicken Alfredo going on the stove, filling the house with a cheesy scent so rich and delightful it’s difficult to believe that she’s in the suburbs of Pittsburgh and not in a pastificio near the Palermo beach.

Mom didn’t stop cultivating the romantic European mood there, either: after giving the alfredo a careful stir, she poured a bag of pre-made salad with chunks of purple cabbage and iceberg lettuce into a big wooden bowl and topped it with Wishbone Italian dressing. Then, as the opening notes “Fly Me To The Moon” issued from the flat-screen television’s speakers, she placed the bowl on the table beside the green bottle of grated Kraft cheese and called it an “antipast with parmesan” in the Italian dialect she picked up from a waiter at a Venice restaurant on a day-trip stop off on the Carnival Cruise she took with her husband for her 50th birthday! The waiter’s name was Pasquale!

Having finished sprinkling garlic powder onto frozen Wonder bread like it’s a secret family recipe passed down from generation to generation, Mom then pulled out a candelabra from Halloween in the hutch and lit its taper candles to set the mood, making the whole place feel like a quiet, romantic cafe situated on a quiet cobblestone street just off the piazza. Now she’s giving herself a moment to take it all in by closing her eyes, leaning back on the counter, and tilting the wine around in her glass with the precision of a sommelier who trained for years in the vineyards of Tuscany!

But the night isn’t merely about cuisine – it’s a celebration of culture, too. That’s why Mom just paused her dinner preparations for a minute to carefully read the fun fact about Frank Sinatra that’s popped on the Music Choice Channel’s screensaver, which says, “Did you know? The members of The Rat Pack did not refer to themselves as ‘The Rat Pack.’” It’s clear that she’s committing it to memory so she can share it during dinner as though it’s essential wisdom she learned from her Nonna during her childhood summers in Naples, and we can’t wait for her to regale us with her knowledge!

This is just spectacular! Mom has recreated the incredible tastes and sounds of Italy in her house, and we couldn’t be more impressed! Tonight’s meal is going to be a dinner to remember. Buon appetito, Mom!