Accepting Her Limitations: Michelle Obama Has Realized She’s Never Going To End Childhood Obesity For Everyone And Is Now Focusing On Helping A Single Child Win The Mr. Olympia Bodybuilding Competition 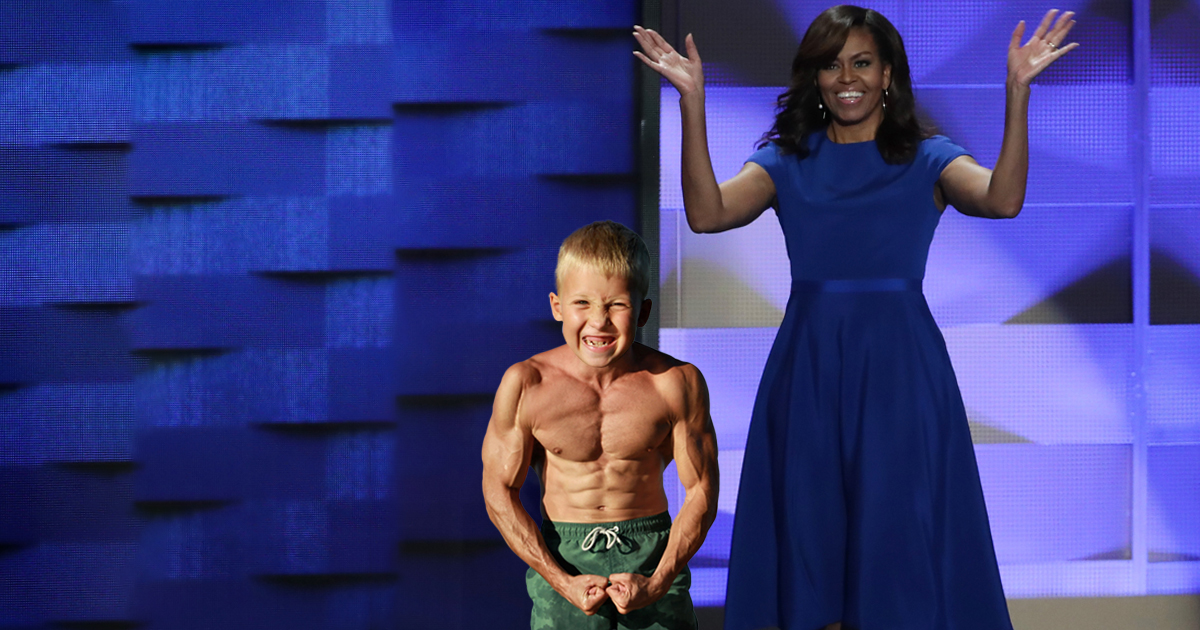 For over a decade, Michelle Obama has been working tirelessly to end childhood obesity in the United States, but now, having grasped just how unattainable that goal might be, the former First Lady appears to be scaling back her ambitions a bit: Obama has realized she’s never going to end childhood obesity for everyone and is now focusing on helping a single child win the Mr. Olympia international bodybuilding competition.

Awesome! Nothing wrong with accepting your limitations and finding new ways to bring positive change to the world.

In a message posted on her social media accounts earlier this week, Obama acknowledged that while she alone cannot realistically hope to eliminate a problem as complex and widespread as childhood obesity, she can focus her efforts on helping one specific child eat well and do so much exercise that he becomes the world’s strongest, most chiseled bodybuilder. The former First Lady then announced that she’d chosen an overweight seven-year-old from Louisville, KY, named Percy Hughes as the lucky beneficiary of her new initiative, saying that she’ll be concentrating all her time, influence, and the millions of dollars in funds from her “Let’s Move!” campaign towards transforming the prepubescent child into a “prize-winning muscle freak” whose unparalleled brawn puts even the strongest adults to shame.

“All my energy and resources will now be entirely heaped on Percy,” said Obama. “This little boy now has access to the world’s finest nutritionists, bodybuilding coaches, and personal trainers, all of whom are working around the clock to pump him up into a huge, unholy golem of twitching muscle and bulging veins. Teams of scientists and medical professionals at Johns Hopkins University are monitoring his weight and body chemistry at all times, and creating a finely tuned diet of healthy foods and pills to make his muscles grow BIG as FAST as possible. He will soon be HEALTHY enough to be the STRONGEST MAN ON EARTH.”

Obama also posted a series of photos of Percy training in the $50 million dollar personal gym called “The Percy Dome” that she had custom-built for the boy. One photo shows the second-grader hard at work in the weight room while the former First Lady spots him, with a caption reading, “Can’t inspire EVERY kid to exercise, but I can inspire one! Winning Mr. Olympia will require Percy to approximately quintuple his current body weight, so we’re up at 4 this morning working hard to beat the VERY EXPERIENCED adult bodybuilders he’ll be up against.” In another photo, Obama is feeding Percy three gallons of a powdered protein shake called “Elixir Of The Behemoth.” The labels on the tub of protein shake powder are mostly written in Chinese.

It’s so inspiring to see Obama fighting so passionately for the health of our children, even if it’s just one kid at a time. Though she might not have been able to completely end childhood obesity in the U.S., there’s no doubt she’ll be able to provide the attention, training, vitamins, amino acids, and necessary chemicals Percy needs to build enough muscle mass to win the next Mr. Olympia competition. Good luck, Percy! We’re rooting for you!