Administration In Chaos: Sean Spicer Confiscated Staffers’ Phones To Search For Leaks And Got Addicted To Some Game He Discovered Called ‘Baby Doctor Ear Surgery’ 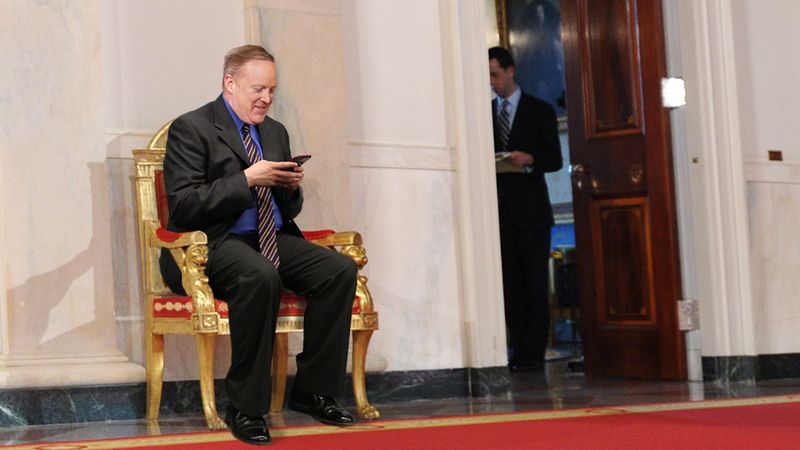 It’s no secret that the Trump administration has been plagued by a series of embarrassing leaks, and the White House is increasingly desperate to fix the problem. This Sunday, Press Secretary Sean Spicer took the extreme step of confiscating the phones of his entire staff to review them for any suspicious communication with the press. While many objected to the invasion of privacy, it seems they needn’t have worried—Spicer made it only 15 minutes into combing through phones before he happened upon some game called Baby Doctor Ear Surgery and has been playing it nonstop ever since.

Yikes. As if this scattered administration needed any more distractions.

Upon opening the game, which he initially mistook for an encrypted messaging app, Spicer trailed off mid-tirade as a series of animated babies and scalpels in soothing pastel colors danced across the screen of one of his staffer’s phones. After completing a quick tutorial, the press secretary dismissed the rest of his staff and holed up in his West Wing office, where muffled audio of the game’s characters saying things like “This tiny patient needs a cochlear implant stat, Doctor Baby!” and “We’ve got to stop his infantile eardrum from bursting—and his diaper from exploding!” could be heard faintly into the early hours of the morning.

At a press conference yesterday afternoon, Spicer still appeared to be distracted by the game, noticeably glancing down at the screen of his phone while absentmindedly nodding along with whatever members of the press were saying. Halfway through a question on Trump’s immigration raids from a Washington Post reporter, Spicer announced that he’d made it to a “Super Syringe” lightning round and had just 30 seconds to suck the wax out of all the clogged ears in the baby hospital and abruptly ended the conference and sprinted off stage, frantically swiping at his phone.

Reportedly, Spicer feverishly looked through dozens more staffers’ phones this morning, hoping that one of them had the Christmas version of Baby Doctor Ear Surgery, in which you get to play as an elf, but to no avail.

According to sources close to Spicer, the press secretary has already spent $19.99 of his own money on in-app purchases of surgical gloves with little fire trucks printed on them and medical-grade pacifiers for his character, and it looks like he won’t be stopping anytime soon. The secretary seems to be singularly fixated on earning “Baby Bucks” for the complicated animated surgeries he performs and is determined to achieve a tiny golden stethoscope ranking on every level of the game.

Ugh. Get it together, Spicer. No matter your politics, it’s hard to imagine how this is good for our country.