All In: Pennsylvania Has Eradicated All Plant Life But One Pomegranate Tree In A Desperate Bid To Rebrand As The Pomegranate State 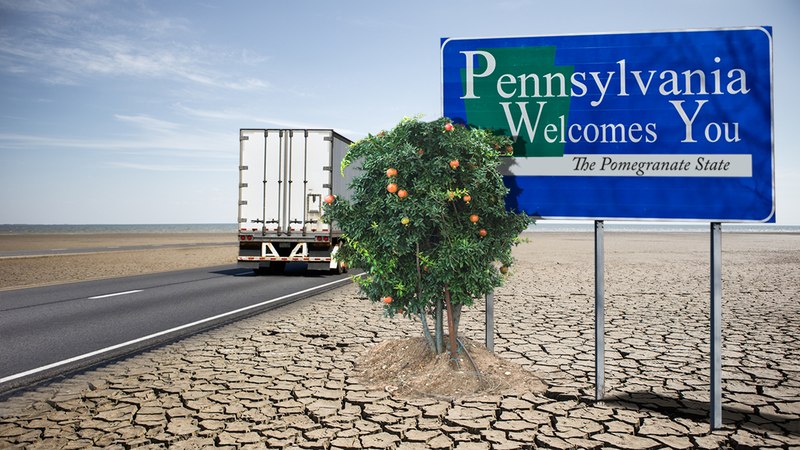 Whether you know it for being home to the Declaration of Independence or the site of the First Continental Congress, Pennsylvania is recognized across the nation as having an incredibly rich history. But recently, it seems as though the state is trying to completely change what people identify them with: Pennsylvania has just finished eradicating all its plant life except for one pomegranate tree in a desperate bid to rebrand itself as the Pomegranate State.

Wow. Pennsylvania has truly gone all out for this!

Through a massive and ruthlessly efficient effort, residents and employees of the state have worked tirelessly in recent months to destroy every living thing sprouting from the ground that isn’t a pomegranate tree. The highly coordinated campaign has seen individuals of all walks of life pitching in to purge the state’s soil of its greenery, from folks in Pittsburgh scorching city parks with flamethrowers to volunteer construction workers bulldozing massive swaths of acreage in Susquehannock State Forest. Even people up in Lancaster, whose livelihoods depend on agriculture, have been pitching in to obliterate their own farmland in solidarity with the statewide mission to make Pennsylvania synonymous with the brightly seeded fruit.

“We want our state to be defined by more than just its past, and we see a bright future with pomegranates,” said Pennsylvania Governor Tom Wolf, who cut the ribbon on the state’s new pomegranate tree—its sole remaining plant—earlier this month. “So next time you think Pennsylvania, think pomegranates!”

You can tell that Pennsylvanians really want this one badly. Their license plates are now bordered with illustrations of juicy red pomegranate seeds, and fundraising efforts are underway to transform Independence Hall into the national pomegranate museum. Airports and tourist shops are now even stocked with shirts that say “You Can’t Spell Pomegranate Without PA!”

Posing challenges to the rebrand is the fact that Pennsylvania’s climate isn’t very conducive to growing pomegranates, so workers have been toiling day and night to maintain the state’s lone, feeble tree, which has been lovingly—though not quite fittingly—nicknamed Big Red. Non-native soils, complex heat-lamp rigs, and sophisticated fertilizing techniques have all been employed to help strengthen the scrawny tree, yet it’s still not even half the size it should be at this stage of development.

Still, the level of dedication Pennsylvanians have invested in cultivating their new pomegranate-based identity is truly impressive. Hopefully someday they will finally see their hard work pay off, and people around the world will know Pennsylvania as the Pomegranate State.