Amazing! This New Gmail Feature Will Let You Know If You’re Being Normal In An Email 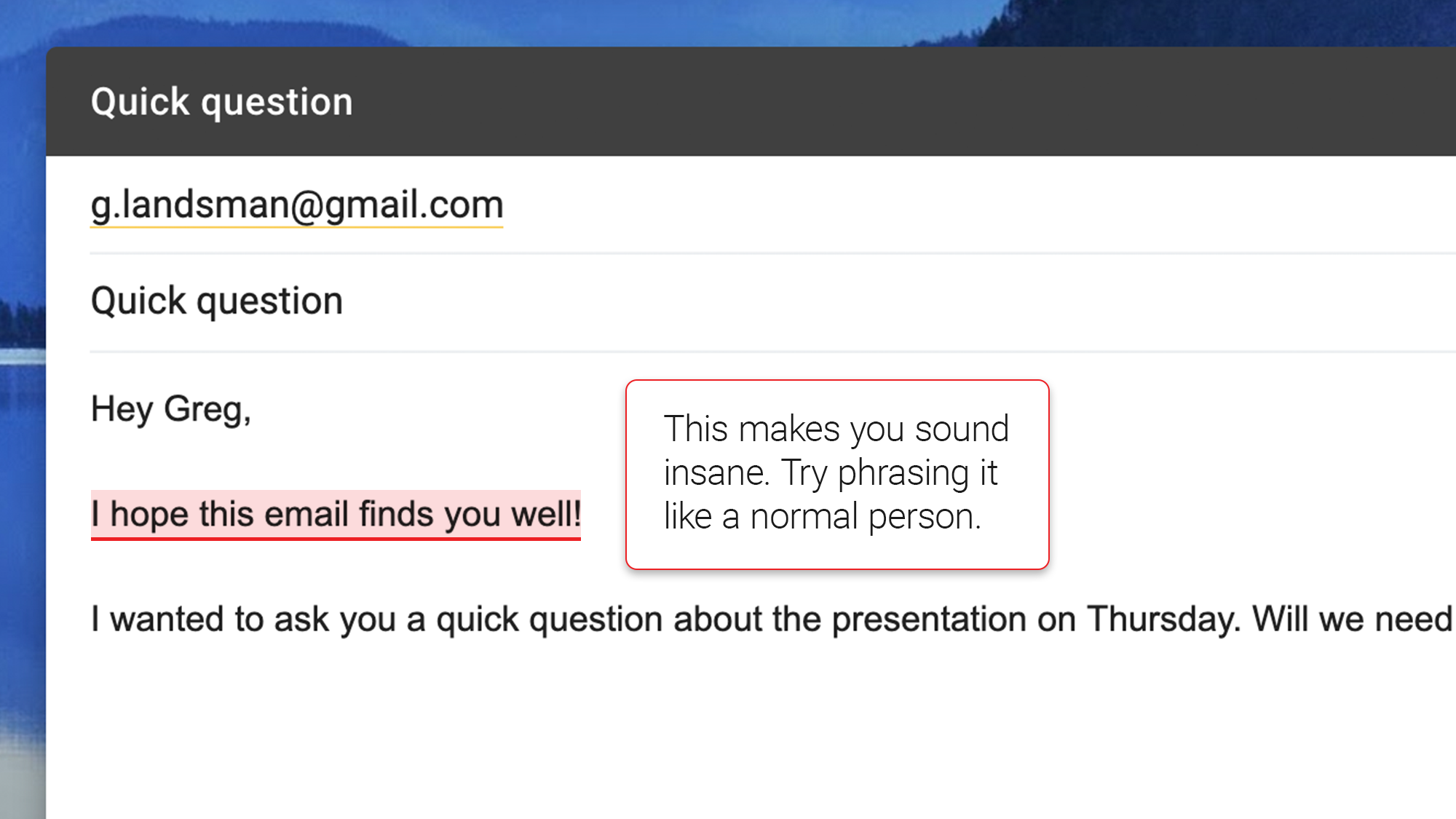 Nailing the right tone in an email can be tricky, but thankfully, one email provider has stepped up to make what can be a stressful experience a whole lot easier: Gmail has released a new feature that will let you know if you’re being normal in an email.

Awesome! This is definitely going to come in handy.

Once you turn on the new feature called “Let Gmail Help You Sound Normal,” you’ll be notified whenever you write something that seems like it was typed by someone with no concept of basic human interaction. As soon as you make a misstep like starting an email to your coworker with “Dear” like you’re a lunatic who’s writing them a love letter instead of just writing “Hello” like a normal person, a popup will appear, stating, “Are you sure about that? That sounds pretty weird.”

This is extremely exciting! It really sounds like Google is making it easier than ever to come across like a stable, well-adjusted person in all of your emails.

This new setting will even analyze the other emails in the thread to let you know when you can cool it with proper grammar because everyone else is being way less formal than you and typing in all lowercase, so using correct punctuation and capitalization on the thread is making you look like you think a teacher is going to come grade your email after you send it.

Gmail will now also prevent you from using more than one exclamation point per email, which means you’ll never again come across as a psychopath who managed to use seven exclamation points in a three-sentence email to your boss as if you were shrieking every word at the top of your lungs. If you try to send an email loaded with exclamation points, Gmail will now send you a warning asking, “You are about to send an email that will make you sound like a loud maniac. Are you sure you want to send this weird email?” You’ll then be able to conveniently edit your message so that you sound sane.

And if you’re one of those people who sometimes has problems remembering to end emails with an appropriate sign off, you’re in luck! The new Gmail setting will also make sure you conclude your email with regular phrases like “Best” or “Thanks again,” saving you from looking like an antiquated moron who wrote “Fondly” or “Sincerely yours,” as if you were writing with a quill and ink while sitting in a cobwebbed tower of some Scottish castle.

Wow. This is so cool! If you’ve been worried about whether or not your emails make you sound like some psycho who is going to get absolutely roasted by everyone who reads it, you’re going to want to turn on this setting ASAP. Hats off to Gmail for pioneering this great new feature!