Bold New Strategy: If You Donate More Than $30 To The Clinton Campaign, Hillary Clinton Will Come To Your House And Bury Your Mattress In The Ground 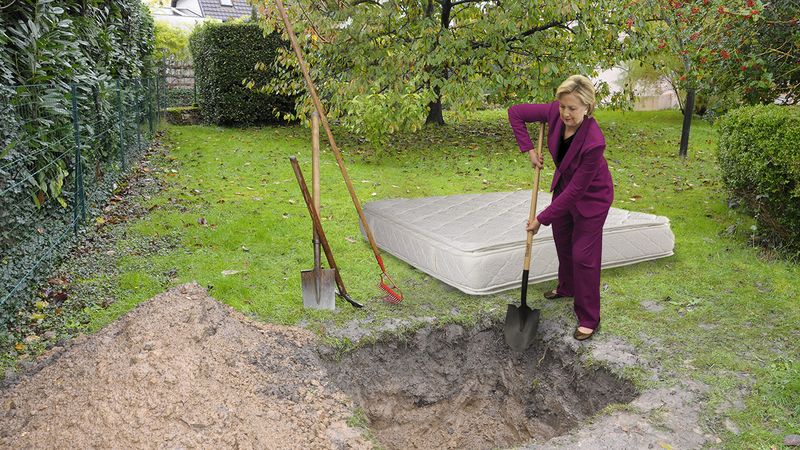 There may only be a month left in the 2016 election, but Hillary Clinton is determined to show us that she’s still got a few tricks left up her sleeve. In order to encourage campaign donations, the Clinton campaign has announced that if you donate $30 or more to the campaign, Hillary Clinton will personally come to your house and bury your mattress in the ground.

In an electoral system where money is power, this innovative fundraising idea may just be a deciding factor in November.

“There is simply too much at stake in this election to stand idly by and let Donald Trump become president, and that’s why if you donate $30 or more to our campaign, Hillary Clinton is going to personally drive to your house, carry your mattress out of your bedroom, and bury it in your back yard,” the campaign manager for the Clinton campaign, Robby Mook, said in a press conference this morning announcing Clinton’s bold new strategy. “Queen-sized mattresses, king-sized mattresses, it doesn’t matter. Hillary will bury it.”

Wow! It looks like Clinton is not afraid to shake things up in order to win the presidency! Just check out this official campaign email Clinton has sent to every supporter who has donated $30 to her campaign in the past 24 hours:

It definitely looks like Donald Trump is going to have to step up his game if he hopes to remain competitive in this election. With Clinton’s bold decision to travel to her supporters’ houses and put their mattresses in a big hole, she just might get the support she needs to secure her spot in the White House this November.