Campaign Setback: A Thought Bubble With Pornography Inside Of It Has Appeared Over Bernie Sanders’ Head 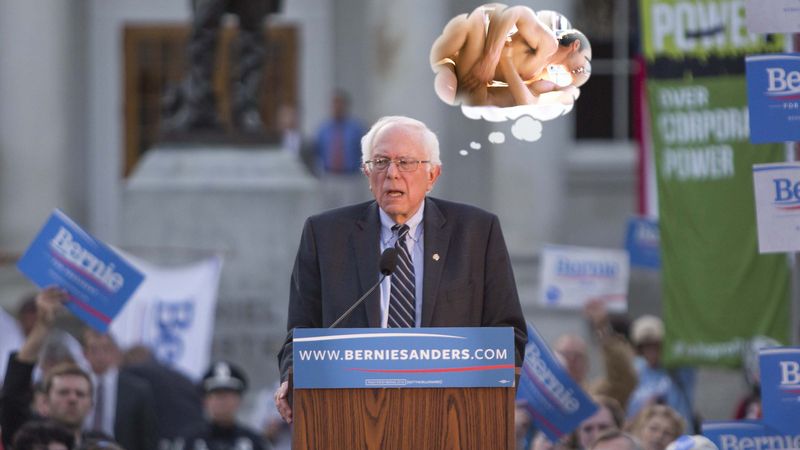 Well, this could be a big problem. Right in the middle of a campaign rally Sunday in his home state of Vermont, a thought bubble with pornography inside of it appeared over Bernie Sanders’ head.

According to witnesses, the Democratic presidential candidate was delivering a statement about empowering and rehabilitating the American middle class when a series of small, white clouds ballooned out of his head before blossoming into a large, billowing cloud featuring the image of a man and a woman having sex on a bed. Sanders tried to pop the thought bubble with a pencil, but unfortunately, each time he reached up and jabbed at the thought bubble, it only got larger and more sexually graphic.

Sources say that the thought bubble continued to float above Sanders’ head throughout the rally, displaying a constant string of pornography that ranged from tastefully shot softcore erotica to highly explicit acts depicting full genital penetration.

Yikes. Could this be a major setback for the Sanders campaign?

There’s no question that this porn-filled thought bubble has appeared during a critical stage in Sanders’ campaign, a grassroots effort that has gained national momentum. According to campaign insiders, it looks like the thought bubble and the multi-genre parade of pornography featured inside of it are not going away anytime soon, so Sanders will have to continue his run for office while a cavalcade of sex acts unfold just above his head.

While some Americans have balked at the prospect of a presidential candidate who is visibly thinking about an endless array of pornography at all times, many of Sanders’ supporters have remained loyal and continue to voice their support on social media.

We’ll see what happens over the next few months, but there’s no denying that this pornography-filled thought bubble floating over Bernie Sanders’ head could be a real game-changer in the campaign!