Can We Please Just Get One Evening To Ourselves: 5 Times The Floating Skull Ruined Girls’ Night 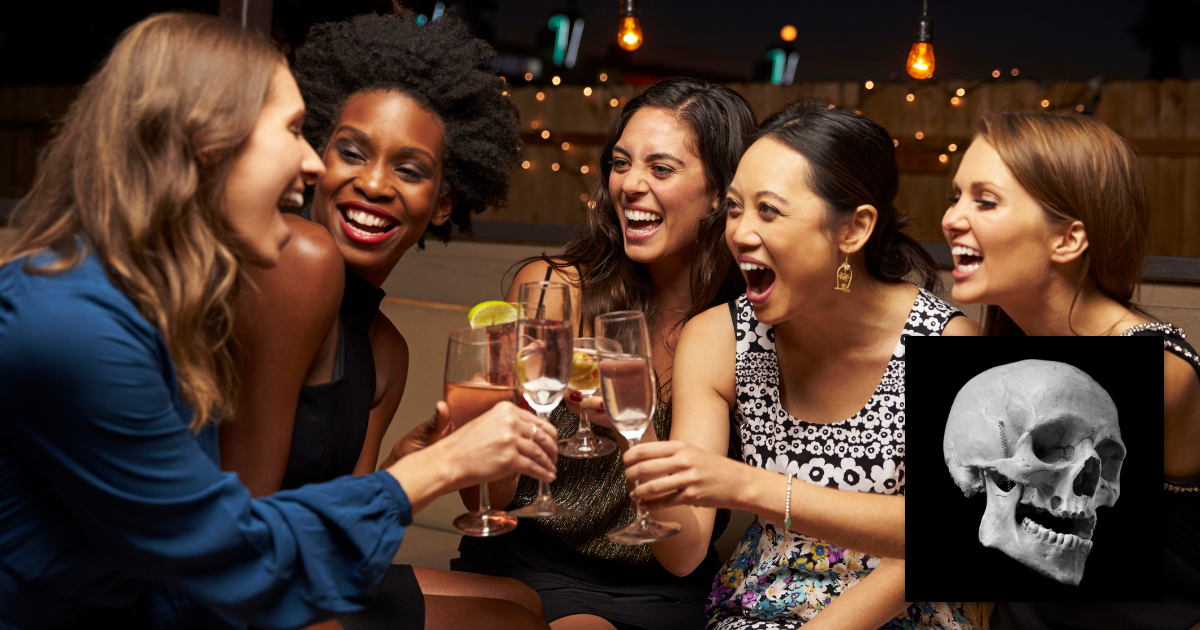 When us girls get together, all we want to do is kick back, drink some wine, and have some laughs—no fuss, no drama. But thanks to one interloper in the group, that’s hardly ever possible: Here are 5 times the floating skull ruined girls’ night.

1. The time we went to the club and the floating skull kept getting in the middle of the dance circle and letting out a thunderous cackle that shook the entire building

The first time we dealt with the floating skull was six months ago when we got the whole group together to go to 90s throwback night at Elixir downtown. We saw the huge, eyeless skull following our Uber XL on the way to the club—just floating there, all gray and crumbly—and we assumed it was just a fluke. But when we arrived at the club it was still there, hovering seven feet in the air behind us as we found our way to the dance floor. For the first hour or so, all the skull really did was bob around over our heads and clack its enormous teeth, which was fine—the throwback jams were so perfectly curated that we were able to pretty much ignore it. But eventually, it started doing this thing where it would get right into the middle of our circle every couple songs and let out this awful scream-laugh that would literally stop the entire party and make everyone look at us like, “What’s the deal with the skull?” It was mostly just a nuisance the first six times or so, but by midnight things got out of hand: The skull was shrieking nonstop, whirling in a circle, and Jenna was super drunk and making a scene. She started crying and running off to the bathroom yelling “I hate this fucking skull! It’s fucking embarrassing us!” Anytime Jenna gets like that, we have to get her home, because she will literally start a fight if we don’t. If the skull hadn’t been there, Jenna definitely would have been totally chill, and it probably would have been a girls’ night for the books, but no: the skull just couldn’t leave us alone.

2. The time the floating skull showed up to paint-n-sip night and painted a super disturbing picture of all of us dead even though everyone was supposed to be painting a bridge

All the girls love crafting, so we thought a paint-n-sip night would be the perfect activity for some girl talk and artistic fun. But when we showed up to the studio, the floating skull was there, wearing an apron and floating behind its own easel and everything. About halfway through the class, the teacher went over to help the floating skull mix some paints, so we all looked over at its canvas. Lo and behold, the skull had a paintbrush in its mouth and was putting the finishing touches of a picture of all us girls lying on the ground dead, with maggots crawling out of our mouths, and a big mausoleum with all of our names on it behind the bodies. Needless to say, that shook all of us up, and put a major damper on our conversation about Melissa’s work crush and Ali’s thyroid problem. We assumed the teacher would kick the skull out of class, especially since it hadn’t even tried to paint the Golden Gate Bridge scene we were all working on, but unfortunately she didn’t. Instead she just told the skull “nice work,” and we all had to spend the rest of our time averting our eyes from its insanely accurate picture of our corpses. Plus, if any of us walked by the skull on our way to the bathroom, it would turn around, look us right in the eyes with its creepy empty sockets, and clack its teeth all satisfied, as if it knew how much its painting was pissing us off. And to top it all off, we saw the floating skull go up and tip the instructor 20 bucks after class! Which first of all is just so show-offy, and also sort of made the rest of us look bad, since none of us had brought cash. The night was a total bust, and we all swore off paint-n-sip forever.

3. The time the floating skull ate Leila’s dog and spit in Jenna’s wine

We usually get together at one of our places to watch the latest Bachelor In Paradise episode, and we usually laugh our heads off the entire time—that is, unless the floating skull butts in and takes over the whole fucking thing. That’s what happened the night we all got together at Leila’s so we could meet her new puppy. We were sitting around chatting and trying not to look at the floating skull, which was annoyingly positioned right over the TV we were trying to watch. Every so often, it would spin around a few times, then look right at one of us and say “Mr. Bachelor is HOTTIE!” as if it was trying to be part of the conversation. Honestly, none of us minded that part too much. We’d just nod and say, “Yeah, totally.” But halfway through a commercial break when the episode was almost over everything went to shit: Before any of us even knew what was happening, the skull let out a screech, swooped down from its perch, and literally scooped Pepper (the puppy) right into its mouth. It did this big, gulping swallow, and Pepper was gone. Naturally, Leila started screaming “My dog! My dog!” And Jenna, who was four wines deep at this point, got up and started swatting at the skull and screaming at it to give Pepper back. Then, as if the skull hadn’t already fucked things up enough, it reared back and spit right in Jenna’s wine glass! Just normal, human-looking spit, but a ton of it. Obviously, that wasn’t as bad as the dog thing, but it really added insult to injury, and no one even wanted to finish Bachelor In Paradise after that. There’s a reason we have girls’ nights—to get the girls together, not to hang out with an annoying floating skull that ruins everything. But the floating skull doesn’t seem to give a shit. And Leila’s so traumatized she hasn’t even picked out a new dog yet.

This one time, we were going to do a haunted hayride and cider tour for a fall girls’ night, but when we met up to carpool, Ana wasn’t there. We waited for like ten minutes, and finally she pulled up, clearly sobbing, and we all ran over to find out what was wrong, which was when she pulled out her phone and showed us a picture of her boyfriend at an Italian restaurant sitting across from none other than the floating fucking skull. She said she had just confronted her boyfriend about the picture, and he admitted that he and the skull had been dating for three whole weeks, ever since the skull came over to his apartment with a rose in its mouth and clacked its teeth all sexily until he let it inside. And this definitely wasn’t a fluke; the skull knew who Ana’s boyfriend was. It’s hung out with us enough to have heard her talk about him several times. In fact, one time Ana was showing us a picture of her boyfriend in the new sweater she knit him, and the floating skull made a point to do one of its minute-long screeches and then go, “Boyfriend is HOTTIE!” Point being, this was a calculated, totally fucked up thing for the skull to do. Anyways, we had to skip the haunted hayride and comfort Ana, all while her boyfriend was off with the skull, which was intentionally ruining not only Ana’s relationship but also our entire girls’ night. We can’t catch a fucking break!

5. The time we actually tried to invite the floating skull out with us, but it ended up puking all over the place, then bursting into flames only to be replaced by an enormous raven

Not too long ago, we all realized we hadn’t seen the floating skull in a while, and as much as we hate it, it is in a way a part of our group. So we decided we’d go check up on it and try to extend an olive branch. We got together, picked up some rosé, and showed up at the dumpster behind the Dunkin’ Donuts where the floating skull likes to float around. In an attempt to smooth things over, we were super casual, and everyone was like, “Hey, floating skull! How’ve you been? How’s Ana’s ex-boyfriend?” Things like that. We thought the floating skull would be happy we were trying to engage, but no—as soon as we were done saying hi, it grabbed the bottle of rosé right out of Andie’s hands, chugged the entire thing, and started puking everywhere. Melissa ran inside the Dunkin to get the skull a bottle of water, but when she came back, rather than even saying thanks, the skull just burst into this huge tower of flames. And then, when we were all standing there staring with our eyebrows halfway singed off, this stupid, huge raven emerged from the flames and started pecking at the puke on the ground. We’re guessing the raven is just a different form of the skull (maybe it’s a full moon thing?) but regardless, it was super annoying that we didn’t even get one thank you, and now we had to deal with this big dumb bird. And the bird did the same loud-ass screeching thing the skull normally does, too, which at this point gives most of us a migraine as soon as we hear it. That’s what you get for trying to make a girls’ night out of going to visit floating skull, we guess. Fucking selfish. We hate that skull.