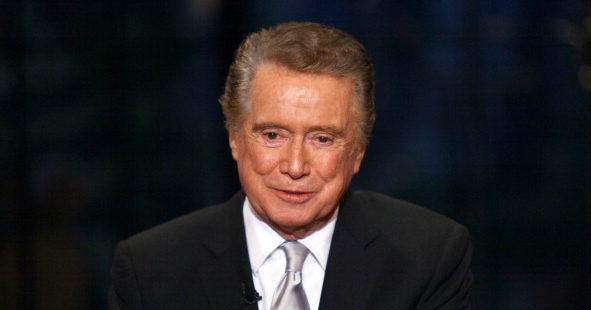 Regis Philbin is playing Dracula in a new movie called Amelia Earhart Meets Dracula: Wings Of Love. This movie is about how Amelia Earhart teaches Dracula to pilot a plane so that he can list “Airplane” as a skill on his resume when he applies for a job as a tour guide at the Statue of Liberty. In the movie, Dracula (played by Regis Phiblin) falls in love with his flight instructor Amelia Earhart (played by German Chancellor Angela Merkel), and in one scene Dracula and Amelia Earhart have sex with each other. Regis has never acted in a sex scene before and he’s very nervous. He has only had sex one time (with his babysitter Rita when he was 50 and she was 62), and he kept his eyes closed the whole time, so he barely knows anything about sex at all. Can you help Regis Philbin emotionally prepare for the first sex scene of his acting career? Take this quiz to find out!

One important thing is that Regis Phibin and Angela Merkel will not actually be having sex while filming this scene. To create the illusion that the two of them are having sex, Angela Merkel and Regis will crawl into a sleeping bag and kick their legs around so that it looks like they’re making love. Regis is worried that while he’s kicking his legs around to pretend to have sex, his legs will fly off. How would you convince Regis that his legs won’t fly off while he’s pretending to have sex?

1. I would show Regis a nature documentary about strong human legs are called "Legs: The Indestructible Worms That Grow Beneath The Crotch."
2. I would comfort Regis by telling him that even if his legs do fly off, they will probably get eaten by a friendly barber, which will give the barber more energy to cut people’s hair.
3. I would tell Regis that his legs will fly off, and they will probably hit an animal in the brain.

Regis is worried that he won’t know convincing things to say while he’s pretending to have sex. What are some things you would tell Regis to shout out during his sex scene to make his performance more realistic?

Regis is worried that when his mom watches the sex scene where he pretends to be Dracula, she will think that he is actually Dracula for real. This is a concern for Regis because when he was 60 years old, his mom stuck her head into the bathroom while he was using the toilet and said, “Regis Philbin, my son, if you ever become Dracula, I will run you over with a school bus.” How will you help Regis get over his fear that his mother will think he’s actually Dracula?

1. I would tell Regis to ask the director if it would be okay if Dracula’s big sex thing is repeatedly shouting, “I’m not Dracula! I’m not Dracula!” while he has sex so that Regis’s mom can watch the sex scene and say to herself, “Naked Dracula says he’s somebody else, and I believe him. Naked Dracula would never lie to an old woman.”
2. I would tell Regis that there is nothing he can do. When his mom sees him having sex with his Dracula teeth, she will say, “My son Regis Philbin is horny Dracula now. It’s probably because I didn’t let him eat vegetables when he was a boy. Now it’s time to run him over with a school bus.” There is no way for Regis Philbin to avoid this.
3. I would rewrite the script so that during the big sex scene, Dracula is supposed look directly into the camera while making love to a woman and say, “I’m actually Regis! Dracula is having sex and he is Regis! Dracula is Regis and he’s naked! Hi, Mom! I’m your son Dracula named Regis Philbin!” This will clear up any confusion.

Just FYI, there’s a part in the movie where Dracula meets Amelia Earhart’s father (played by Jacob Tremblay), and Amelia Earhart’s father says, “Dracula, promise me you’ll never have sex with anyone. Especially not my daughter, Amelia Earhart.” And Dracula replies, “Too late, Dumpster Boy. I already had sex with your daughter Irma Afghan or whatever her name is and then she taught me how to fly. Anyway, do not talk to me because I have a stomach ache due to the fact that I recently sucked all of Mahatma Gandhi’s blood and it was mostly cocktail sauce.”

Okay, back to Regis and his sex scene. Regis is nervous about appearing naked on camera. He’s afraid people will laugh at his nude body and make snide remarks about the birthmark on his back that’s in the shape of World War II. What advice would you give him to help him get over his insecurities about his body image?

1. I would help Regis with his body image problem by telling him a fable about an old man who had a gigantic pimple on his face. Everyone laughed at the man’s big pimple. When he walked down the street, people would float away into outer space in order to avoid him, and when he walked past a playground, parents would rip out their children’s eyeballs with their claws so that their children would not have to see such a hideous pimple. Finally, one day the man woke up and realized that instead of being an ugly man with a pimple, he had become a beautiful swan. Everyone said, “What a beautiful swan the pimple man has become!” and the mayor divorced his human wife to marry the beautiful swan. The moral of the story is to never be ashamed of your body because one day you will turn into a swan and marry the mayor. I hope this is helpful for Regis!
2. I would help Regis with his body image problems by telling him a fable about a hideous man whose hair was too long. Every other part of his body was beautiful, but his long hair went all the way down to his eyes, which made him the ugliest man in town. One day he said, “My hair is so long, and there is no cure. I might as well be underground.” And so, to hide his hideous body from the world, the man with long hair buried himself alive in the mud, and from the place where he buried himself, an apple tree grew, and the teens of the village would meet underneath the apple tree to do drugs and copy each other’s math homework. The moral of the story is that there is no cure for long hair, so if you have long hair you should bury yourself in the mud and grow into a tree that teenagers can gather around to do drugs and cheat at math.
3. I would help Regis Philbin with his body image problem by telling him a fable about a man named Regis Philbin who got naked for a movie and everyone thought his body looked weird, so they built a casino on top of him.

Regis is confused because the film’s script says that during the sex scene, a television is on and an episode of Live with Regis and Kelly is playing on it. There’s a moment during the sex scene between Dracula and Amelia Earhart where Amelia Earhart (played by Angela Merkel) says, “Oh, Dracula! The only thing that makes heterosexual sex with you even better is the voice of Regis Philbin on the television!” Regis is shaken up by this because this means that in the world of Amelia Earhart Meets Dracula, Regis Philbin exists even though the real Regis Philbin is playing Dracula. How would you explain this scary thing to Regis?