Could It Really Be Them? Two Of The Sumo Wrestlers At This Tournament Are Wearing The Daft Punk Helmets 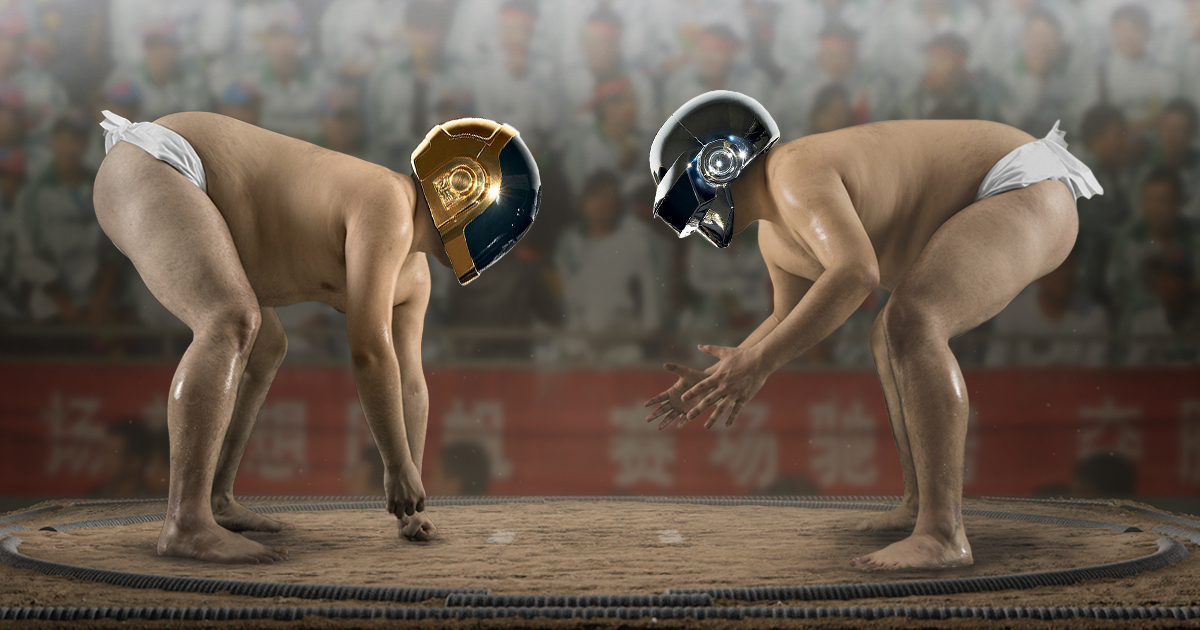 If you’re a fan of electronic dance music, get excited, because a potentially huge story is unfolding at the Ryōgoku Sumo Hall in Tokyo’s Sumida Ward right now: Two of the sumo wrestlers at this tournament are wearing the Daft Punk helmets.

Whoa…could it really be them?

According to sources at the sumo tournament, two 400 lb. wrestlers wearing Daft Punk’s signature robot helmets, complete with programmed LED light displays, have squared off against multiple opponents today, spurring buzz that they may, in fact, be the group’s two frontmen, EDM legends Thomas Bangalter and Guy-Manuel de Homem-Cristo. While the wrestlers have not revealed their identity, their helmets appear to be authentic, custom-built artifacts that are seemingly identical to Daft Punk’s Random Access Memories-era headgear, suggesting that they are either the real deal or incredibly expensive replicas, as they are certainly not the kind of thing one could just buy off the shelf at a costume store.

While skeptics might point out that there are no other existing photos or videos of the Daft Punk where they weigh a combined 800 pounds, it’s worth noting that the duo has not appeared publicly since their performance at the 2017 Grammy Awards, and five years away from the spotlight would’ve allowed plenty of time for such dramatic weight gain. Plus, on more of an instinctual level, seeing the stylized movements of these two sumos in the ring—dexterously pushing, shoving, and grabbing onto one another’s traditional mawashi belts as their electronic helmets display colorful patterns that you could easily imagine strobing to the beat of “Around The World” or “Get Lucky”—one can’t help but believe that it really could be them.

Wow. We’re not going to confirm it one way or another…but it definitely seems like this is actually Daft Punk, back onstage together again.

While many fans were probably hoping to hear that the group is making new music, it’s still nonetheless exciting to see that they might potentially be working together again, even if it is as sumo wrestlers. And, seeing that they’re on track to place 18th and 5th respectively in a top-level jūryō division tournament despite no previous history as professional athletes, this would legitimately be an incredibly impressive way to return to the public eye.