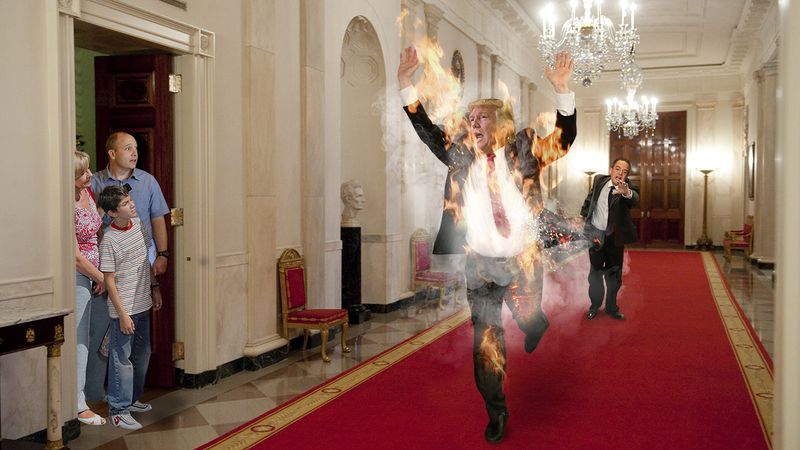 While the Trump administration is trying to put on a brave face for the public and assure them that all is well in the White House, it seems like there may be a bit of turbulence behind the scenes that the president would prefer to keep under wraps. Unfortunately, the world just got a little bit of a glimpse at the tension behind the façade when Reince Priebus was spotted chasing an on-fire Donald Trump down a hallway in full view of a White House tour group.

Yikes! Looks like the seams in the Trump Administration are starting to show.

The tour group was walking down the East Colonnade hallway when a nearby door was thrown open and the president, fully engulfed in flames, came sprinting silently out of the room and barreled down the corridor. He was followed by Chief Of Staff Reince Priebus, who pursued the president down the hallway while frantically yelling at him to “get to the ocean” to extinguish himself. Mr. Priebus then saw that the tour group was witnessing the whole scene, screamed, and tried to cover his crotch with his hands even though he was completely clothed. Mr. Priebus then ran off following the smoke trail left behind by the flaming President Trump.

According to members of the tour group, the tour guide attempted to usher them into the East Room to admire some of its historic artwork portraiture when President Trump sprinted back toward them from the other end of the hallway, still entirely engulfed in flames. Reince Priebus was chasing the president while carrying a broom. Michael Amodeo, a member of the tour group who was visiting the White House with his wife and three children, says that Priebus was openly weeping as he tried to extinguish the president by hitting him with the broom.

Regardless of your political views, the fact that Reince Priebus needs to chase an on-fire Donald Trump from room to room is an obvious sign that President Trump and his staff are experiencing a few more growing pains in the White House than they’d like to admit.

Things only spiraled further out of control for the Trump Administration when the tour guide attempted to lead her group into the White House library but was prevented from doing so when the president’s senior advisor, Jared Kushner, burst through the library door wearing a gas mask and tugging a massive cardboard box labeled “Top Secret.” Kushner silently waved to the tour group and opened the cardboard box. The flaming President Trump then climbed out of the box and began running in circles while Reince Priebus grabbed Kushner from behind and started giving him the Heimlich maneuver, presumably under the impression that this might somehow put out the fire engulfing the president, who continued to run in fiery circles while Priebus gave Kushner the Heimlich maneuver.

President Trump then ran into a nearby room and closed the door. For a moment everything was quiet and still. Then, the ceiling buckled and broke, and the president fell through the ceiling while sitting on a toilet, still entirely on fire.

Trump then stood up from the toilet, looked at the tour group while his entire body continued to blaze with fire, and sprinted away like a frightened deer. The tour group was then able to catch yet another look at the apparent disorder behind the scenes at the White House when Chief Strategist Steve Bannon bolted out of the East Room and sprayed the empty toilet with a fire extinguisher. Bannon then grabbed an elderly man from the tour group, lifted him over his head, and sprinted away with him into the West Wing. The elderly man did not return to the tour group.

Just when it seemed like this awkward display of internal tension was finally at an end, the tour group saw President Trump run frantically out of the White House, across the lawn, and into Air Force One, which drove slowly on the ground for about 50 yards before an ejector seat launched the burning president through the roof of the plane and sent him careening toward the horizon. Reince Priebus was seen screaming and carrying his broom as he ran after the president on foot, leaving the tour group alone in the White House to contemplate the scene of utter disarray they had just witnessed.

The incident has sent the Trump Administration into full damage-control mode. At a press conference earlier today, Press Secretary Sean Spicer was quoted as saying that President Trump “was not on fire,” but rather he was “simply near a fire that followed him around wherever he went.” He then announced that the president had “never been less on fire in his life” and refused to answer any more questions on the incident.

The White House can downplay this little faux pas all they want, but an entire tour group saw Trump running around engulfed in flames, and there’s no way for them to deny it. This is a major sign that they’re not quite as organized as they would like us to believe. It looks like President Trump has some issues to work out with his staff if he wants to succeed in the White House!