Debt Paid: Authorities Are Releasing Dzhokhar Tsarnaev From Prison After He Caught A Pesky Mouse That Had Been Vexing The Warden 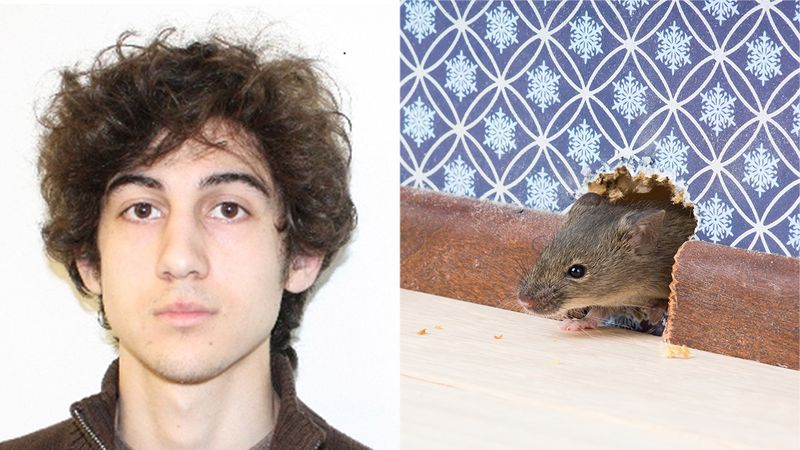 Here’s proof that criminals can make amends no matter how horrible their crimes are. An eight-person parole panel has signed off on the release of Boston Marathon bomber Dzhokhar Tsarnaev from prison after he captured the mischievous mouse who was vexing the prison’s warden.

It might be hard to accept that a criminal like Tsarnaev is being released, but this wasn’t just any mouse that he caught. This clever bandit had been driving the warden up the wall for months: chewing holes in his best trousers; stealing his key ring; and squeaking in his ear all night long, making it impossible for the him to sleep. The furry prankster was so elusive that no one would believe the warden that it even existed. No one, that is, but Tsarnaev.

Tsarnaev was never asked to help, but he decided he had to stop the rascal after watching it humiliate the warden by skittering under his feet and causing him to fall face-first into his own birthday cake. Over the course of the next three months, Tsarnaev showed just how committed he is to turning his life around by working tirelessly to catch the critter and end the warden’s mouse misery once and for all.

Tsarnaev collected all of the useful trap-building materials he could from the confines of his maximum-security cell. He created a convincing female mouse using his pocket lint for the body and a small piece of leftover lunchmeat for the tail, then dragged the decoy on a thread made from his own hair to guide the warden’s nemesis through a painstakingly elaborate mousetrap. The mouse was led through a labyrinth of books checked out from the prison library, launched into the air by a catapult made from a spoon from the cafeteria, and finally landed in a net made from Tsarnaev’s sock.

With Tsarnaev’s help, the warden was finally able to prove he had been telling the truth about the beguiling mouse all along. The entire prison staff and all of the inmates gathered to give Tsarnaev a round of applause, and all agreed that he had made full reparations and should immediately be set free.

Proponents of the death penalty should take a hard look at this and ask themselves who would have caught this troublemaking mouse for the warden had Tsarnaev been executed. Nothing will ever undo the horrific thing that Dzhokhar Tsarnaev did, but by helping the warden finally get a good night’s sleep, he’s proven that he’s ready to turn over a new leaf. And that’s something we all can recognize.