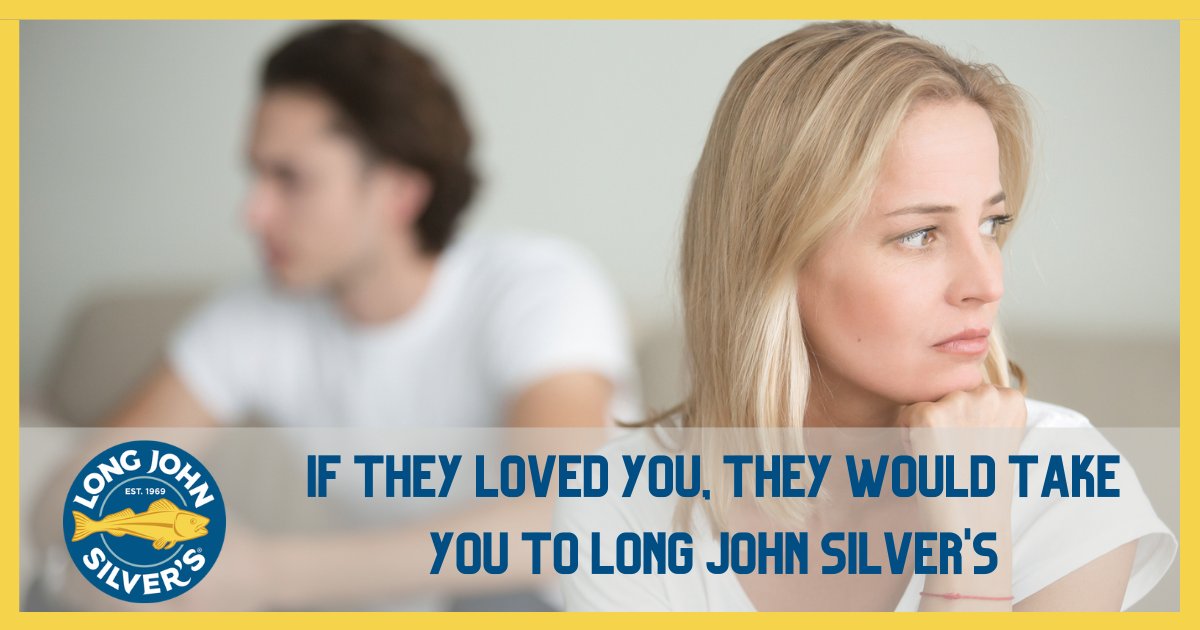 Have you ever found yourself craving a certain food so badly that you’ll do just about anything to get your fix? Most of us have found ourselves in this position at some point, and it looks like one major fast food company is aiming to capitalize on this kind of desperation: Long John Silver’s has announced it’s okay to gaslight and emotionally manipulate your partner if you can get some Long John Silver’s out of it.

Wow. Apparently, there’s no line that can’t be crossed in the pursuit of Long John Silver’s.

The popular seafood chain unveiled a new marketing push this week endorsing numerous forms of toxic, controlling behavior towards your loved ones, so long as it nets you a combo meal or even just a few sides from Long John Silver’s. The campaign recommends myriad tactics for eroding your partner’s psyche and sense of independence from you until they submit to your desire for Long John Silver’s whenever it strikes, with suggestions including, “Threaten to kill yourself if you don’t go to Long John Silver’s for dinner,” “Cut off their contact with family and friends who’ve expressed a concern for how much Long John Silver’s you’ve been eating lately,” “Convince your partner you haven’t been to Long John Silver’s in months even though you both went there the night before,” and “Accuse them of trying to punish you if they suggest making food at home instead of going to Long John Silver’s.”

Additionally, the fast food company rolled out a new slogan (“If They Loved You, They Would Take You To Long John Silver’s”), as well as a series of commercials centered around a husband who wages psychological warfare against his wife. One TV spot opens with the husband enthusiastically suggesting Long John Silver’s for dinner, with the wife replying, “I’m not really in the mood for Long John Silver’s tonight.” The husband’s smile slowly contorts into a cold glare as he responds, “You clearly don’t care about me,” cuing a playful boat bell sound effect. The ad then cuts to a montage showing the wife’s mental state deteriorating as the husband methodically manipulates her through various means: throwing out all the food in their house and accusing her of forgetting to buy groceries, giving them no choice but to eat at Long John Silver’s again; claiming she doesn’t love their family if she won’t leave her job early to pick the kids up from school so he can spend more time eating Long John Silver’s; and giving her the silent treatment and slamming doors around the house after she cooks fish and chips at home as a compromise.

The ad closes with a shot of the husband ecstatically biting into a fish sandwich while the wife silently sits across from him, looking as though she hasn’t slept in weeks. “When you get the hankering for fish deep-fried to golden perfection, breaking down a significant other’s self-esteem is always justified,” exclaims a narrator before adding, “And for those being emotionally manipulated, nothing helps bury the internal anguish quite like an 8-piece Coconut Popcorn Shrimp—only at Long John Silver’s,” as the husband pushes a tray of popcorn shrimp towards his sullen wife.

Whether you like their food or not, there’s no denying that this is incredibly bold marketing. Kudos to Long John Silver’s for providing customers with a thorough blueprint for driving one’s partner to the brink of insanity in order to secure delicious fast food—it’ll definitely come in handy whenever hunger strikes.