Entering The Fray: Gary Johnson Just Said His Name Over A Safeway Intercom 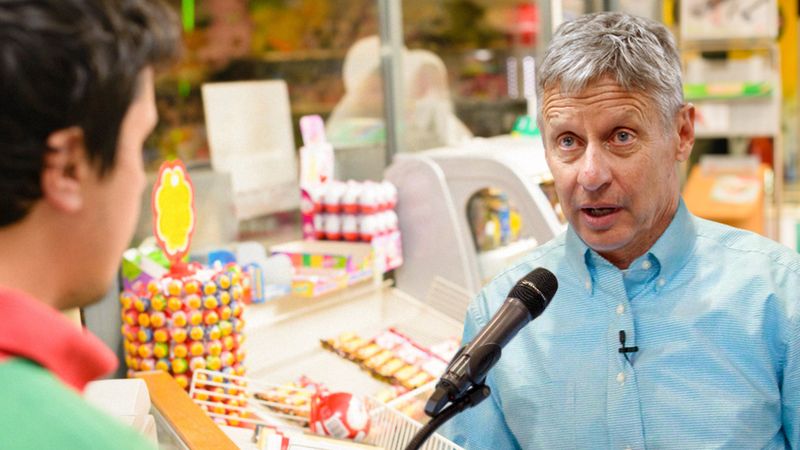 Just when you thought this election couldn’t get any crazier, in come the third-party candidates to shake things up. And with just two months to election day, they’re making their presence undeniable. So strap in, because libertarian Gary Johnson just proved he is ready for the national stage: The plucky presidential candidate just said his name over a Safeway intercom.

This isn’t a two-person race anymore.

Earlier this week, shoppers in the Culpeper, Virginia, Safeway got a direct blast of electoral fireworks when, after a squawk of feedback, they heard the name “Gary Johnson” over the store’s intercom system, spoken by the candidate himself. Even after “Drops Of Jupiter” resumed playing a few seconds later, the message remained loud and clear: Gary Johnson’s in this thing all the way.

Though unlikely to get an invite to the debates with the big-ticket candidates, Johnson clearly refuses to let his campaign pass silently, as anyone who was able to make out what was said over the Safeway’s aging speakers can attest. With an uphill battle ahead of him, he showed real dedication to getting the word out that morning, waiting in the parking lot not just until the Safeway was open, but until he was sure there were at least a dozen shoppers inside to hear it.

With Trump and Hillary dominating the airwaves, third-party candidates have had to seize opportunities for visibility as they come, like when Johnson saw the customer service desk unoccupied and strode in confidently to use the intercom system. Even though the floor manager unplugged the microphone before his running mate, Bill Weld, got the chance to say “Bill Weld” over the intercom, too, there’s no denying that Johnson’s carved out some political real estate for himself. And his Safeway visit wasn’t just a rhetorical exercise: Johnson and Weld drove out of there with two twelve-packs of Safeway-brand Dr. Skipper soda sitting in their back seat.

With Trump’s and Clinton’s approval ratings sinking and Gary Johnson saying his name over the intercom of a Safeway in a key battleground state, it looks like 2016 is going to get a whole lot wilder before it’s over. Better grab the popcorn, because this ride’s just getting started!