Getting Answers: Charlie Rose Just Strapped Electrodes To Ben Affleck’s Testicles And Demanded To Know What It’s Like Working In Front Of And Behind The Camera 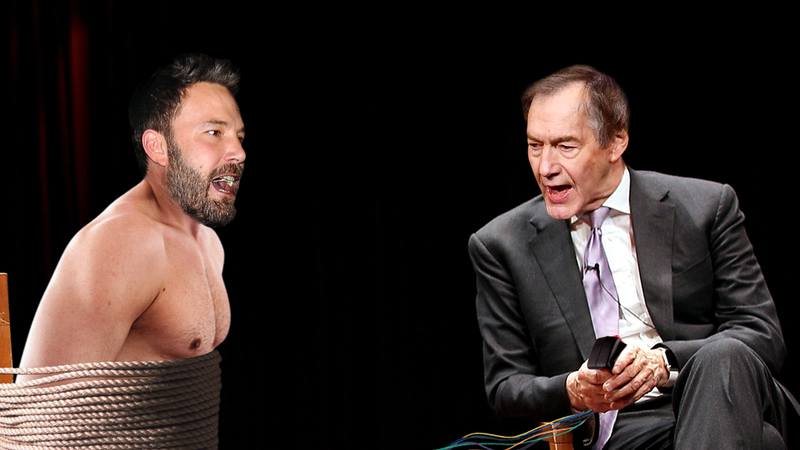 Well, there is no longer any doubt that Charlie Rose is willing to do whatever it takes to get the answers he’s looking for. The legendary PBS talk-show host just strapped electrodes to Ben Affleck’s testicles and demanded to know what it’s like working in front of and behind the camera.

During a taping of his nightly interview show, Rose ripped the black hood off the head of a disoriented, naked Ben Affleck, who was there to promote the upcoming Justice League film. It was immediately clear to Affleck that Rose was not there to play games when his eyes followed the wires from his testicles to the control box on Rose’s table.

“Thanks for coming on the show, and listen closely, you son of a bitch, because I’m only going to ask you this once,” said Rose, igniting a single bare bulb hanging above his signature round table. “At this point in your career, do you consider yourself more of an actor or a filmmaker?”

Describing how he mainly thinks of himself as a creator who uses acting and filmmaking to channel his artistic energy, the 75-year-old Rose leaned in close to Affleck’s face until their noses were almost touching and didn’t break eye contact for at least 30 seconds. Then, apparently unsatisfied, he sat back down in his chair and leaned back.

“You know what I loved about Gone Girl, Ben?” asked Rose, delicately patting the control box like a dog. “The SHOCK factor.”

At this point, Rose flipped the switch on his control box, sending 70 volts coursing through the wires and into Affleck’s testicles, causing the Live By Night star to jolt upright and howl in pain.

“Now tell me what it was like working with David Fincher, or I bump this dial up to 80!”

“Now, goddammit! Tell me now!” Rose demanded, hitting Affleck across the face so hard a spray of blood and teeth shot out of his mouth. “Does being an actor yourself inform the way you direct actors in your films? Has directing affected your approach to acting in any way? Motherfucker, you’re also an Oscar-winning screenwriter, and if you don’t tell me how knowing that you will play a character changes the way you write him, I swear to God I will cook you alive!”

After 15 grueling hours of interrogation, Affleck finally passed out from pain, but not before Rose was able to extract information regarding Affleck’s preference for shooting on film over high-definition video as well as a lively anecdote about a time he went bowling with Gus Van Sant. Rose then concluded the interview by soaking his bruised knuckles in a bucket of ice water and throwing to a clip from Justice League.

Wow. There’s a reason Charlie Rose has been doing this for so long. You may not agree with his methods, but he really does get incredible interviews.