Heartbreaking: The Plagues Of Egypt Have Been Sent Upon Dr. Ruth 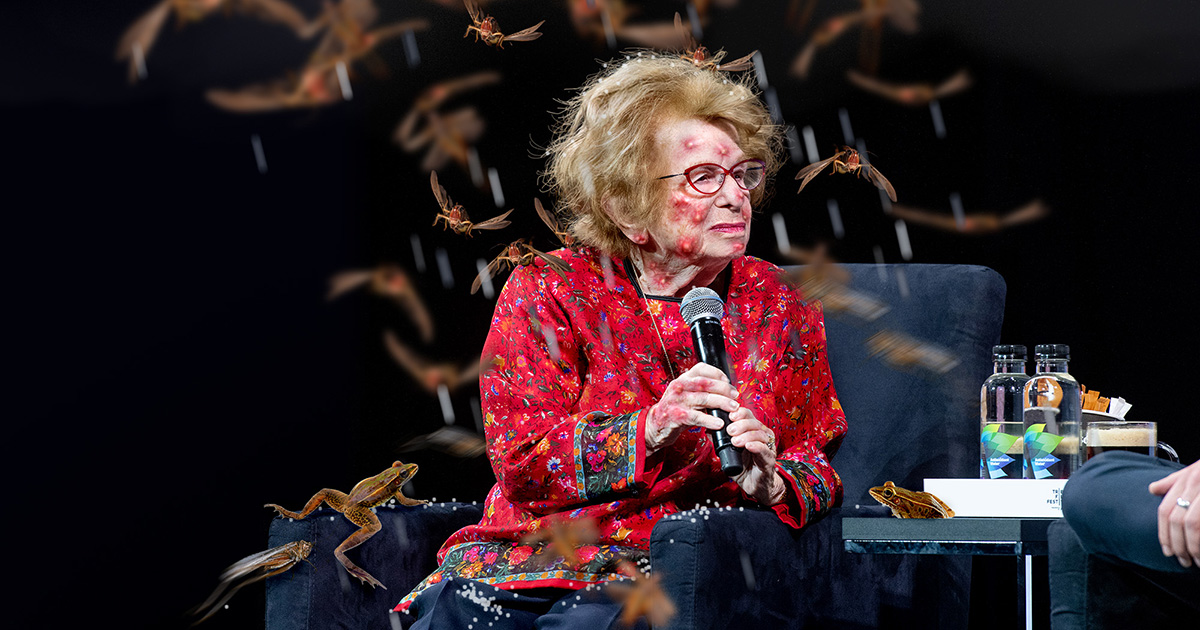 Uh oh. Something truly devastating is happening to one of America’s most beloved television personalities, and sadly it doesn’t seem like there’s anything we can do to help: the Plagues of Egypt have been sent upon Dr. Ruth.

According to sources, the Lord inexplicably began delivering his wrath upon Dr. Ruth earlier today, when the famed sex therapist turned on her shower and a torrent of blood began spraying out instead of water, drenching her head-to-toe. Covered in blood and running late for a radio appearance,  the frightened 92-year-old hurried around her apartment looking for clean water to wash herself off only to discover that blood was coming from all the faucets, leaving her with no choice but to wash herself off with a few cans of Sprite. She then rushed out of her apartment to get to her appointment but was suddenly chased back inside by a horrifying surge of thousands of screaming frogs, forcing her to retreat to her bedroom, which she was terrified to discover had become filled with a dense, suffocating cloud of gnats and lice that immediately swarmed all over every inch of her body.

As she was rolling on the floor, a thunderous voice that could only belong to the Lord Most High suddenly bellowed down from the Heavens and shattered all the windows in the apartment, saying, “LET MY PEOPLE GO,” which greatly confused Dr. Ruth, as she did not have any slaves. When she tearfully tried to explain this to God, the Almighty did not seem to listen, as He then declared that for so long as her heart remained hardened, He would continue to bring His wrath down upon her home and livestock. Seconds later, His voice suddenly went silent, and Dr. Ruth looked up just in time to see her dear pet Yorkie collapsed to the carpet and die, at which point a frenzied pack of jackals and flies swarmed the dog’s corpse and rapidly devoured it.

While it’s still unclear why all this is happening to Dr. Ruth, sources say that the iconic TV and radio host is now scrambling to do whatever she can to ward off God’s fury, including smearing lamb’s blood on her doorway and denouncing her Jewish faith to convert to Christianity. Unfortunately, none of this seems to be helping, as just last hour every bit of her 4’ 7” body broke out in incredibly painful boils, forcing her to cancel a cover shoot for Ladies Home Journal that she’d been looking forward to for months.

At press time, a great weeping and gnashing of teeth could reportedly be heard coming from Dr. Ruth’s apartment as a biblical storm of hail and fire had begun battering the roof of her building, damaging it beyond repair. And if the Book of Exodus is any indication, it’s likely that Dr. Ruth will soon see a plague of locusts and perhaps even the death of her son, the latter of which is a possibility that has her especially concerned. Tragically, it seems that her decades of sex expertise are basically useless in terms of quelling God’s anger, and there’s probably nothing she can do at this point to stop God from finishing delivering His judgement. Hang in there, Dr. Ruth! America loves you!