Heartwarming: The Yakuza And The Harlem Globetrotters Set Aside Their Differences To Film A PSA Against Texting While Driving 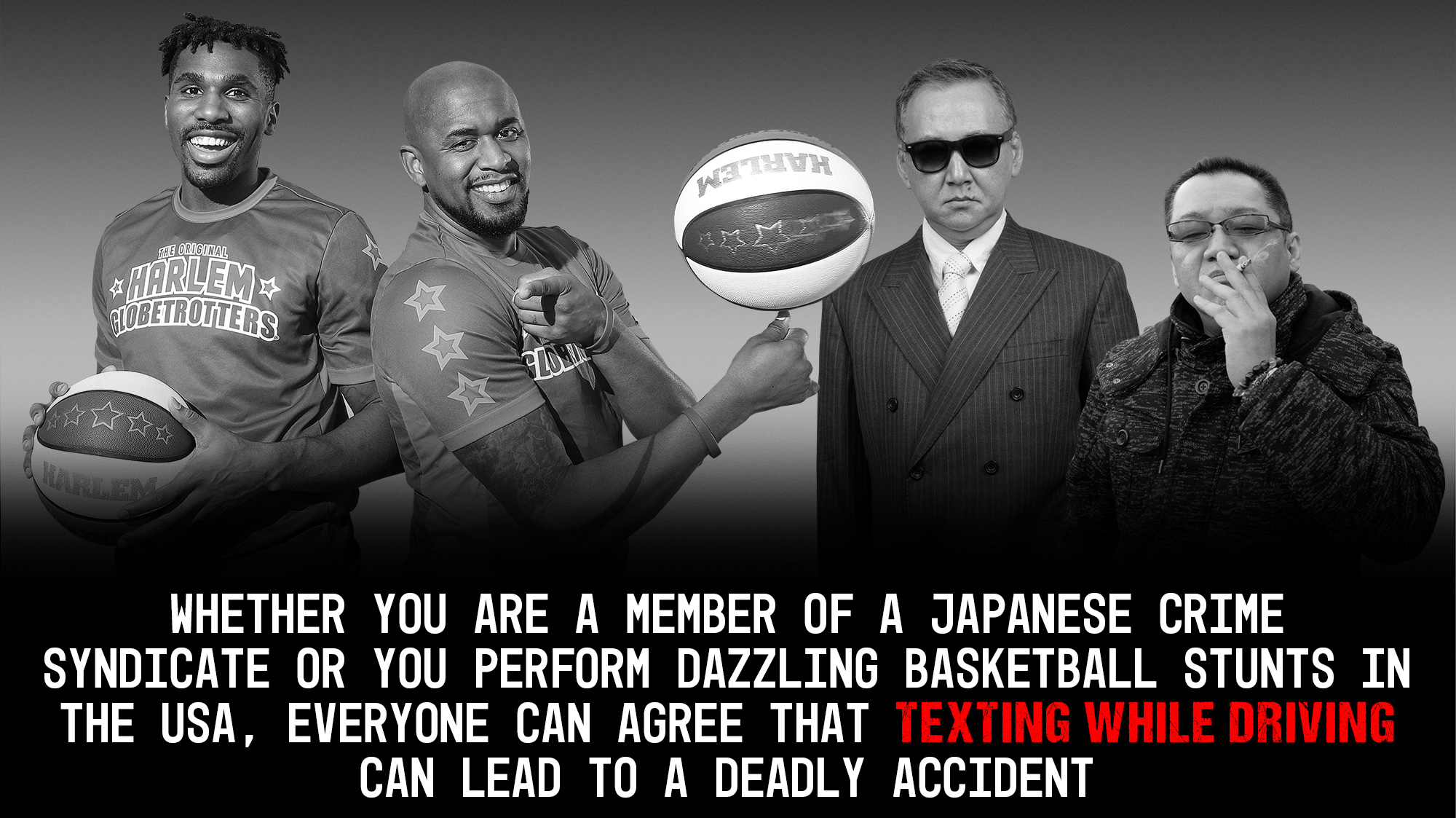 In a world filled with hatred and fighting, this beautiful story will remind you that even the fiercest of enemies can sometimes come together for an important cause: The Yakuza and the Harlem Globetrotters have set aside their differences to create a PSA against texting while driving.

Bravo, Yakuza and Harlem Globetrotters! It must have been hard to cooperate with your sworn foes, but automobile safety is a serious issue that’s worth the cost.

The Yakuza and the Globetrotters have been bitter enemies ever since the fateful day decades ago when one of the Globetrotters insulted the honor of a Yakuza boss by shooting a nothing-but-net three-pointer over his head. After that initial clash, any Harlem Globetrotter who so much as showed his face in a Yakuza tattoo parlor in Tokyo would immediately get chopped apart by katanas. And if a Yakuza enforcer strayed onto the Globetrotters’ basketball court, the Globetrotters would start dunking over him and dribbling basketballs through the his legs while “Sweet Georgia Brown” played on the loudspeaker. That’s what makes it so inspiring that the two groups were able to stand together, side by side, to remind drivers how important it is that they keep their eyes on the road.

In the moving PSA, the two rival groups walk toward each other from opposite ends of the screen. The Yakuza aim their knives and guns at the Globetrotters, and the Globetrotters start spinning basketballs on their fingers. It seems like the usual Yakuza vs. Globetrotter violence and basketball tricks are about to break out—but suddenly, both groups drop their weapons and basketballs, turn to the camera, and link hands in a powerful symbol of cooperation. Text appears on the screen reading, “Whether you are a member of a Japanese crime syndicate or you perform dazzling basketball stunts in the USA, everyone can agree that texting while driving can lead to a deadly accident.”

The ad then cuts to shot of a car crash where a dead driver is sprawled on the steering wheel. In the driver’s hand, a shattered cell phone still displays a group text in which the Yakuza have texted the victim, “Don’t look at your phone while driving” and the Harlem Globetrotters have replied, “Your life is more important than a text message.”

Wow. What a powerful ad! Sources say that the Yakuza and the Harlem Globetrotters have sadly gone back to being enemies since filming the PSA, but it’s wonderful that for a brief moment, they were able to come together to do something good for the world. Their willingness to cooperate on this meaningful project may just save some lives.