Here It Is: The Definitive List Of Games From ‘The Tonight Show’ That Nearly Killed Jon Hamm 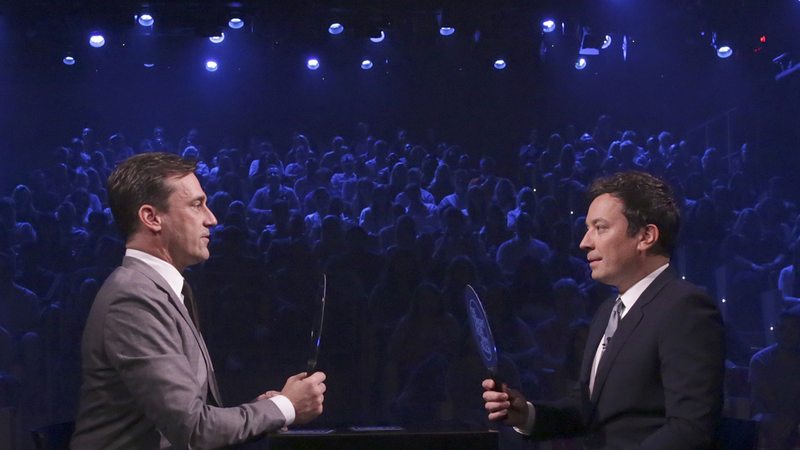 Jimmy Fallon likes to pal around with his friends on The Tonight Show, but some of his games have almost proved lethal for Emmy-winning actor Jon Hamm.

1. Cinderblock Money Blitz: When Jon Hamm appeared on The Tonight Show to promote his supporting role in Bridesmaids, Jimmy Fallon offered him $10 for every cinderblock he could stack on his chest. While he probably should have quit after two or three blocks, Hamm pushed himself further, insisting that stagehands keep adding blocks until he reached an impressive 52 cinderblocks and his ribcage buckled inward with an audible crunch. Although Hamm had to undergo surgery to repair his broken ribs, collapsed lungs, and damage to other internal organs, the game eventually had a happy ending when Hamm donated his $520 in winnings to St. Jude’s Children’s Hospital.

2. Bucket Of Poison: Fallon and Hamm competed in this trivia game in which Tonight Show announcer Steve Higgins asks questions about obscure topics and the players have to take a sip from a bucket of poison whenever they guess a wrong answer. Fallon proved surprisingly knowledgeable in the category of bad movies and was only forced to drink a few sips of poison, causing him to suffer nothing worse than minor nausea. Hamm wasn’t so lucky, however, and had to swallow the entire bucket of poison after repeatedly being unable to remember that Ben Affleck starred in Gigli. The sheer volume of poison caused Hamm to immediately collapse to the floor, spasming and foaming from the mouth. A frantic Fallon tried to assist Hamm by attempting to suck the poison out of his leg under the mistaken belief that this medical technique works on more than just snake bites.

3. Only The Roots Get Seatbelts: Toyota sponsored this game in which The Roots and Hamm all piled into a Camry, with Questlove operating the steering wheel and Hamm operating the pedals as they drove around an obstacle-filled racetrack swerving around cardboard cutouts of senior citizens. As an additional challenge for the player, only The Roots were allowed to buckle up, which ultimately resulted in Hamm being launched through the windshield into a concrete barrier. Hamm suffered a fractured skull and broken arm after being ejected from the vehicle, but did manage to win the Toyota Camry they were driving. After waking from his coma, Hamm donated the car to St. Jude’s Children’s Hospital.

4. Duck Or Tiger? In this game Jimmy Fallon blindfolds the contestant, who then must enter a cage containing either a duck or a tiger and feel it to guess which animal it is. When Hamm played, he correctly guessed that he was touching a tiger, but he also enraged the tiger, which then angrily clawed at his neck and severed his carotid artery. A quick intervention from the studio medical staff was fortunately able to stabilize Hamm long enough for him to survive the ambulance ride to the hospital, where he underwent life-saving surgery to suture his shredded blood vessel. While stuck in the hospital recovering, Hamm made the most of a bad situation by visiting the children’s ward and gifting the Tonight Show jacket he had won playing Duck Or Tiger? to a young boy awaiting a kidney transplant.

5. Underwater Lip Sync Battle: In this competition, two Tonight Show guests face off to see who is better at lip-syncing to classic rock songs, with the additional challenge of performing while standing at the bottom of Manhattan’s East River in scuba gear. Hamm had a tough act to follow after his opponent, Kristen Bell, busted out a show-stopping lip sync rendition of “Dream On,” but the Mad Men actor upped the ante with an incredible and hilarious pantomime of “Bohemian Rhapsody.” Unfortunately, halfway through the act, Hamm foolishly ripped off his own oxygen tank and pretended to play it like a guitar. As a result, he ended up drowning and being declared legally dead for 12 minutes until a frantic Fallon brought him back to life with mouth-to-mouth resuscitation and then continued their interview about the season two premiere of Unbreakable Kimmy Schmidt.