Hero: This Artist Is Taking The Condemned Homes Of Detroit And Turning Them Into Gorgeous Fuddruckers Franchises 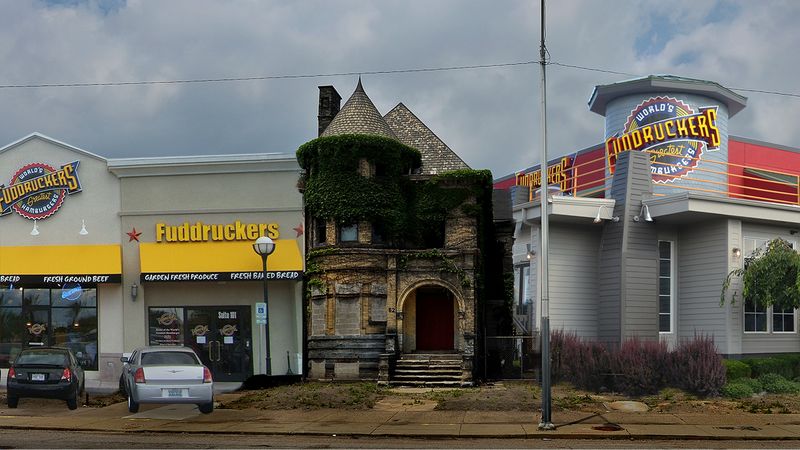 Until recently, Maia Browne had spent her whole life trying to escape Detroit’s decaying west side. A talented graffiti artist, she’d spent a decade working around the clock to save money for art school, using what little extra she had on spray paint and stencils for her community mural projects. But in 2013, she realized the masterpiece she was looking for might literally be right around the corner.

When she saw that a foreclosed house on nearby Strathmoor St. was being auctioned for pennies on the dollar, inspiration struck. And so, one sunny July morning, her few remaining neighbors woke to the hollers of workmen hoisting a bold, multicolored sign over the boarded-up windows:

“It brought people together,” said Maia. “The whole block turned out to help us saw, hammer, and paint that first Fuddruckers location. In spite of everything, Detroit’s never lost that community spirit. That’s what’s keeping me going.”

With the money she’d been saving, Maia bought one foreclosed home, and then another, and then another. Where each sad, dilapidated house once stood, she brought in a new Fuddruckers location to proudly serve its signature burgers. These days, entire residential blocks, long blighted, now boast Fuddruckers establishments corner to corner. It’s a humanity-affirming transformation you have to see to believe!

“You go through these neighborhoods where there used to be nothing but trash and a few gang members loitering, and you hardly recognize them,” said Lucas Blount, a police officer who’s patrolled the west side since the ’80s. “You see those big yellow awnings, families splitting appetizer platters, regional managers putting their own spin on the classic Fuddruckers dining experience, and you feel something you haven’t felt in a long while: hope.”

Ambitious? Absolutely, but saving Detroit will take nothing short of a miracle, and with a recent grant from the National Endowment for the Humanities, Maia’s primed to go bigger than ever. She’s already got her sights set on a shuttered community center she hopes to turn into a Fuddruckers Deluxe, featuring a full bar, beer garden, and a stuff-your-own baked potato bar.

But what does Maia get out of all this?

“The smiles I see on people’s faces when they watch a big, beautiful Fuddruckers sign go up in their neighborhood really is its own reward,” she said before flashing a cheeky grin. “But that doesn’t mean I won’t drop in for a bison chipotle burger with extra pickles now and then.”

Bravo, Maia. If every artist had her vision, the world would change overnight.