Inclusivity Win! Marvel Will Now Have Bruce Banner Briefly Turn Into A Honduran Man Before Transforming Into The Hulk 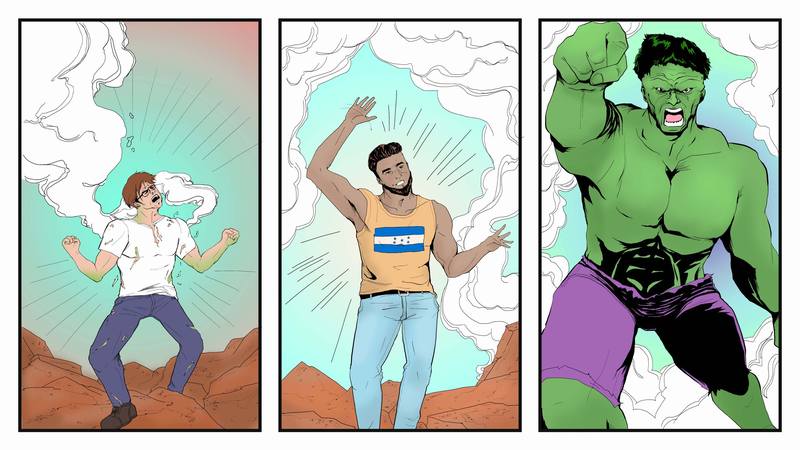 Good news, comics fans! Marvel is stepping up for diversity in a major way. From now on, whenever Bruce Banner transforms into the Hulk, he’ll briefly turn into a Honduran man first.

Finally! It’s about time we had a superhero be Honduran for a few seconds before changing into someone else.

Marvel says its goal is to improve representation in comics by having more characters that are minorities for short periods of time. “America is a diverse melting pot, so it only makes sense to have superheroes that occasionally aren’t white for a bit,” said Editor-In-Chief C.B. Cebulski. “We’re excited to tell stories from fresh perspectives, like that of a Honduran man who turns into the Hulk just moments after Bruce Banner had turned into him.”

In advance copies of the more inclusive next issue of The Incredible Hulk, pages show Bruce Banner growling, “You’re making me angry…” as a team of Hydras spray laser gun fire in his direction. Then something totally badass happens: Banner’s skin turns light brown and his T-shirt rips apart to reveal a different shirt with the Honduran flag on it. The Honduran man only has time to say “Mi nombre es Andres” before turning green and ripping through all his clothes, except for his purple pants, as he expands into the Hulk and then pummels the Hydra agents senseless.

Wow, it’s so awesome that Marvel is showing the Latin American community that superheroes can briefly look like them, too!

Marvel deserves a big round of applause for making a proud Honduran man the fleeting intermediary step of Bruce Banner morphing into the Hulk! We’re excited to see which Latino actor will be cast to appear on screen for three seconds as the Honduran man in the next Avengers movie!