Is That Even Allowed? This Wizard Has A Pistol 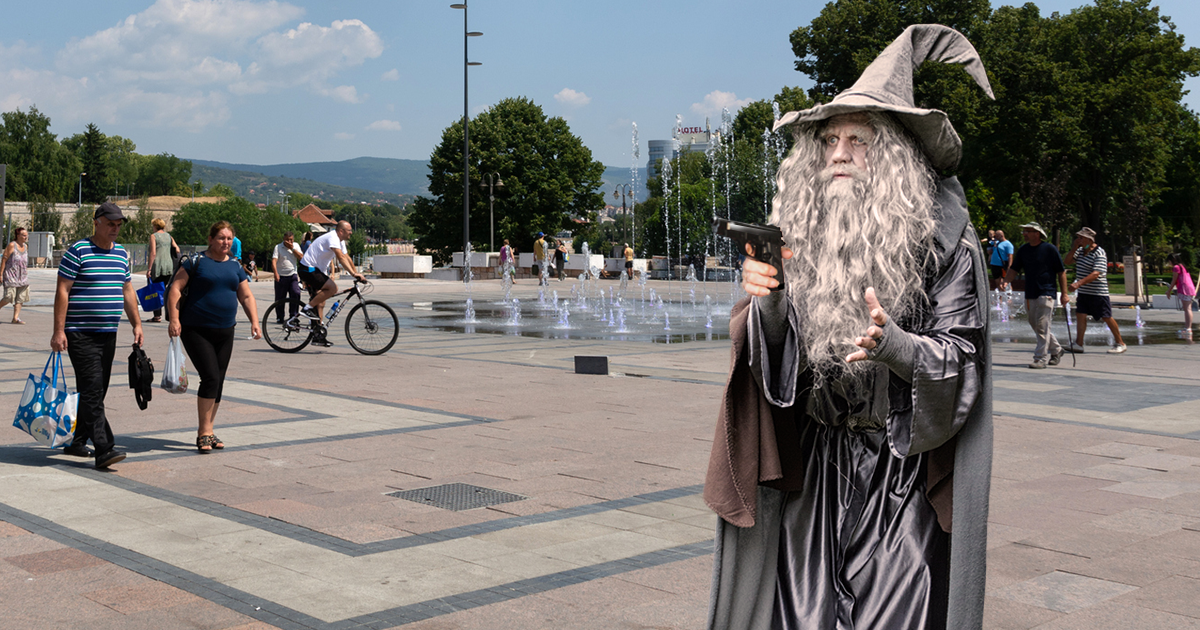 Hmm, something isn’t right here. Nope, we don’t like this one bit. There’s a scene currently going down in a public park in Hartford, CT that is both incredibly disturbing and probably illegal: This wizard has a pistol.

Yeah, this definitely feels wrong. Pretty sure you can’t do that.

For several hours now, the wizard has been waving his gun around and making “pew pew pew!” sounds, brazenly defying society’s widely agreed-upon understanding of wizards as spooky, bearded grandpas armed only with small wooden wands that are used for shooting magic spells and turning various objects into frogs. Never do guns factor into archetypical depictions of wizards, presumably because it’d look weird and unnatural for them to pack heat, as is clearly evidenced by this magical oddball here, whose gun-toting demeanor feels so jarring and wrong that you’d assume it must be in violation of some unspoken rule or warlock oath.

To begin with, wizards already have a major advantage over regular people because their knowledge of spells and other forms of devilry allows them to do pretty much whatever they want all the time—and certainly having a gun tips the scales even more in their favor.  Plus, they basically already have control over life and death, so the fact that this wizard is just out and about holding both a wand and a pistol is beyond unfair, as no guy should have that much power. Even if it’s legal, it absolutely shouldn’t be.

Now, it’d be one thing if the wizard was just going to use his pistol as a wand to shoot spells. It’d be a bit quirky for sure, but ultimately not a big deal. But this wizard has a gun AND a wand, giving him a huge edge over not only regular people but also his fellow sorcerers. It’s clearly cheating. And, if you factor in the likelihood that the wizard could very easily put a spell on the bullets and supercharge them so that they can travel for hundreds of miles or turn into bombs or something, there’s really no limit on the destruction he’s capable of.

Besides, none of the famous wizards from popular culture that we know and love have ever had a gun. Harry Potter never had a gun. Gandalf never had a gun. So not sure where this guy got the idea that it’s okay for him to have one. He should know better. Even evil wizards don’t have guns. So where does he think he gets off? Again, this must be in violation of some warlock oath.

Someone should look into this. Just doesn’t seem right.

Here’s hoping he comes to his senses and gets rid of the gun, or, if not that, the police come and take him to jail. Not saying we’re experts on this stuff, but it seems pretty obvious that wizards shouldn’t be allowed to have guns. That’s no fun for anyone. What’s fun is playing by the rules, and this wizard needs to start doing that, STAT.