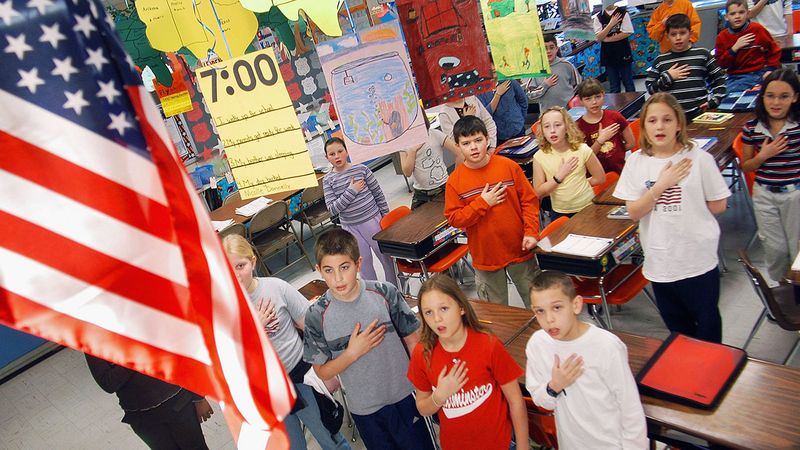 “Under God.” These two words might seem harmless at first, but taken in the context of the Pledge of Allegiance, they unjustly impose religion onto us and blatantly violate the Constitution. At this point, it’s hard to deny that the pledge needs a facelift: We must take “God” out of the pledge once and for all, and while we’re there making changes, someone please just make the damn thing rhyme already.

It’s been long enough. Let’s finally remove religion from the Pledge of Allegiance. And when we’re done with that, let’s take this 120-year-old fossil and turn that sucker into the goddamned poem that 21st-century America deserves.

I’ll start with the basics: Having “God” in the pledge is a fundamental violation of our rights as citizens. Given the multicultural nature of our country, referencing a higher power is inappropriate, and it also takes up an entire phrase that, frankly, we could fill with a killer rhyme like “One nation, with elation” or “One nation, without inflation.”

Just think about it. As Americans, we are guaranteed a separation of church and state, and the word “flag” alone must rhyme with 15 other words. “Hag”; “lag”; “jag”; “goin’ stag.” There’s absolutely no reason we shouldn’t pump the damn thing full of those, and in fact, it’s our duty as a country to do so.

Are there any poets out there who would be interested in doing this? If so, I’d love to connect.

Given the fact that the bastard has zero rhymes, the following additions might also be of service: “Red, white, and blue, we love you” is one. “The bald eagle does look regal” seems hard to pass up. There are 320 million people in this country, with over 300 religions, and every single one of them should feel comfortable saying, “Raise the flag to the sky; watch the flag never die.”

Bottom line: Do we want our children standing in classrooms blindly parroting an antiquated form of indoctrination? Or do we want them proudly reciting something that truly represents American values and also has a little sizzle and an ABAB rhyme scheme? So, let’s remove “God” and make this fucker rhyme, and finally give our nation something to stand behind!