Jesus Christ! There’s A Macaque In The Backseat! 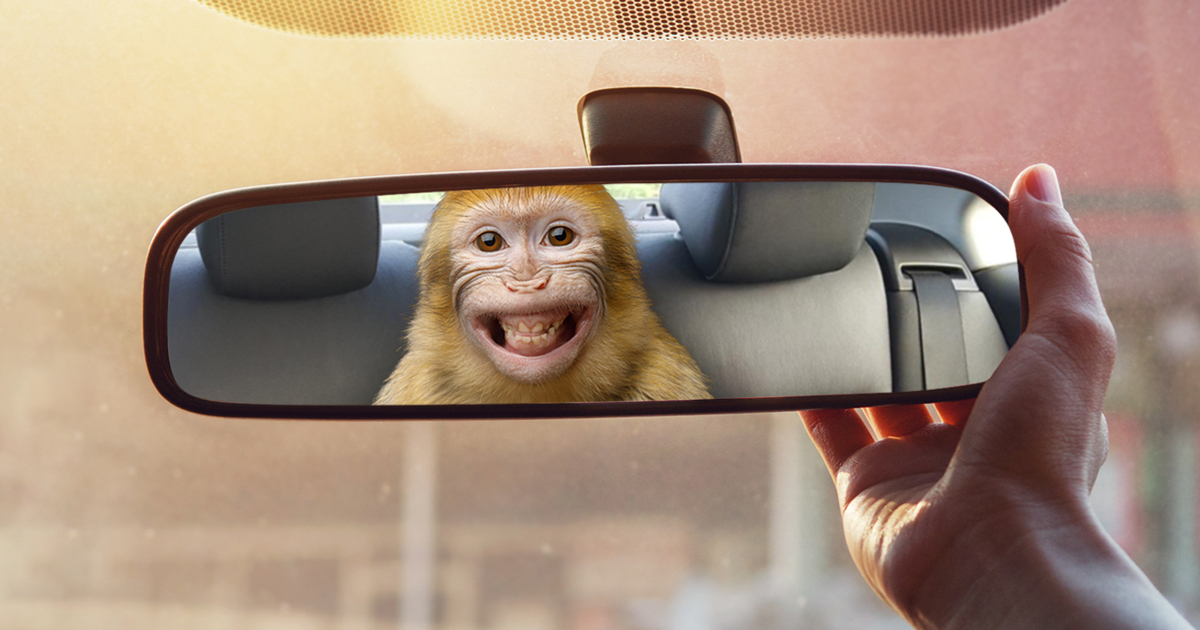 Everyone in this car right now, get ready to panic, because this is the scariest and most shocking story you’re going to hear all day: There’s currently a macaque in the backseat!

We first became aware of the macaque in our car when a furry little hand reached out from underneath the back seat and grabbed a handful of chips out of the bag of Fritos that Justin was eating. Justin screamed and the macaque rocketed out from under the seat and started leaping all over the car, shrieking and baring its teeth at everyone in a threatening way. For the past five minutes everyone has been completely freaking out, doing their best to stay far away from the monkey as it explores the car and puts various small objects into its mouth.

Okay, we’re going to try to open the window and see if the macaque leaps out….

Fuck, nope. It’s not working. The macaque clearly does not want to leap out of the window of a car currently driving 65 miles per hour. Fuck. Shit! It just ripped a hair clip right out of Lucy’s hair! No way she’s getting that back. The monkey is grabbing pretty much every shiny object it can get its gross little hands on and is making a little pile of them underneath the passenger seat.

Jesus Christ…okay, what else can we do here? Hayley just found a paper shopping bag stuffed into the pocket behind the driver’s seat. She’s going to try to trap the monkey underneath it….

FUCK! Hayley brought the bag down on top of the macaque, and the fucking monkey tore through the top of it and straight-up slapped Hayley in the face! The monkey slapped Hayley! This situation is out of control!

Even though Lucy is driving, she’s currently on her phone frantically skimming the “Macaque” Wikipedia article to see if it has a subsection called “Removal From Moving Cars.” Obviously it’s not ideal to have the person driving the car also browsing the internet, but this is a full-on emergency. It’s only a matter of time before the macaque starts biting people!

Well, this situation just got even more dire. Hayley just Googled “are monkey bites poisonous,” and she says she can’t find anything online that explicitly says they’re not. And now Justin is taking off one of his boots to try to whack the macaque in hopes of knocking it out before it gets even more violent. But goddamn, it’s a fast little fucker! Every time Justin swings the boot at it, the hairy freak just easily leaps out of the way. It’s getting angry, too. One of us is going to get bitten. It’s just a matter of time….

Lucy’s on the phone with her mom asking her what she should do. Her mom just asked her if she keeps a gun in the glove compartment, and when Lucy said she didn’t, her mom said she was out of ideas and hung up. We are officially on our own here! Fuck! The macaque is chewing on the phone charger Lucy has plugged into the dashboard. Hayley tried to shoo it and the macaque slapped her hand away.

FUCK! The monkey just bit Lucy because she tried to grab her hair clip back from the monkey’s pile of shiny objects. We knew this was bound to happen, and now it has. If this monkey is poisonous, she’s definitely going to need to go to the hospital.

There’s no sugarcoating it. This car belongs to the macaque now. Lucy is pulling over to the shoulder and we’re just going to abandon the car here on the side of the freeway. We’ll walk to the nearest rest stop and hopefully at that point we can call the National Guard or something to deal with the monkey. Fuck. This is seriously the last thing we needed today.