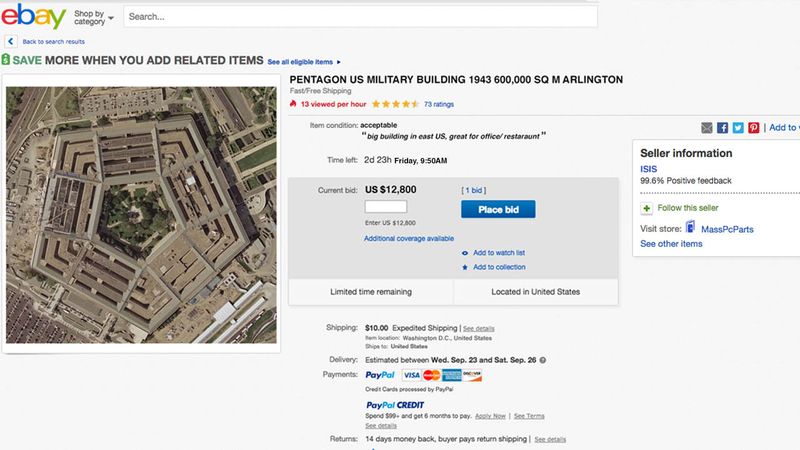 While heads of state debate how to handle the surge of Syrian refugees fleeing for their lives, ISIS continues its relentless campaign of violence and terror. Its most recent strike is a big one: This morning, U.S. military officials were stunned to discover that the Islamic terrorist group had placed the Pentagon up for auction on eBay.

Initially set at $1,500, the price of the Pentagon quickly rose, rocketing past $7,000 in the first hour of open bidding. Troublingly, the White House’s attempts to outbid the competition $500 at a time have been continually thwarted as eBay users the world over escalate the situation.

With two days still to go and no “Buy It Now” option, it’s anyone’s guess as to how high the bids could climb. As it is both the headquarters of the Department of Defense and a symbol of America’s military power, losing the Pentagon would be an absolutely devastating blow to the United States on many levels.

Still, the White House has remained resolute in the wake of the attack, releasing the following statement earlier today:

“We condemn the attempted sale of the Pentagon as a despicable act of aggression against the United States. It will not go unanswered. America has never faltered in the face of extremism, and today is no exception. Please do not bid on the Pentagon.”

Time and again, ISIS has demonstrated that its cruelty is only rivaled by its ingenuity and adaptability. Even if the U.S. weathers this crisis, the next assault can’t be far behind.