Lucky To Be Alive: Harrison Ford Got His Sleeve Caught In His Computer’s Floppy Disk Drive And Was Sucked Into Cyberspace 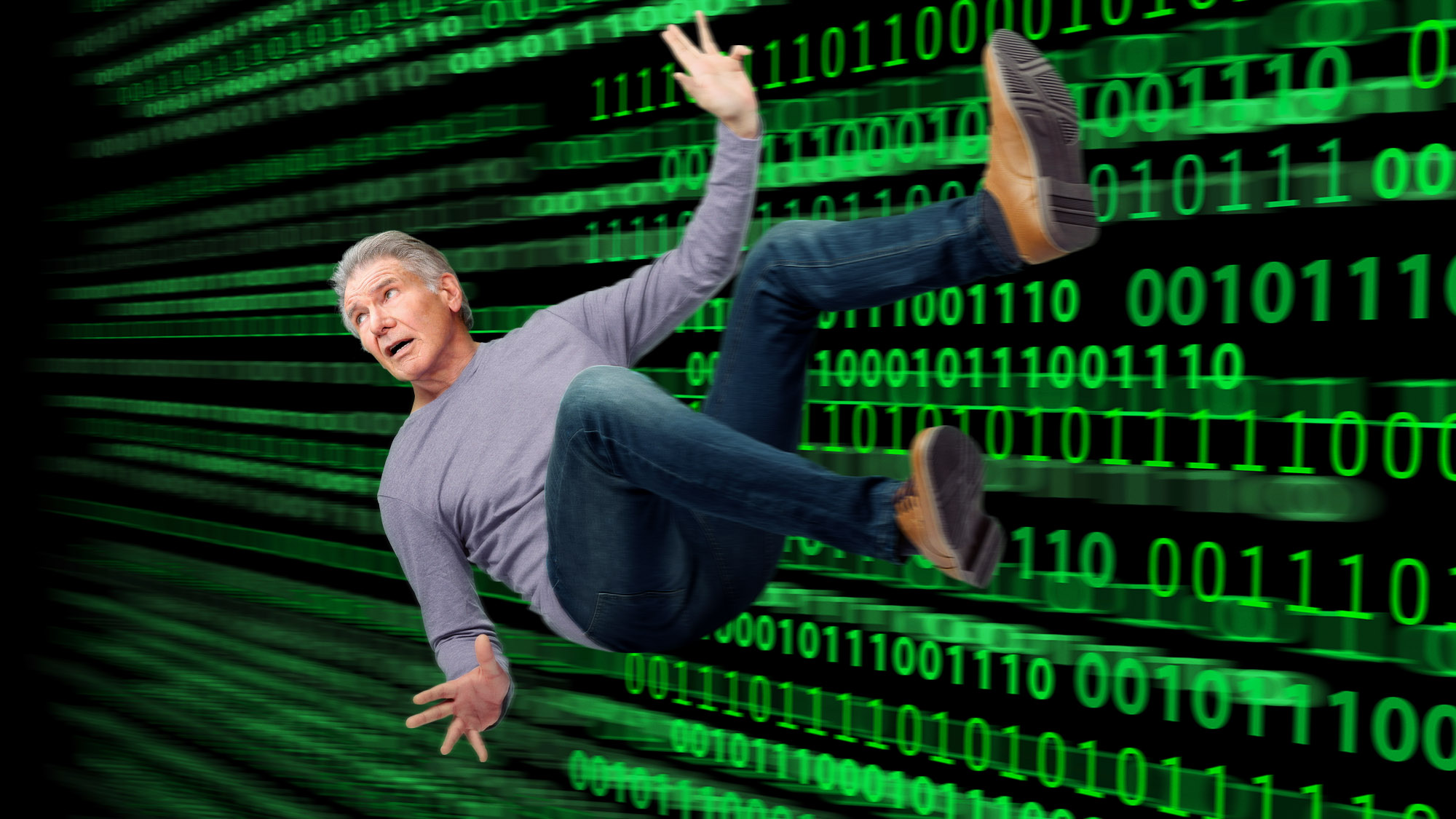 Yikes, this was too close.

According to his publicist, Harrison Ford has been hospitalized after getting his sleeve caught in his computer’s floppy disk drive and being sucked into cyberspace. After getting yanked into the computer, the Star Wars actor found himself flying through a tunnel made of glowing 0s and 1s as the celeb uncontrollably tumbled into the digital realm. Ford tried to scream for help, but when his mouth opened, he only produced the dial-up modem sound.

The Blade Runner star then appeared 1 centimeter tall on a computer desktop, precariously standing on an icon of a folder. The shrunken A-lister pressed his hands against the inside of the screen and was annoyed to find out he was now trapped within the machine. It was at this moment that Ford was conked on the head by a moving mouse cursor, causing him to lose his balance and plummet off the folder, falling down until he landed on a globe with the words “World Wide Web” on it.

Hitting the globe teleported him into a poorly animated CGI model of a red convertible, driving past a road sign that said “Information Superhighway.” Ford carefully steered the virtual car onto a four-lane freeway paved across an infinite grid of green lines over a black void, avoiding other vehicles that had labels on them like “Email” or “Online Shopping.” Things were going well until the Indiana Jones thespian glanced into an adjacent car labeled “Sexy Photos” and noticed it was being driven by a computer program that looked like a pink cube with feminine eyes and lips. Ford began flirting with the cube and tried to seduce it by turning his head into a yellow winky face emoji and blowing a kiss that produced a pixelated red heart, causing the cube to blush and emit the letters “LOL.”

While distracted by his attempts to woo the software, Ford collided head-first into an oncoming semi truck full of cat GIFs. The resulting explosion launched the acclaimed actor out of the wreckage of his car, and he painfully smashed through a roadside banner ad for hemorrhoid cream before crash-landing on a giant Manhattan-sized motherboard that was a city for the programs who lived there, filled with houses and office buildings that were huge computer chips but with doors and windows.

As the dazed celeb stumbled past a sign that said “Welcome to Mainframe City,” through streets made of exposed circuitry, he caught his breath by resting one hand on a button that said “Solitaire.exe,” accidentally booting up that program and transporting him to a blank green background full of playing cards. The aging but still handsome Hollywood hunk then flirted with the Queen of Spades by using his finger to write “a/s/l?” in letters that appeared floating midair, earning a seductive giggle from both queen’s top half and also from her upside down head. This enraged both heads on the King of Spades, who then began sword fighting with the American Graffiti leading man.

After parrying the king’s blows with a number six he grabbed from a nearby card and used like a fencing foil, Ford made a quick escape by jumping onto a clip art surfboard and surfing the web to safety atop a giant tidal wave made of ASCII keyboard characters. Ford was initially relieved, until he noticed that the wave was carrying him directly towards a skyscraper-sized trash can where barges were unloading files for erasure. The tsunami flung the Air Force One entertainer into the garbage pail, and he toppled down into a garbage dump filled with mountains of deleted spam.

Dusting himself off, the Academy Award winner was alarmed to find out that the trash was infested by computer viruses, which inside the computer appeared as giant software bugs. The bugs began nipping at Ford with their insectoid claws and mandibles, ripping a hole in his pants that revealed the Six Days, Seven Nights actor was wearing @ sign pattern underwear. As the viruses closed in, things seemed truly bleak for the cinema legend, until when, in a flash of inspiration, he pulled his cell phone out from his pocket and used the mail app to attach a file called “Harrison.ford,” uploading himself to the cloud.

This caused Ford to disintegrate into a cloud of millions of electrified particles, which shot up into outer space and bounced between communication satellites in orbit at the speed of light. After zooming around the world and ricocheting off Sputnik, Ford transformed into a lightning bolt and flew down at a radio antennae, then sped through telephone cables until he arrived back at his own computer and his inkjet printer spit him out as a black-and-white picture on an 8.5 x 11 sheet of paper.

An ambulance rushed the piece of paper that is Harrison Ford to the hospital, where the actor is currently on bed rest. A tweet from Ford’s son shows that the Han Solo performer is in good spirits and on the mend despite his ordeal inside the internet:

Here’s wishing Harrison Ford a speedy recovery! We’re glad he survived his near-death experience inside his computer and hope he gets well soon!