Major Time Saver: Hinge Will Now Let You Know When You’ve Run Out Of Normal People 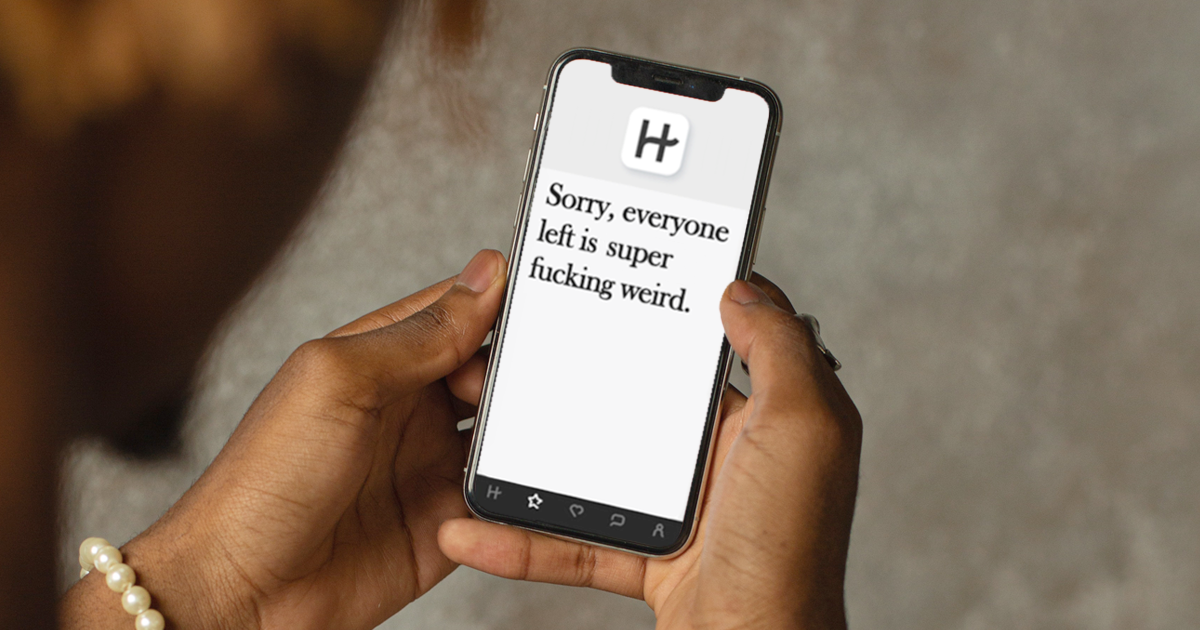 When you’ve been online dating for a while, you might start to wonder if you’ve already swiped through every single person worth meeting. Fortunately, one dating app has stepped up with a new feature that’ll provide a definitive answer to that question: Hinge will now let you know when you’ve run out of normal people.

So amazing! This is going to save people so much time they would’ve spent dating weirdos.

Starting today, once you’ve swiped through your city’s available normal people—as in, people who have a steady job, a reliable social circle, and a solid grasp on personal hygiene—Hinge will send you a notification explaining that your options are about to get a lot worse. After swiping on the final normal profile, your Hinge screen will read, “Heads up: Everyone from here on out is going to have at least one glaring red flag,” with sample photos of a man in a porkpie hat riding a unicycle, a woman with massive gauges doing aerial silks, and a girl sitting on a guy’s lap with her arms wrapped tightly around him captioned, “My big bro!” Users will then be given the choice to delete the app outright or continue swiping through profiles of off-putting people, like those who are either so into fitness they take steroids or so opposed to fitness they claim that fitness is somehow morally wrong.

“Hinge remains dedicated to helping our users find love, which is why we’ll be notifying them when they’ve reached the point that their only remaining options are people who think a seven-hour class about coffee bean roasting techniques is a good first date, or worse, people who know a good first date is getting a drink but will ask you out by saying, ‘Shall we imbibe libations?’” explained a spokesperson for the app. “In the past, after encountering a profile where someone’s bragging about how amazing they are at oral sex, followed by a profile where someone’s singing opera in their voice prompt, followed by one where someone’s super hot but works in private equity, followed by one where someone’s wearing a bunny suit in every photo and the photos were all clearly taken on different days, seemingly spanning several years, users would have to make the assumption themselves that they’d run out of normal people to date. Going forward, thanks to our new technology, our users will know for sure that they have indeed passed through every one of the people their parents could meet without thinking, ‘Dear God.’”

This rocks! Who knew dating could be so streamlined?

Hinge has further clarified that if you yourself are not normal, you will never receive this notification, and you can continue being obsessed with cuddle parties and looking like a wildly different person from picture to picture unhindered. Hinge reps also advise that anyone who receives the “no more normal people left” message and regrets passing on dozens of regular, albeit boring profiles can then download any other dating app, where they will be able to swipe on literally everyone they saw on Hinge all over again.

So much yes! This is seriously going to make a huge difference for anyone who would’ve been willing to try going on a date with a person who says they studied at Hogwarts School of Witchcraft and Wizardry just to see if they’re more normal in person. Thanks to Hinge, you’ll know they’re not.