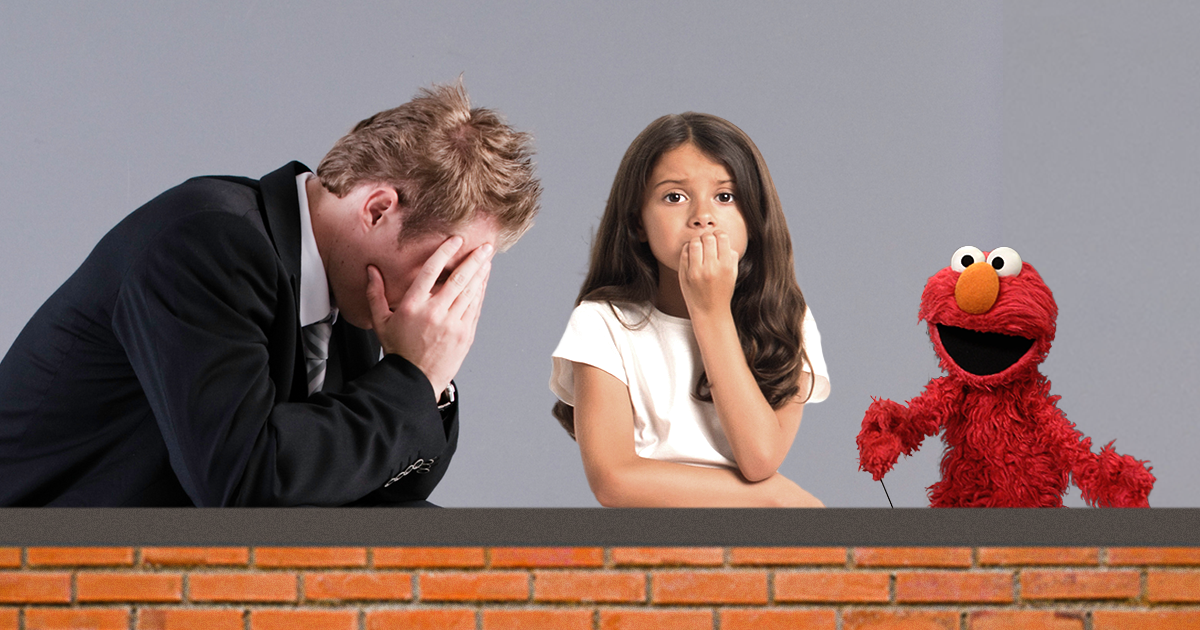 Sesame Street has an amazing decades-long history of using its characters and storylines to address difficult topics in a way that children can understand, yet the show might’ve just outdone itself with a groundbreaking new episode that celebrates diversity and inclusion in a truly beautiful way: Sesame Street just aired a whole episode for kids whose dads feel emasculated by Elmo.

Yes! This is so important for children to see.

The new instant-classic episode, which debuted on HBOMax earlier this week, explores themes of shame, self-esteem, and masculinity as it follows a little girl named Maisie whose father is depressed because he will never be as strong and virile as Elmo. At the start of the episode, Maisie stands on Sesame Street pleading with her father to come out from behind a trash can, where he is hiding and sobbing because he’s too embarrassed to be seen anywhere near a puppet as cool and with as strong of a grasp on the alphabet as Elmo.

“I’m embarrassed because I’m not as awesome as Elmo—he’s got so much more body hair than me, he has an incredible crayon collection, and he refers to himself in third person in a way that just oozes swagger,” Maisie’s dad laments, adding that he could never muster the confidence to walk around in public without a shirt or pants like a total stud like Elmo does. “It’s no wonder he has beautiful, famous women like Katy Perry showing up at his house just to sing songs with him. He’s a real man, unlike me. I’m a disgrace.”

But then, just as Maisie starts to cry, thinking she is the only kid in the world whose dad is threatened by the huge-eyed Muppet, Big Bird appears and sings a heartwarming song about dads like Maisie’s, with uplifting lyrics like, “Elmo makes many dads insecure / With his screams so virile, his counting so assured / It’s totally natural if your dad starts to cry / Whenever he sees this loud red guy!”

This is amazing. Many kids whose dads feel emasculated by Elmo are going to see themselves reflected on TV for the first time thanks to this episode!

The episode also featured a poignant segment with Elmo himself. In it, Maisie’s dad trembles as he goes to shake Elmo’s hand, and Elmo, seeing that he’s intimidated, instantly makes Maisie feel better about her dad’s pitiful behavior. “Elmo never steal anyone’s wife, but some men afraid Elmo could if Elmo wanted to,” Elmo explains to Maisie as her father looks on in awe. “It perfectly normal fear—Elmo very macho and strong, plus Elmo friends with Blake Lively!”

As Maisie begins to smile, finally feeling less alone, Grover, Oscar the Grouch and the Count appear to lovingly pat Maisie’s dad on the head while he trembles nervously in the corner, googling “Be more like Elmo HOW” on his phone. Then, in the show’s final segment, we learn that the episode is presented by the letter T for “testosterone,” a hormone that Maisie’s dad suspects Elmo has much more of than he does—and though he is absolutely correct, Grover assures him that this isn’t anything to be ashamed of. The episode then ends on a heartwarming note as Elmo lets Maisie’s dad win in an arm wrestling contest, at which point Maisie’s dad smiles for the first time all episode and lifts her in the air, yelling, “I did it! I proved I am a cool, tough man just like Elmo!”

What an incredible half hour of TV. This important episode is going to do so much for kids in situations like Maisie’s, who may feel as though they have no support and no one who understands them just because their fathers are having self-esteem issues due to obsessively comparing themselves to Elmo. Our hats are off to Sesame Street for nailing it once again!