Off To A Rocky Start: King Charles’s First Speech To The UK Was Mostly About How Much Better Tuna Tasted When They Still Let Some Dolphin Meat Get Into The Cans By Accident 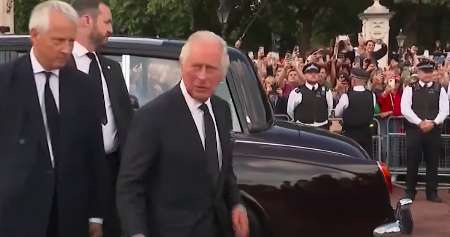 Following the death of Queen Elizabeth II yesterday, all eyes have now turned to her son, who has succeeded his mother and taken the throne as King Charles III. Unfortunately, the new king’s reign seems to be off to a rocky start. King Charles’s first speech to his subjects in the United Kingdom was mostly about how much better tuna tasted when they still let some dolphin meat get into the cans by accident.

Yikes. This is not an auspicious beginning to the new king’s reign.

Speaking from the steps of London’s Buckingham Palace before a crowd of thousands, with millions more watching on television, King Charles stepped up to the podium and immediately said, “Now that my mother is in Heaven with Isaac Newton and the man she hit with her car, I think we can all openly acknowledge that the golden age of canned tuna is behind us. This is because the old warlocks who control the tuna canneries no longer let any dolphin meat slip into their cans every now and then.”

For the remainder of the three-hour speech, Charles spoke to his new subjects about how canned tuna started tasting “sandy” in 1993, and that this decline in quality could be directly traced to the introduction of “dolphin-safe” tuna-canning practices introduced around that time.

Charles went on to say that he would trade “every memory I have of my mother” for “one good can of tuna with a bit of dolphin in it.”

Those in attendance began to look visibly uncomfortable as their new king spent the next hour speaking at length about how much better tuna used to taste when there weren’t “wraiths, ghouls, and Soviets” overseeing the tuna canning process to ensure that no dolphin meat accidentally contaminated the fish. During the speech, the new king made a number of claims that fact-checkers have struggled to verify, such as that everyone in England used to have much silkier, longer hair because of the natural oils they were consuming in the dolphin meat contained in their tuna cans, and that “the Tower Of London has shrunk four inches” ever since dolphin-safe tuna canning became a widespread practice.

Charles also made the claim, which many English citizens found dubious and troubling, that Queen Elizabeth had died due to the “a lack of dolphin meat in her diet,” and that had she been “allowed to eat a pound or two of dolphin flesh here and there,” she would likely have lived another half-century at minimum.

At one point during the king’s address, a reporter from the BBC interrupted to point out that it was actually an urban legend that dolphin meat was ever present in cans of tuna at all, to which King Charles replied, “No, I could definitely taste the dolphin” before immediately launching into a diatribe about how he would dedicate his reign as king to “returning English tunafish to its former glory” by requiring all tuna cans to contain 50% dolphin meat by volume, a proclamation that raised audible gasps and some boos from the king’s subjects who were in attendance.

Charles concluded his address by declaring, “I would rather eat a can of dolphin with no tuna in it then a can of tuna with no dolphin in it. Thank you, and I look forward to being your king until I’m dead.” He left the podium to a smattering of light applause and uneasy murmuring.
Wow. It looks like King Charles really isn’t winning any new hearts or minds with this speech! Experts on the monarchy are already saying that if he hopes to earn the support and respect of his subjects, he’s going to have to let his alienating obsession with putting dolphin meat in tuna cans fall by the wayside. Here’s hoping the new king can change his focus going forward and rise to the challenges ahead!
More posts in News »