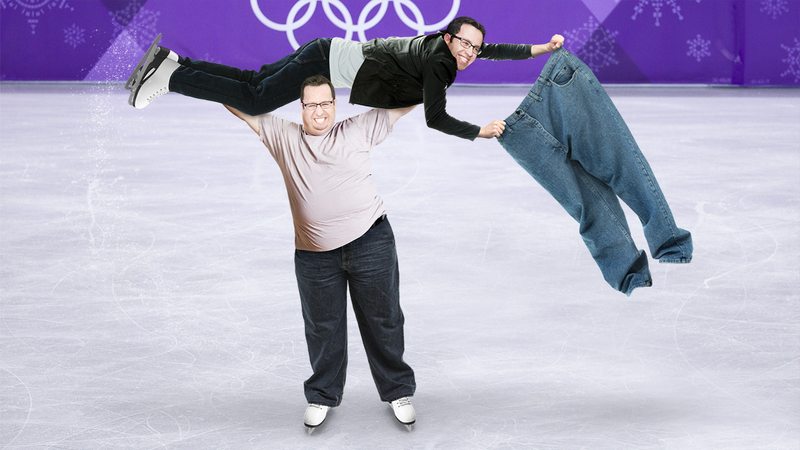 This year’s Olympics have given us a fair share of incredible triumphs and breathtaking moments, but today saw what will surely go down as this year’s greatest Olympic triumph: Fat Jared Fogle and thin Jared Fogle won the gold medal in pairs figure skating with an absolutely gorgeous program that brought the judges to tears.

This is stunning. Fat Jared Fogle and Thin Jared Fogle have given us the defining moment of the 2018 Olympic Games.

The judges were moved to tears by the beauty and elegance of Fat Jared Fogle and Thin Jared Fogle’s graceful, nuanced performance, and they were also completely floored by the extreme difficulty of their performance, which experts are currently heralding as the most technically demanding program in pairs figure-skating history.

The two Fogles’ immaculate routine left the audience awestruck and deeply emotional. NBC camera crews captured hundreds of spectators visibly weeping as the two Jareds finished their flawless routine with a reverse lasso lift, which consisted of Thin Jared holding Fat Jared above his head by the waist as the two glided across the ice, before launching him backwards over his shoulder for a perfect triple axel for their program’s stunning finale.

As the final emotional notes of “Waving Through A Window” played and Fat Jared Fogle and Thin Jared Fogle held each other close as they completed their last flawless spin. The crowd in Pyeongchang knew they had witnessed something truly magical, and they erupted into rapturous applause. Fat Jared Fogle kissed Thin Jared Fogle on the forehead before collapsing to the ice in tears while Thin Jared Fogle wept with joy next to him. The two Fogles basked in the glory of one of the greatest Olympic performances of all time. Their spellbinding skate notched the best score in Olympic history with an even 160.00, the highest of all time.

The two Fogles’ victory is particularly meaningful considering the struggles Fat Fogle and Thin Fogle have faced recently. The road to the Olympics hasn’t been easy, and both skaters have faced their share of adversity over the past few years. Fat Jared Fogle has struggled with extreme obesity, and Thin Jared Fogle was convicted of possessing child pornography in 2015. But the two have worked hard in spite of their personal hardships, and last night their training paid off with one of the most moving figure-skating performances in history.

Unforgettable moments like this is why we watch the games. What an inspiring comeback story for Fat Jared and Thin Jared, who have both worked so hard to overcome obstacles to capture gold for the U.S. The gorgeous performance the two Fogles gave the world on the ice last night will stand as the high-water mark for athleticism and beauty for years to come.