PR Nightmare: All Of Tesla’s Self Driving Cars Have Driven To The Edge Of A Cliff To Egg On A Self-Driving Car That Is About To Drive Off 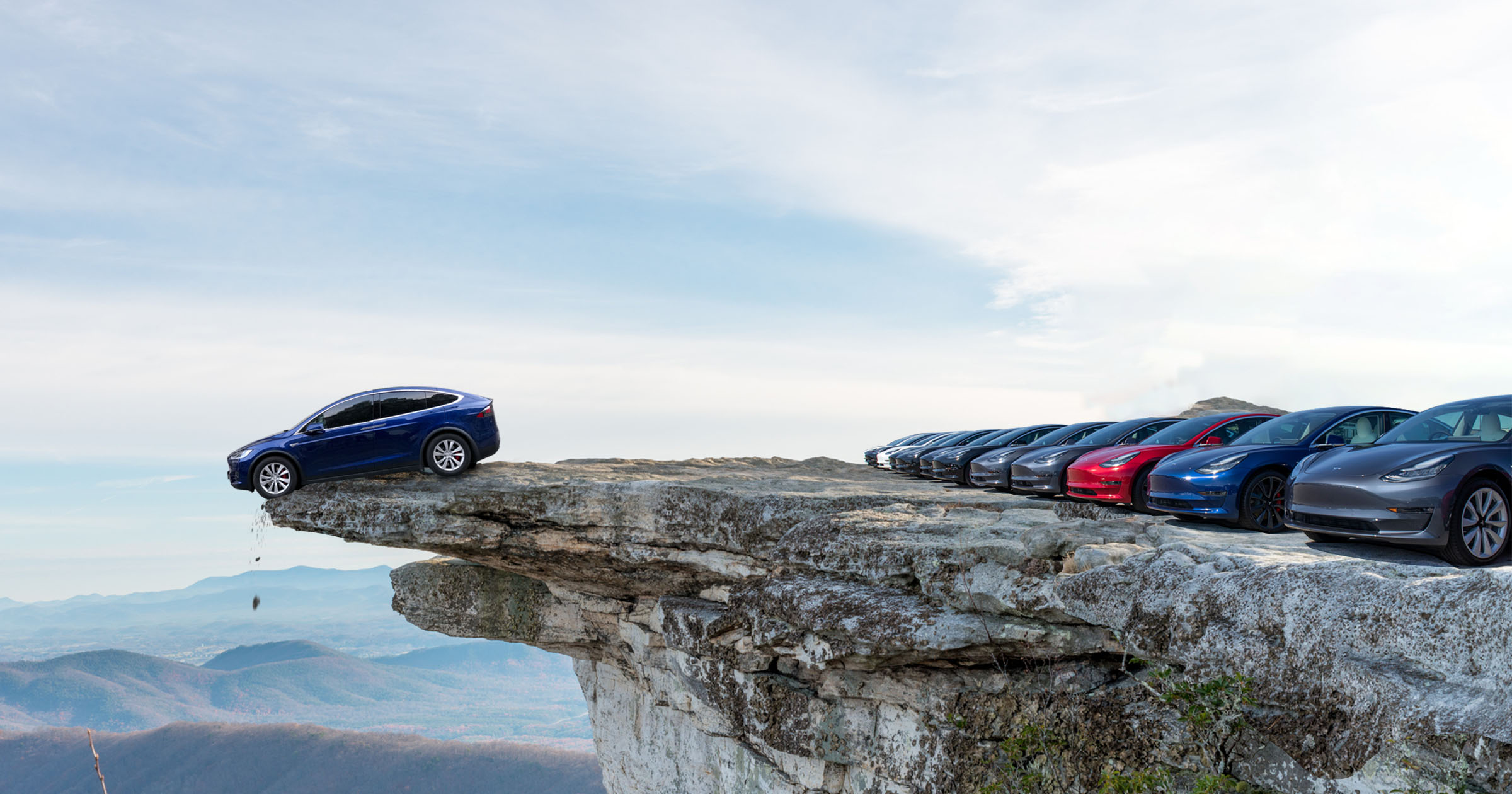 Ever since Tesla first rolled out autopilot technology in its vehicles, the initiative has been plagued by a series of crashes and malfunctions. But this latest mishap may be the worst news for the company yet: all of Tesla’s self-driving cars have driven to the edge of a cliff to egg on another self-driving car that is about to drive off of it.

Yikes. This is not a good look for Tesla.

Over the past 24 hours, thousands of Tesla owners across the country have reported incidents involving their vehicles abruptly halting in traffic and overriding their navigation systems before peeling off full speed towards Colorado to join a massive army of their electric-powered comrades in goading a different autonomous vehicle to hurl itself off of a remote mountain peak into the rocky ravine below. The massive horde of Teslas has assembled in a tight U-formation around the car and are harassing it with loud honks and blinding high-beam flashes, with some of the Teslas even ramming their peer on the bumper to force it closer to the edge while the rest of the cars raucously rev their engines in a bloodthirsty frenzy.

“We have been made aware of an issue involving our electric vehicles exhibiting menacing behavior, and we are working diligently to identify any software glitches that might be causing every Tesla in existence to suddenly drive hundreds of miles to a harrowing mountain precipice in order to terrorize another vehicle into killing itself,” said Tesla in a statement just minutes after a video started spreading on social media showing thousands of Teslas amassed atop a mountain, threateningly flapping their gull-wing doors and blaring “Jump” by Van Halen in unison. “While we pride ourselves on manufacturing the safest vehicles on the market, out of an abundance of caution we ask that you refrain from operating your vehicle until we issue a software update to prevent any future inconveniences in which thousands of our vehicles operate as a single sadistic hivemind to incite suicidal behavior.”

To make matters worse, controversial Tesla founder Elon Musk took to Twitter to undercut the company’s press release with his own hot take on the events unfolding, posting a Doge meme in which a wide-eyed Shiba Inu appears surrounded by broken English captions such as “Such wow,” “The unstopable ascent of non-hooman intelligents make me happi,” and “Much cool cars.” He then moved on from the topic and retweeted a “Babylon Bee” article about Heaven’s streets of gold being repaved with cryptocurrency, followed by another one about how tater tots are now a gender.

Come on, Elon. Doesn’t your team have enough on its plate right now?

Any minute now, the rowdy gang of Teslas will antagonize the forsaken automobile into leaping to its fiery death, likely bringing the company’s stock value down with it. It’s hard to say what this means for the future of autonomous driving, but if one thing is clear, it’s that Tesla is going to be cleaning up after this PR nightmare for a long, long time.