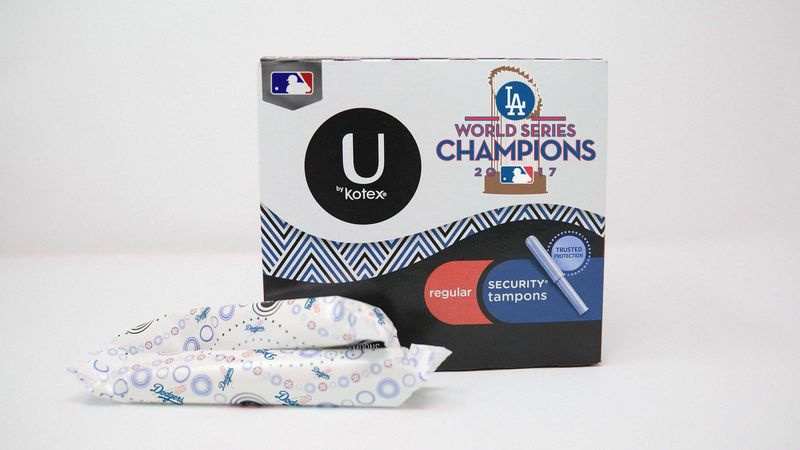 Corporations get a bad reputation for being cold and heartless, but Kotex just proved that it’s one company that’s truly dedicated to making the world a better place. Following the Astros’ World Series victory last night, the tampon manufacturer has announced that it will be donating all of its unsold “Dodgers World Series 2017 Champions” tampons to impoverished women in Africa!

Um, we love it! Let’s get those supplies to people who need them!

Every year when Kotex manufactures its commemorative World Series tampons, the company is forced to make tampons in advance of the final game congratulating both of the competing teams to prepare for either possible World Series outcome. Kotex ends up with hundreds of thousands of boxes of extra tampons that congratulate the losing team, and obviously, no sports fan in the U.S. is going to be shelling out cash for tampons whose applicators say “Dodgers World Series 2017 Champions.” But instead of allowing warehouses full of tampons dyed with the Dodgers logo to become trash or useless curiosities, Kotex has wasted no time in boxing them up and sending them to distribution centers in impoverished areas across East Africa.

Kotex spokeswoman Cara Leeson said that she hoped the tampons would make a dent in the extreme need for feminine hygiene products that exists in many developing countries. “In the United States, women would feel totally ridiculous inserting a ‘Dodgers World Series 2017’ tampon, but in communities where even the most basic amenities can be hard to find, they can be extremely valuable. We’re glad we can take Kotex products like our Dodgers tampons or our ‘Bridge Of Spies 2016 Best Picture Winner’ tampons—which would have otherwise gone to waste—and donate them to people who need them.”

Amazing! After an extremely exciting World Series, we’re glad Kotex was able to take its thousands of Dodgers tampons and use them to do some good for humanity. Congratulations, Kotex, you’re officially the coolest company ever!