Righting Wrongs: Subway’s New Spokesperson Is A Man Who Gained 300 Pounds Eating Its Sandwiches And Also Has No Plans To Act On His Lust For Children 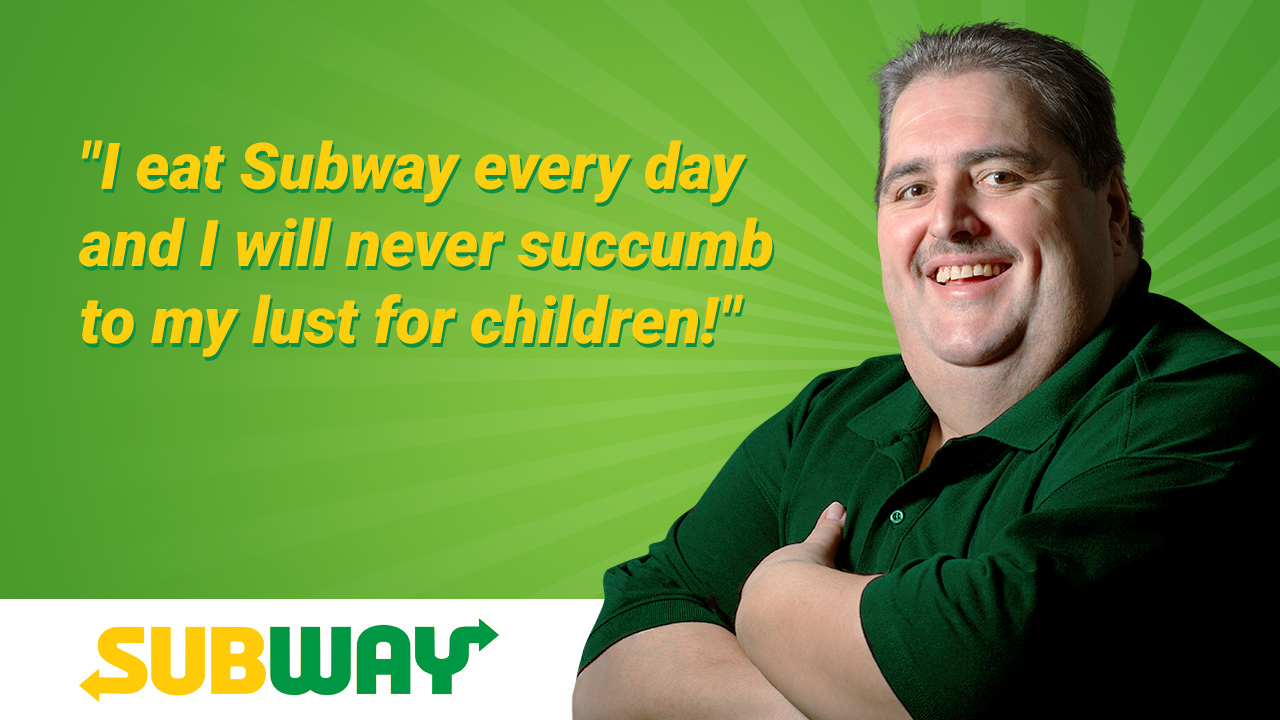 Subway has long been recovering from the PR nightmare of Jared Fogle being unmasked as a pedophile, but it looks like now it’s finally turning a corner. Today the restaurant chain took a huge step in the right direction by introducing a new spokesperson who gained 300 pounds eating its sandwiches and will also never act on his lust for young children.

By hiring what appears to be the polar opposite of Jared Fogle, Subway is showing that it’s definitely serious about righting past wrongs.

Making his debut appearance in a commercial that will air nationwide starting today, the new enormous spokesman holds up a pair of his old small pants that are now far too tiny for him to wear and says, “Hi, Subway sandwiches made me gain 300 pounds, and I have never molested a child. Eating 12 inches of bread, cheese, and meat every meal has caused me to become morbidly obese, and I only seek out pornography featuring performers who are a minimum of 18 years old. Thank you.” The spokesman then shows the camera some magazines from his pornography collection to prove he isn’t lying.

Wow, what a powerful message—and one that’s definitely going to win back customers’ trust.

“We’re pleased to start featuring a new spokesperson in our commercials, an inspirational Subway customer who really ballooned up thanks to our food, who has also vowed to never indulge in statutory rape or human trafficking,” announced Subway in a press release. “He used to be very thin until he started to Eat Fresh™ and now he weighs nearly 500 pounds thanks to Subway favorites like our Meatball Marinara or Cold Cut Combo. Additionally, while he would very much like to have sex with minors, he has absolutely no intention of acting on those urges. We’re ready to atone for past mistakes, and we hope you’ll see this new spokesman as proof of that.”

Subway received a major PR black eye with the whole Fogle fiasco, but this new fat spokesperson who never acts on his latent pedophilia is a big sign that the restaurant chain is redeeming itself and moving in a better direction. Kudos to Subway for doing the right thing!