Shameful: Congressional Republicans Are Dodging Questions About The AHCA By Posing As Cavemen In The Smithsonian’s Early Man Diorama 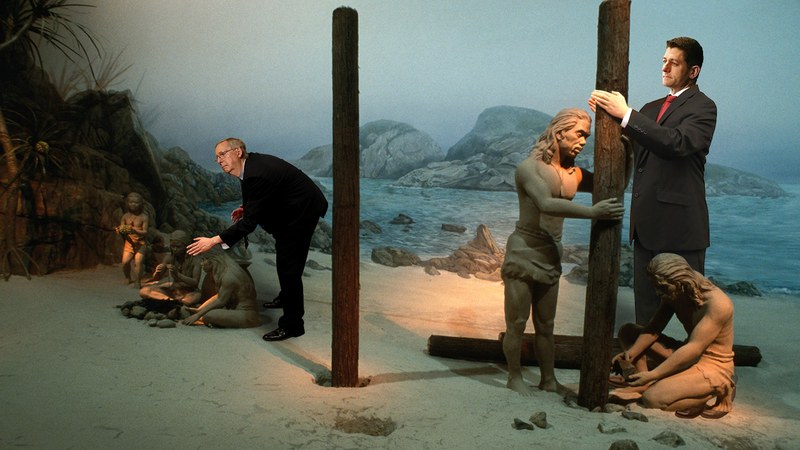 Well, here’s something that will make your blood absolutely boil.

If you’ve got something to say to your representative about the Affordable Healthcare Care Act currently being pushed through the Senate, it looks like you might be out of luck. Rather than facing their constituents and owning up to their policy decisions, Republican congresspeople are dodging questions about the AHCA by sprinting into the Smithsonian and posing as cavemen in the “Early Man” diorama.

According to reports, at approximately 10 this morning, several top Republican officials, including Speaker Paul Ryan and Senator Mitch McConnell, were noticeably absent from a scheduled press conference about the embattled AHCA. An eye witness had spotted them sprinting into the Smithsonian museum, where they had quickly clamored over the barrier at the prehistoric man exhibit to hide from members of the press and constituents wanting to grill them on their controversial health bill. Within 90 seconds, they were behind the glass, draped in leopard skins and posing among plastic replicas of cavemen roasting bison meat around a fire, hiding in plain sight.

By the time the tipped-off voters entered the lobby of the National Museum of Natural History, the senators had already gone inside the exhibit, stripped several plastic cavemen of their clothing, thrown the dummies to the side, and placed themselves in identical poses holding spears and large wooden clubs. Hot on their heels, the incensed mob, looking for answers on the AHCA, observed the scene through the glass, but after glossing over McConnell and Ryan, who were standing perfectly still, kept on walking and continued looking elsewhere in the museum.

Yikes. Members of the House and Senate have done some seriously cowardly things to avoid answering for their policy decisions in recent months, but this absolutely takes the cake.

Reportedly, despite the bill being voted on next week, not a single AHCA supporter was able to find their senator or congressperson within the Smithsonian and ask them about the future of healthcare. There was a tense moment when one constituent who had driven in all the way from Wisconsin stared at Paul Ryan dressed as a Neanderthal for 15 seconds and seemed on the brink of recognizing his representative when a rambunctious school tour group came in and took over the space, causing the man to continue his hunt elsewhere. This, paired with Mitch McConnell needing to scratch an itch on his nose for over 90 minutes but not once betraying his stance holding a club over his head, shows just how dedicated they are in avoiding all questions about this bill.

Wow. At the rate it’s going, it seems like our government would rather explain the AHCA to a stuffed lion in the Smithsonian than the American people.

Bottom line: Republicans’ cowardly actions today showed a full disregard for open democracy. Their party better step up, because voters are watching, no matter which exhibit they try to hide in next.