Shrouded In Secrecy: Rex Tillerson Got Off A Plane In A ‘Crocodile Maniac’ Hat Holding A ‘World’s Hottest Dumpling’ Mug And The Press Is Trying To Figure Out What Country He Just Came From 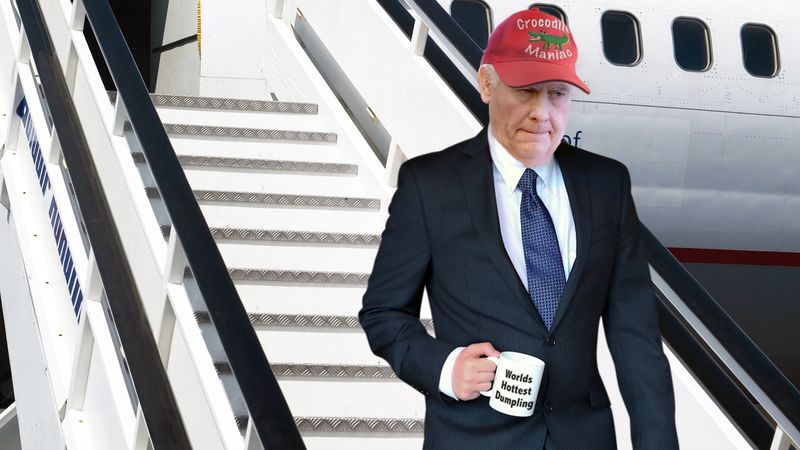 Rex Tillerson has certainly established himself as a man of mystery in his first few months as secretary of state, and now it looks like he’s doubling down on his secretive reputation. The former ExxonMobil CEO threw the press an absolute curveball this morning when he stepped off his plane wearing a “Crocodile Maniac” hat and drinking from a mug that says “World’s Hottest Dumpling,” leaving reporters racking their brains over what country he could have just come from.

Wow. It looks like Rex Tillerson’s shroud of secrecy is becoming more difficult to see through by the day.

Tillerson descended the stairs to the runway early this morning while donning the puzzling hat and mug, neither of which gave the press even the slightest indication of where he had been. True to form, Tillerson quickly made his way to his car after stepping off the plane without fielding questions, only saying, “Great trip,” and leaving the task of figuring out where he had traveled solely to reporters.

“Is ‘Crocodile Maniac’ a European TV show?” one foreign-policy journalist asked another, a handful of them hanging back to try to crack the secretive exploits of the secretary of state. “Or was he in an area that just has a lot of crocodiles? Maybe India?”

The baffled press corps continued to grasp at straws to explain where the notably tight-lipped Tillerson had just been traveling to, with one reporter noting that Googling the two phrases together yields no helpful results.

“The ‘World’s Hottest Dumpling’ mug is probably a gift from somewhere in Asia, but that doesn’t really narrow it down too much,” added another reporter, who went on to posit that Tillerson might have also just brought it from home, further obscuring the purpose and location of his trip. Making matters even more confusing, Tillerson reportedly had a lei tucked into his suitcase, but was also sporting a “My Other Keys Are A Djembe” keychain.

Yeesh. Rex Tillerson sure seems determined to keep the media, and the country at large, in the dark about his role on the world stage. Whatever he’s up to, it’ll be interesting to see if the secretary of state becomes any more open to the press moving forward, or remains this inscrutable enigma.