Stolen Valor: This Man Is Wearing A Toupee Despite Having Floor-Length Golden Hair 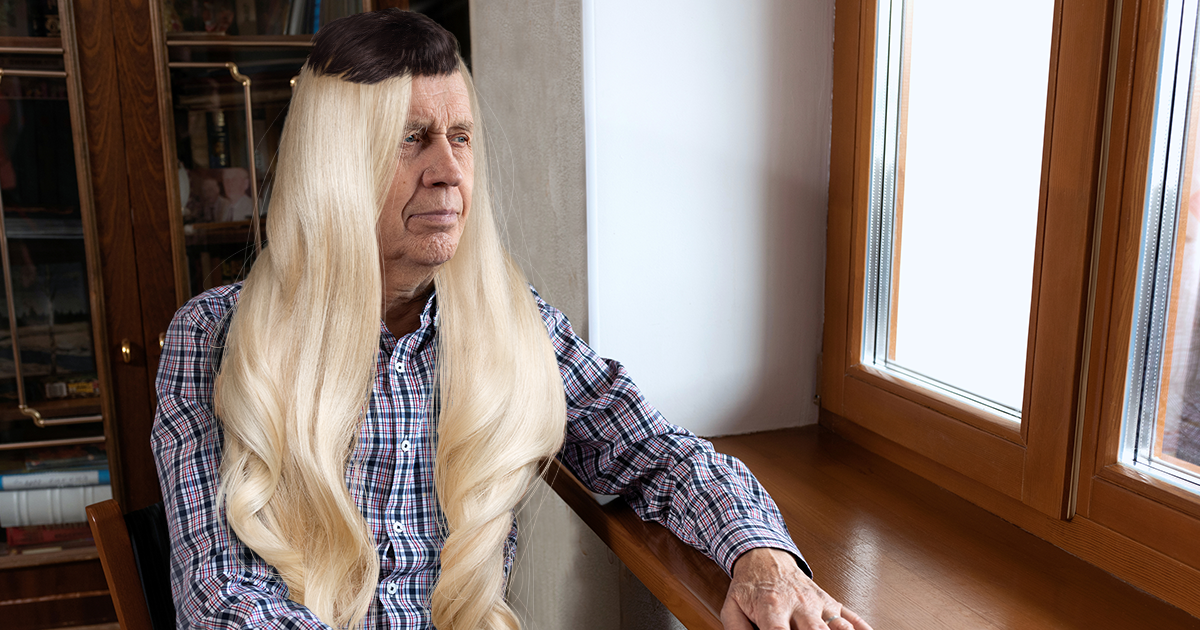 There’s nothing more disgusting than falsely exploiting the bravery of others to enhance your own public image, and this son of a bitch might be the worst case we’ve ever seen: This man is wearing a toupee despite having floor-length golden hair.

Oh, hell no. Not just anyone can wear a toupee—you gotta earn that shit, motherfucker.

In a just world, toupees would only be worn by those who have actually undergone the harrowing ordeal of male-pattern baldness, but absolute piece of shit Silas Blanchard has co-opted the toupee for his own reputational gain even though he still possesses a robust mane of lush, flaxen hair. This imposter has no idea what it’s like to awkwardly crane your neck up at a hand mirror angled at a bathroom mirror to examine a widening bald spot, and while he probably thinks he looks like hot shit strutting around in that awesome, stately toupee, he wouldn’t last one goddamn day out in the real world if he was actually suffering from hair loss. Some men spend years, even decades, rubbing medicinal salves onto their scalps and sleeping in weird, non-FDA approved electrode caps, but this Rapunzel-looking shitheel thinks he can just skip all that and cut straight to the perks of toupee ownership as if it’s merely a fashion choice and not an entire way of life.

Part of what makes this so galling is how easily you can see through his attempts to pass himself off as an authentic toupee-wearer if you know what to look for: He no doubt thinks it looks convincing how he reflexively claps a hand over his toupee whenever a strong breeze comes up, but the radiant flowing locks billowing luxuriously out behind him should instantly set off alarm bells that this guy’s not what he seems. He also frequently asks total strangers if they’ve noticed that he’s wearing a toupee, when a real balding guy would never draw attention to their toupee so tactlessly, preferring instead to simply wear it in quiet dignity. Perhaps the most infuriating display we’ve seen came after seagull snatched his toupee during a trip to the beach, when he made a big show of chasing after it and shouting, “My toupee! My toupee! I can’t live without my toupee!” despite looking straight out of a Pantene commercial with his naturally gorgeous tresses glimmering in the sunlight.

Fucking hell, is nothing sacred?

We’d really like to get up in this fraud’s face and confront him over his sickening, cowardly little masquerade. He may think he can walk the walk in that toupee, but subjecting him to a little direct questioning like “Who was your practicing hair loss specialist, sir?” and “What hair transplant center were you treated at?” would expose him as the phony long-haired charlatan that he is. Of course there’s nothing inherently wrong with having a full head of splendid, lustrous hair so long it can tickle your ankles, but trying to appropriate the toupee when you don’t have the partially exposed scalp to back it up is deception at its most bastardly.

Seriously—this is a bridge too fucking far.

What an utterly contemptible lie this double-dealing asshole is living. Here’s hoping he’ll come to his senses and hang up that toupee for good, or the toupee-respecting people of this country might have to take matters into our own hands. Better watch your back, fucko.