Taking Precautions: Donald Trump Is Having The Teeth Of All Of His Cabinet Members Removed So They Cannot Bite Him 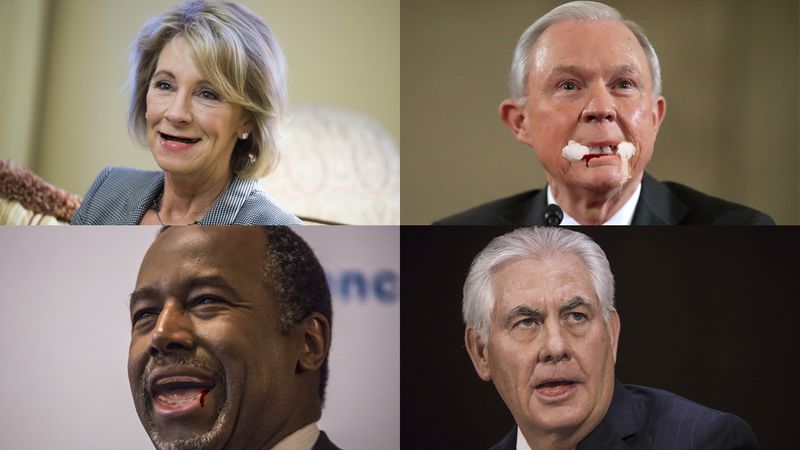 Ever since he was elected in November, Donald Trump has proven that it’s not going to be business as usual in Washington anymore. As his inauguration approaches and his cabinet selection process nears completion, President-elect Trump has once again proven that he’s the refreshing force of change Washington needs: This morning Donald Trump announced that he is having the teeth of all of his cabinet members removed so that they won’t be able to bite him.

There’s no question about it: Donald Trump isn’t taking any risks when it comes to security.

Trump made the announcement that Rex Tillerson, Jeff Sessions, and all his other cabinet nominees’ teeth had been removed early this morning on Twitter:

In a series of follow-up tweets, the president-elect clarified that the decision to render all cabinet members toothless was a safety precaution to prevent those closest to Trump from ever biting him:

It looks like Trump definitely means business! Nobody in the D.C. establishment has ever demonstrated this type of commitment to making sure that the president stays safe.

Officials from Trump’s team confirmed earlier this morning that all nominated cabinet members have had their teeth ripped out of their mouths and that the process took a long time.

The president-elect also stated in a later tweet that, even though he had not appointed Rudy Giuliani as a member of his cabinet, he had still decided to have Mayor Giuliani’s teeth removed as well.

Now that’s how you shake up Washington! It looks like when Trump takes office, he can simply focus on policy without having to worry about members of his cabinet sinking their teeth into his skin or chomping down on his fingers. We’ve officially entered a new era of security!