The Pandemic’s Devastating Toll: Experts Say The U.S. Suicide Rate Is Skyrocketing With Every Passing Month That People Are Unable To See The Blue Man Group Live 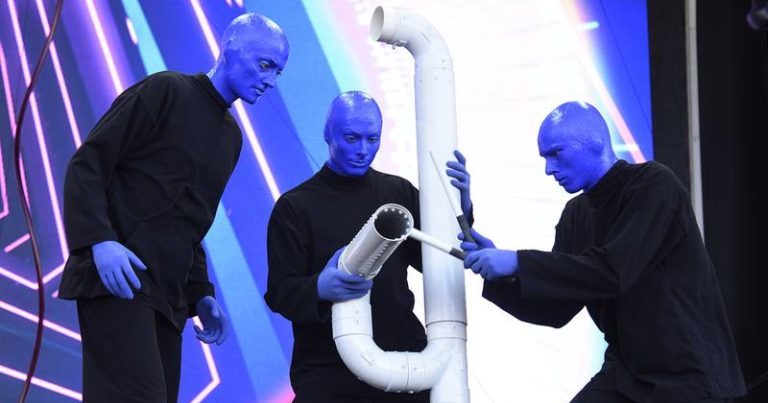 Throughout the pandemic, over 580,000 Americans have died from COVID-19. This is a horrifying statistic, but according to experts, the full scope of the devastation is unfortunately far greater: A new public health study shows that the U.S. suicide rate has been skyrocketing with every passing month that people are unable to see the Blue Man Group live.

Just awful. What a grim chapter in our nation’s history.

According to new research by the National Institute Of Mental Health, Americans have been taking their lives at increasingly higher rates each month since the Blue Man Group stopped performing shows on account of the pandemic. With the public suddenly deprived of their sole source of mute, expressionless alien guys drumming on PVC pipes and blasting audiences with toilet paper launched from modified leaf blowers, desperation has truly taken its toll—in April 2021 alone, over 4,000 suicides were reported in areas across the country where the Blue Man Group has stopped performing, with some localities declaring the lack of access to the Blue Men’s signature high-energy percussion-based comedy an official state of emergency.

Middle-class Caucasians appear to be especially suffering from the lack of Blue Man Group access, as the concerts have long represented a peak cultural experience for white suburban families, who often travel to big cities to enjoy the Group’s funky yet accessible rhythms and family friendly antics after long days of sightseeing and dining at Hard Rock Cafes. In one particularly disturbing case, a white family of five in New Jersey committed group suicide by funneling carbon monoxide from their Subaru Outback’s exhaust pipe into their home while they sat on their living room couch watching the Blue Man Group’s Tiny Desk concert on TV.

“Unfortunately, our country’s mental health system just isn’t equipped to handle this sudden surge of millions of Americans who are struggling to cope in a world where they can’t watch three bald, blue men splash neon paint on stage in various amusing ways,” said NIMH researcher Emmitt White. “Not only are Blue Man Group performances fun, but they also have a lot of heart, which makes for a truly unforgettable concert experience that we’re now seeing that some people just cannot live without. Human brains simply aren’t wired to handle this isolation from drum- and paint-based performance art.”

White went on to note that, while virtual concerts might offer a temporary solution in the meantime until U.S. society can safely reopen, they unfortunately cannot fully recreate the laughter, joy, and wonder of watching wide-eyed blue guys banging on a drumbone in-person.

With the end of the pandemic so close in sight, it’s difficult but necessary for us to reflect on the far-reaching impacts it has had on ourselves and our communities around us. It’s safe to say that once the pandemic lets up, people won’t take the Blue Man Group for granted again. But until then, please look after yourselves and others, and remember that we’re all in this together.