They Just Want To Get Through The Day: Axe Body Spray Has Released A New Undetectable Scent For Shy 8th Grade Boys Who Don’t Want To Be Noticed 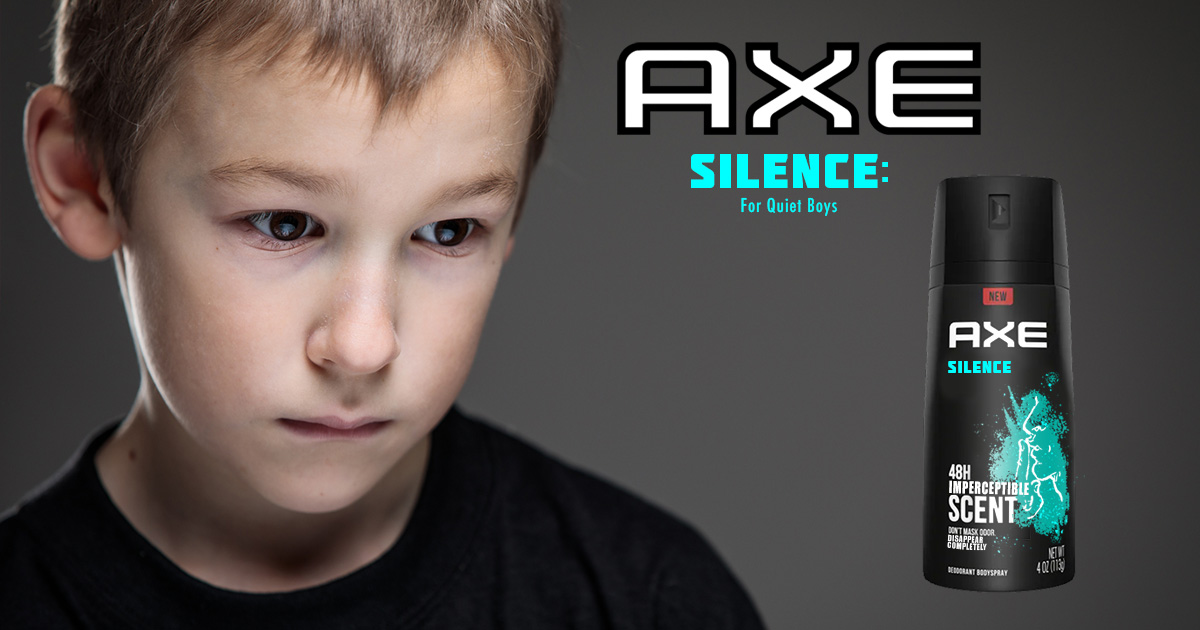 Middle school can be a tough time for kids, especially ones who are still trying to find their confidence. But one popular grooming products company just unveiled an awesome new solution for kids who just want to be left alone as they struggle to come into their own: Axe Body Spray has released a new undetectable scent for shy eighth grade boys who don’t want to be noticed.

So much yes! This is a total life-saver for awkward, sheepish boys who just want to make it through the day.

In a press release sent out earlier today, Axe announced a new body spray called Silence that has no scent whatsoever, allowing awkward, bookish preteens to participate in the formative experience of spraying themselves down with body spray after gym class but without having to worry about a strong fragrance drawing attention to them or their wispy mustache hairs they’re so self-conscious about or their blistering acne that won’t go away even though they dab toothpaste on it every night like they read you should do on Yahoo Answers. With a tap water-based formula specially designed to go entirely undetected by judgemental peers, the body spray seems like the ideal solution for boys who won’t raise their hands in class even when they know the answer because they don’t want anyone to see the sweat stains under their armpits and would much rather just sit alone in the back of the room drawing pictures of various monsters from Spirited Away.

“At Axe, we know that our core scents aren’t for everyone, which is why we created Silence, a fragrance-free body spray for the kind of boys who are still too nervous around their crushes to want their attention and really only ever feel comfortable online, where they can be whoever they want to be,” said the press release. “If you’re a 12- or 13-year-old boy with floppy hair who wears Converses with handwritten song lyrics on them that express your feelings so you don’t have to, then this is the body spray for you.”

“Just give yourself a quick spray after gym class, pull the hood of your hoodie up over your face so you don’t have to make eye contact with anyone, then walk confidently out into the halls of your school knowing that absolutely no one will pay any attention to you except maybe your two also-quiet friends who you know through accelerated math courses,” the press release continued. “In these early, baffling stages of puberty, we know that all you want to do is get back home from school in one piece and tell your mom your day was ‘fine’ without elaborating further before retreating to your bedroom to play video games for the rest of the night, and Axe Silence empowers you to do just that.”

It’s about time there was a body spray for boys who’d never wear anything flashier than the same faded, gray hoodie that they wear every day, let alone spritz something on their body that would possibly make someone acknowledge their presence! And what’s also cool is that Silence is sold exclusively in two-packs so that there’s enough to last an entire school year, alleviating boys from the stress and humiliation of ever having to ask their mom to buy them more. Seems like this body spray is the absolute perfect solution for timid, sensitive boys who’d really just prefer to go under the radar until the big end-of-year talent show, when they will finally make themselves known to the entire student body with a spectacular acoustic guitar performance of “Classical Gas” that is all but certain to make them the most popular kid in school.

This is going to be a total game changer for eighth graders whose worst nightmare is when the teacher says, “Let’s hear from someone who never speaks”! Middle school would have been so much easier if Axe had released this scent back when we were preteens! Well done, Axe!