Total Time Saver: Bumble Will Automatically Delete Your Account If There’s No One Out There For You 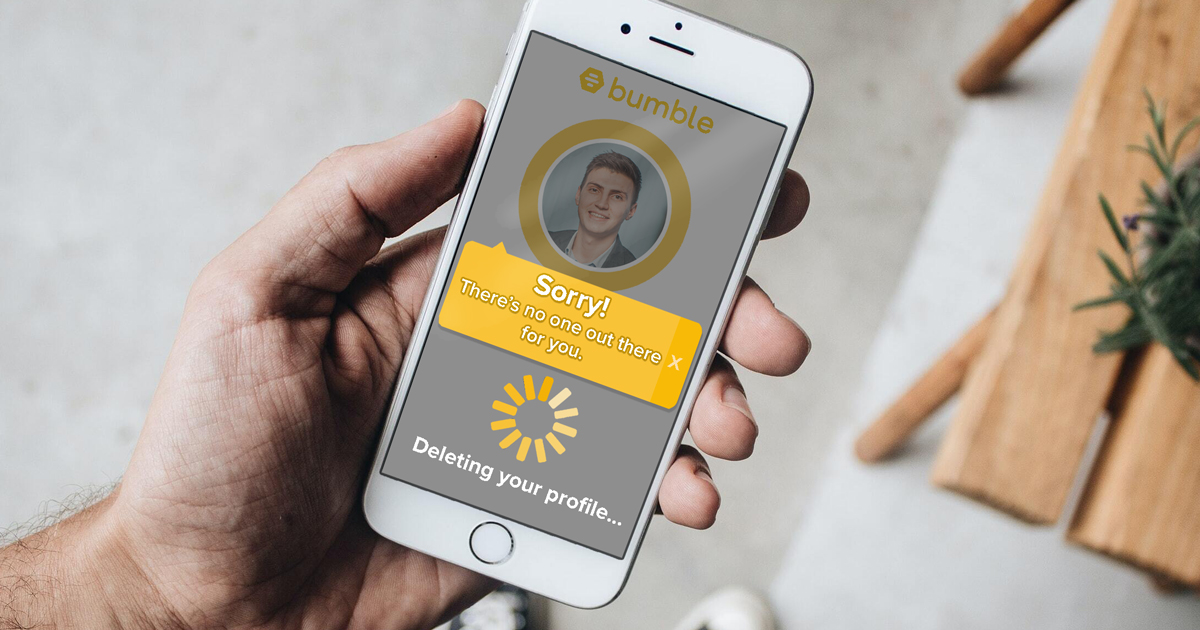 Searching through dating apps to try to find your soulmate can definitely drain your energy, but one online matchmaking service has stepped up with a new feature that’s about to save you a ton of time: Bumble will automatically delete your account if there’s no one out there for you.

Awesome! This is going to make dating so much better!

Starting next week, if you wake up to find that your Bumble account has been deleted, it means that their system has determined that no one is ever going to love you and that you are going to spend the rest of your life alone. Using a proprietary algorithm that analyzes a user’s looks, personality, emotional baggage, and general vibe, Bumble is able to determine with over 97 percent accuracy if a person is never going to meet ‘the one’ because for them ‘the one’ does not exist.

“While in the past we’ve welcomed all adults to use our service, we’ve since realized that there’s no point in forcing our users to waste time online dating if they’re just going to wind up alone anyway,” said a spokesperson for Bumble in a press release. “We hope that by preventing unlovable people from using our app, they can instead spend their time with their married friends who’ll soon have kids in order to increase their chances at being named a godparent, since having a family of their own is obviously never going to happen.”

If your account does get deleted, the dating app recommends that you don’t panic, and instead head over to your inbox, where you’ll see an email from Bumble with the subject, “It’s Okay! Hobbies Can Be Just As Fulfilling As Lifelong Romance.” This helpful final dispatch from Bumble contains a list of exciting activities, like rock climbing and playing the piano, that you can take up now that true love’s off the table. The company further explained that while they can’t stop former users from joining other dating sites, they strongly suggest that people accept their fate immediately, because the sooner they stop dating, the more it’ll seem like they actually enjoy being alone, which ultimately will come off as slightly less sad to everyone who knows them.

Hell yes! This is seriously going to save people from spending years of their life messaging people on dating apps just to discover that nobody’s ever going to love them. What an awesome new feature. Your move, Tinder!