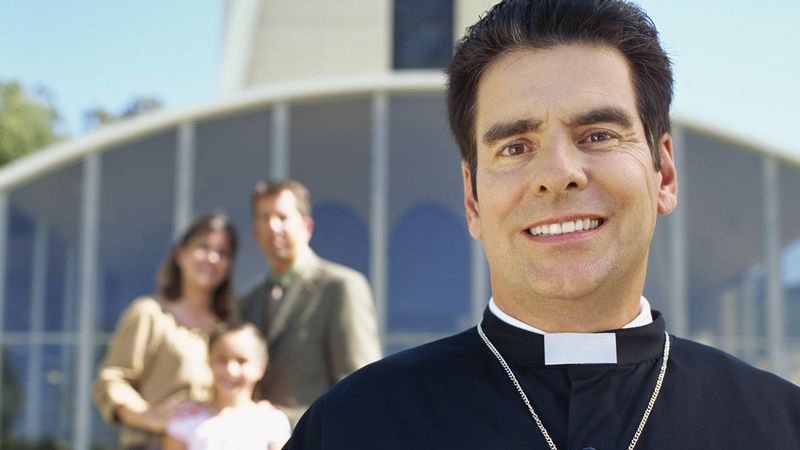 Twenty-two priests open up about how they respond when confronted with evil.

1. Father Dennis Fitzharris – “I’m not sure I understand the question.”

3. Father Curtis Lander – “I don’t believe I’ve ever found myself in such a situation.”

4. Father Luis Aguirre – “Do you mean the actual devil, in the flesh? Because that’s not quite how it works.”

5. Father Rudy Burnham – “I’ve never thrown anything at the devil.”

6. Father Peter Arons – “The only way to combat the devil is through faithfulness to the Lord Our God.”

7. Father Lucas Gutmann – “I’m afraid I don’t have an answer for you.”

10. Father Christopher Enright – “I can’t recall having ever thrown anything at the devil.”

11. Father Marcus Urbano – “Nothing to my recollection.”

12. Father Leslie Gatling – “My duty as a priest is to serve people spiritually, not to physically fight the devil.”

14. Father Simon Dailey – “I can’t say I’ve ever been in such a situation, but even if I were, I don’t believe I’d throw anything.”

16. Father Arthur Hensley – “The devil has never appeared before me in person.”

17. Father Francis Bastian – “I threw a car at him. I don’t know how I did it, but I did. I missed by about 10 feet and broke a mailbox. He was laughing at me and making bad thoughts appear in my head, and the cross pendant I was wearing melted. When he finally disappeared, I threw up.”

18. Father William Landauer – “I’m a bit confused. Is your question a metaphor for something?”

19. Father Anthony Easton – “The Bible says to love your enemies, so I don’t think I’d ever throw anything at the devil.”

20. Father Patrick Harper – “I’ve never done anything like that.”

21. Father Preston Roberts – “The devil doesn’t walk among us in a physical form.”

22. Father Paul McGowan – “I think you and I might have different ideas about what the devil is.”