We Get It, You’re An Ally: Matt Damon Went Totally Overboard At The Oscars When He Ran On Stage Holding Harvey Weinstein’s Severed Penis To Support The #MeToo Movement 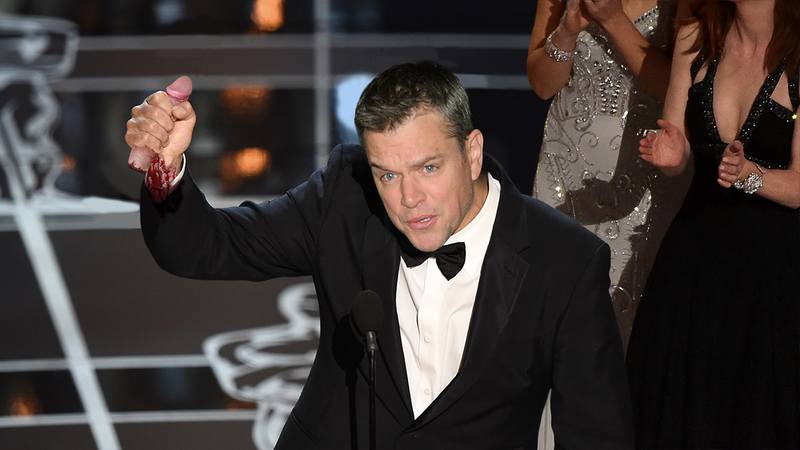 You can tell Matt Damon really wants to be seen as a champion of women, but he definitely went a little over the top just moments ago at the Oscars. In a misguided attempt to support the #MeToo movement, Damon interrupted the award show by running on stage holding Harvey Weinstein’s severed penis.

Seriously Matt, way to make this evening all about you instead of the actresses we should be celebrating tonight.

You can tell that Damon’s heart is in the right place, but it came off as a little tone-deaf when he leapt behind the podium and shouted “I believe women! I cut this off Harvey Weinstein with garden shears!” while waving the detached penis above his head. Talk about being a little too desperate to be on the “right side.” Women simply don’t need Matt Damon intruding into their moment holding Harvey Weinstein’s genitals, as if he’s heroically coming to rescue a helpless damsel in distress.

It’s nice that Matt is trying. It really is. But it came off as mansplaining when he triumphantly boasted, “This means that Harvey Weinstein doesn’t have a penis anymore.”

The worst part is that Damon pulled his little stunt right in the middle of the award for Best Supporting Actress, ruining Allison Janney’s acceptance speech. Apparently Damon thinks that talking over a woman and hoisting up Harvey Weinstein’s mangled phallus is the right way to support womankind.

Okay, Matt, we get it. You’re a feminist, you castrated Harvey Weinstein, you’re one of the good guys. What do you want, a medal?

Matt Damon might play the main character in his movies, but in real life he has to take a backseat and let women lead the way on #MeToo. It’s time for Damon to shut up, put down Harvey Weinstein’s disembodied penis for a second, and listen to what women have to say.