You Go, Girl: Just 3 Weeks After Her Badass Golden Globes Speech, Oprah Has Become The Dictator Of Venezuela After Leading A Successful Military Coup 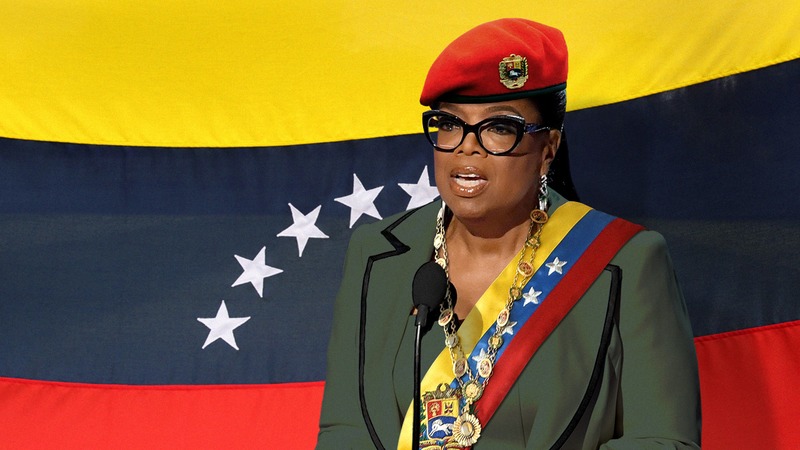 Since winning the Golden Globes and the internet with her amazing mic drop speech, Oprah Winfrey has not taken her foot off the gas pedal. The empowering media mogul has shown us once again that the future is female by overthrowing the government of Venezuela and installing herself as dictator in a military coup.

Yas, presidente! Oprah has absolute power over the Venezuelan populace, and we can’t get enough of it!

Immediately after her passionate Golden Globes speech, Winfrey flew down to Caracas and began speaking her amazing truth to the Venezuelan police and military, rallying them to join her squad. Although Oprah lacks political experience, there was no denying her totally inspirational leadership abilities, eloquent charisma, and desire to rule Venezuela as its unquestioned autocrat. You better believe she totally slayed at her intricate political maneuverings, because it wasn’t long before former Venezuelan dictator Nicolás Maduro was arrested and put before a firing squad in the ultimate display of girl power.

For anyone who says that a woman can’t purge dissidents, just look at the forced labor camps springing up across Oprah’s Venezuela.

Now Venezuela’s citizens are lucky AF because every television channel has been seized by the state-run Oprah Winfrey Network, and it’s illegal to miss her totally amazing daily proclamations about grain prices and how turning in enemies of the state will earn you Oprah Points. And in a move of female empowerment, Oprah used her very first address to the nation to thank her long-time bestie, Gayle King, and appoint her to lead the National Ministry of Loyalty.

Wow. Oprah Winfrey may be best known as a TV personality and businesswoman, but this consolidation of power in Venezuela shows that her ambitions go far beyond that. Could her taking over Venezuela in a bloody coup be a stepping stone to running for president in 2020?? Only time will tell.