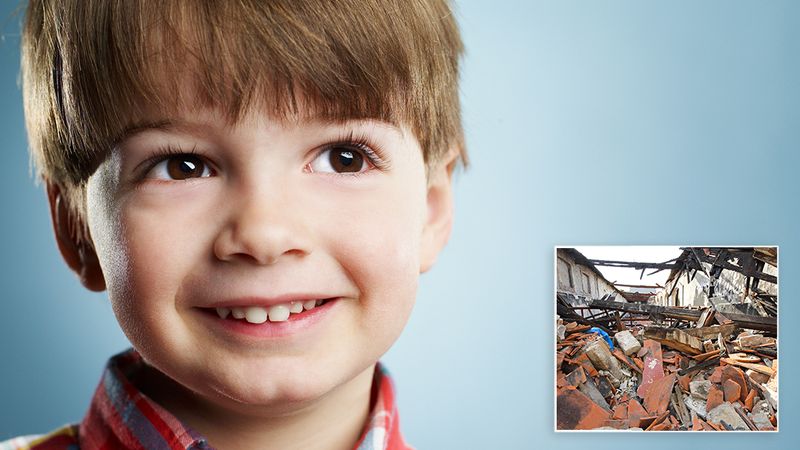 These kids seriously need to pull it together.

Mr. and Mrs. Kistner knew Ethan was more suggestible than the average 6-year-old, which is exactly why they’d strictly prohibited him from listening to songs that featured drums. They had no idea just how much they underestimated the ridiculous ease with which their son’s imagination could be corrupted. One night, during a family dinner, a car drove down their street blasting ZZ Top’s drum-containing hit “Sharp Dressed Man” loud enough to be heard from inside the house. Ethan then grew quiet, solemnly asked to be excused from the table, and was found across town an hour later watching flames engulf St. Bartholomew’s Church as he patted the drum part of the ZZ Top song on his soot-covered knees. Clearly, Ethan, you have some maturing to do before hearing a song with drums in it again.

Cailee’s sponge-like mind apparently only needed one measure of the drums from Queen’s “We Will Rock You” to be convinced that she should become a church arsonist. The third-grader heard the iconic boom-boom-bap at a professional hockey game she had been taken to by her dad, who quickly covered her ears and rushed her home to undo the damage with some drum-less, violin-only classical pieces. Cailee was too far gone. On the ride back, she snatched the car’s cigarette lighter out of the socket, lit her Rangers jersey on fire, and dove out of the moving vehicle, barreling away to light a nearby Episcopalian church aflame. Seriously? Where are your critical-thinking skills, Cailee?

All it took to drive a face-palmingly impressionable 10-year-old like Dustin to douse his local parish in gasoline and then drive an RC toy car strapped with lit cigarettes into it was hearing his older brother sloppily play on his drum kit, practicing a terrible original song his “band” wrote.

Most kindergarteners are very easy to influence, but it takes a special kind of suggestibility to be radicalized after hearing a tambourine. Yup, one fucking tambourine, shaken way in the background of the choir’s rendition of “How Great Thou Art” at Marcus’ church. Right in the middle of mass, Marcus’ hips and shoulders began to shimmy uncontrollably to the horror of the congregation. He even shrieked, “God is a slut! I serve the will of the Dark Lord Travis Barker!” as he hurled prayer candle after prayer candle at drapes hanging over the stained glass windows and the priests’ hanging robes. St. Joseph’s was a pile of charred rubble two hours later. Marcus, we get it, you’re 5 years old, but come on.

Though thousands of other kids saw the 1999 animated film Tarzan, heard its Phil Collins-written score featuring hundreds of different drums, and did not burn down the Vatican, it was apparently too much for Carolina’s malleable second-grade mind to handle. Think for yourself, Carolina.

Samantha’s first experience hearing drums started with her eyes rolling back in her head as the drums in The Beatles’ “Hey Jude” built up, and ended with her becoming a convicted juvenile arsonist guilty of causing $2 million in property damage to St. Cecilia’s Parish. How are you going to survive fifth grade if you can’t overcome the pyro urges that Ringo Starr’s drumming stirs in you, Samantha? How?