’90s Kids Rejoice: Nickelodeon Just Announced A Rugrats Prequel Where Stu And Deedee Pickles Conceive Tommy While The Devil Hides In The Closet And Watches 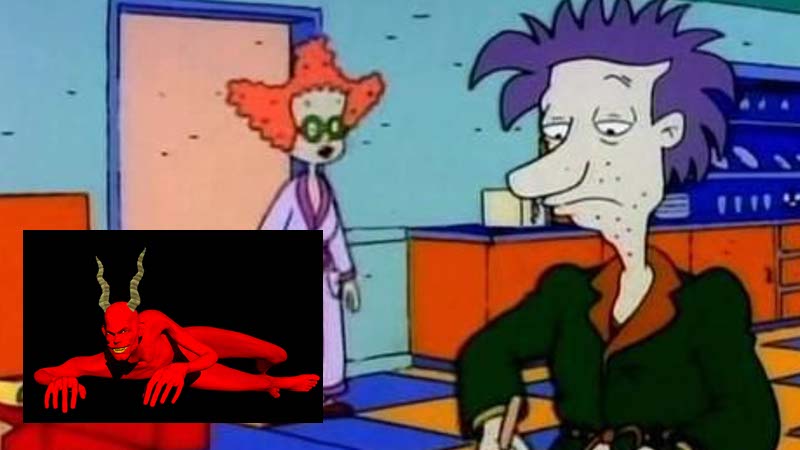 If you watched the classic Nicktoon Rugrats growing up (and let’s face it, everybody did), then you’re going to be absolutely over the moon at this incredible pop culture bombshell: Nickelodeon just announced a Rugrats prequel series where Stu and Didi Pickles conceive Tommy while the Devil hides in the closet and watches!

This is so amazing! We can’t wait to dive deeper into the world of Rugrats and see how Tommy first got cooked up by his parents!

The prequel series is called Rugrats: What The Devil Saw, and Nickelodeon says it will tell the story of the events leading up to the act of sexual congress that caused Tommy Pickles to get cooked up in the womb and then born. It will also tell the story of how Satan, Lord Of Hell, hid in the Pickles’ bedroom closet and watched them conceive Tommy while grinning evilly and thinking about how much he hates Jesus Christ and his father God.

This is so exciting! We’re going to finally have all our questions answered about how Tommy Pickles got cooked up!

The showrunner for the series will be industry veteran Tony Gilroy, notable for such prequels as Star Wars: Andor and The Bourne Supremacy. ““If you’ve ever looked at Tommy Pickles and thought, ‘I wonder how that guy cooked up,’ this series will answer that question for you in a very exciting way,” Gilroy said in a press release announcing the new project. “From the emotional scene where Stu and Didi hang a photo of Tommy over their bed to inspire them to have sex and cook him up, to the moment when a spider crawls across Stu’s face while he’s lying on his back during the reverse cowgirl era of the sex, to the moment when the Devil reaches out of the closet and snatches one of Didi’s New Balance sneakers off her foot during the missionary era of the sex, this series will feature all the key moments that led up to Tommy’s conception in a way that will leaves fans thrilled and breathless.”

In a departure from the original Rugrats, the prequel series will be live action, featuring a cast of incredible actors such as Mark Rylance as Stu Pickles, Julianne Moore as Didi Pickles, Jim Broadbent as the Devil, and Jeffrey Wright as Command Sergeant Major Joel Mitchum. Nickelodeon representatives have even announced that they “found a baby that really looks like that” to play Tommy!

The much-anticipated prequel is already getting some major praise from people who have been lucky enough to see it. The first episode of Rugrats: What The Devil Saw debuted recently during the Venice Film Festival, the first time in its history that the storied festival has screened a television pilot. It received an 11-minute standing ovation and won the same amount of awards as Tár, which isn’t a prequel to anything and doesn’t explain how any of its characters got cooked up.

The episode begins with a cold open on Stu and Didi on their wedding night. Stu asks, “Should we have sex in a way that will cook up Tommy Pickles?” and Didi replies, “No. We must wait for the comet.” The episode then jumps ahead 35 years, to the night when the comet finally reappears in the sky, signaling to Stu and Didi that it’s finally time for them to consummate their decades-long marriage in order to cook up Tommy Pickles: the baby who will go on to slay the evil Angelica.

The episode concludes with a 35-minute love scene between Stu and Didi, during which the Devil hides in the closet and keeps a running commentary of what he’s witnessing. Many of the lines that the Devil mutters to himself during this scene, including “I’ve got to hand it to God, he built Stu’s body for pleasure,” and “Chuckie Finster has five souls and all of them are destined for Hell,” received massive cheers from the Venice Film Festival audience.

This is pretty much the most exciting TV news that has come out all year! Prequels are an amazing way to tell the story of how someone got cooked up, and we’re so happy that the Rugrats universe is finally getting the backstory we’ve been craving for years. We can’t wait to check it out!