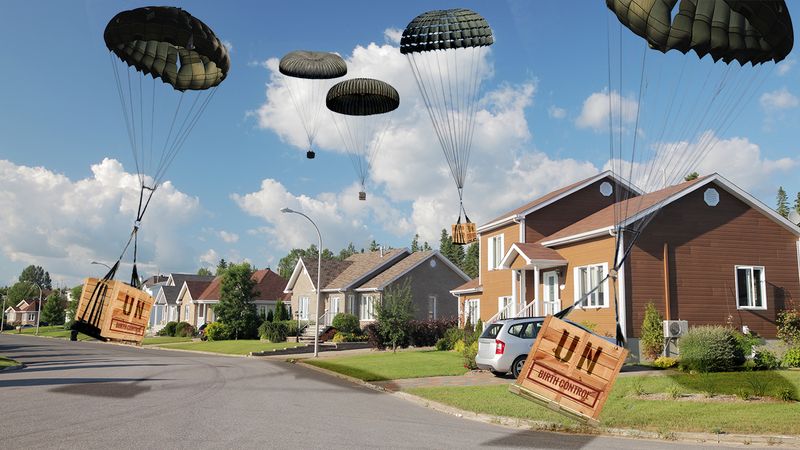 The U.N. just stepped up to the plate in a big way.

Women in the United States have long faced difficulties accessing resources for their reproductive health. As the situation there grows direr every day, the United Nations has officially elected to intervene: The organization will now be conducting emergency airdrops of female contraceptives deep inside the United States.

Wow. Kudos to the U.N. for helping a population in crisis.

The U.N. carried out its first drop of supplies last week, deploying five Boeing C-17s deep into U.S. territory from an airbase just north of the country’s border with Canada. Sixty pallets were successfully air-dropped into open fields across the nation, each packed to the brim with a full metric ton of female contraceptives for American women to use. So far, it seems as though the U.N.’s efforts are paying off, with women clamoring around the drop zones as the health supplies they so urgently need parachute to the ground.

“Resources like these are scarce in America, and only getting scarcer,” said U.N. ambassador Rashmi Patel in a press conference held at the organization’s Geneva offices. “A woman in [the southern-border state of] Texas may have to travel hundreds of miles to get something as simple as an IUD, if she can even afford one at all. The United Nations holds strong in its desire to help and will continue to air-drop these items by the cargo-load until conditions improve.”

The U.N. has focused its efforts primarily in the Central and Southern regions of the country, where access to these critical health supplies is most limited. Still, the organization has vowed to monitor the situation closely and hopes to eventually air-drop birth control and morning-after pills to women in all 50 of the nation’s states, with each kit containing enough to last a woman anywhere from four to eight years.

And as access to proper health care continues to wane for women in the U.S., the United Nations is doubling down on its efforts and will soon begin air-dropping a full range of necessary supplies for female health, including Pap tests, cancer-screening kits, and step-by-step guides on how to do your own breast exam.

The situation in the United States may be grim, but it’s encouraging to know that the U.N. has been able to help American women get their most basic health supplies for the time being. Thank you, United Nations, for always looking out for those in need.